2 Attacks on Kanwariyas over the weekend in UP & Rajasthan – Dozens Injured, 5 Critical 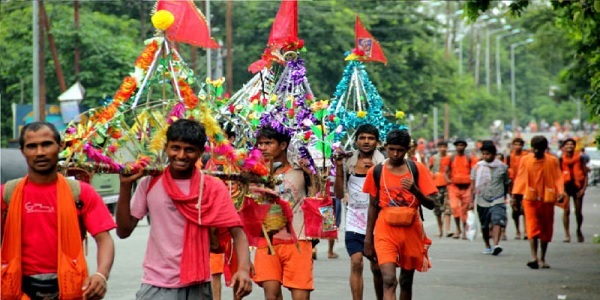 Dozens of kanwariyas (Hindu religious pilgrims) were injured, 5 of them critically, in 2 separate attacks in UP and Rajasthan over the weekend.

In the first case, on Friday night, a group of around 60 kanwariyas were attacked & looted by motorcycle-borne assailants in Farrukhabad, UP. Apparently, the attack was a fallout of an earlier road altercation, but the way 40-50 attackers came well armed with lathis, sharp-edged weapons, rods and even firearms points at pre-meditation. Fourteen injured kanwariyas were taken to Ram Manohar Lohia Hospital in Farrukhabad and four of them are critical.

Around Rs 50,000 was looted from the kanwariyas and their vehicles were damaged. Police has lodged an FIR against unknown persons for assault and dacoity, and is carrying out investigation to nab the accused.

In the second incident, a group of kanwariyas was attacked suddenly with stones and sticks on Sunday night when they were passing by a mosque in Sikar, Rajasthan. Seven kanwariyas have been injured in this attack – Ashok Prajapat, Manoj Prajapat, Mukesh Swamy, Rakesh Sharma, Shravan Prajapat, Lalchand Prajapat and Raju Prajapat. One of them suffered a serious head injury and two to three have suffered internal wounds.

The attack took place on Churu road, behind Bhartia Hospital, when a group of 15-20 kanwariyas was passing by near a mosque and some Muslim youth asked them to stop their DJ music. The kanwariyas lowered the volume of the music and started moving ahead. But suddenly, they were attacked from behind with stones, lathis, iron rods, swords etc.

As the kanwariyas had kanwars (sticks used to carry pitchers of holy Ganga water) in their hands, they could not defend themselves. Hearing the commotion, people from nearby houses came out and soon a large crowd of Muslims too gathered causing more tension. Presently, the situation is under control due to heavy police deployment.

Just a week back, the whole of English-language mainstream media (MSM) was up in arms against the kanwar yatris due to an incident of hooliganism by some kanwariyas in Delhi-NCR. A yatra in which millions of devout Hindus, most from the so-called ‘oppressed OBC/SC’ sections, participate each year, was incessantly vilified as an exercise by rowdies. While it is true that certain elements infiltrate the kanwar yatra to indulge in undesirable behavior and that pilgrims need to show better civic sense on the roads, the truth is that most yatris are pious people on a spiritual journey.

But while typecasting the average kanwariya as an uncultured lout, our left-liberal elites & Hinduphobes in MSM adroitly gloss over the far greater number of attacks & provocations (including meat strewn in their path) that kanwariyas face each year while passing through ‘sensitive’ areas of West UP, Uttarakhand, NCR, Rajasthan.