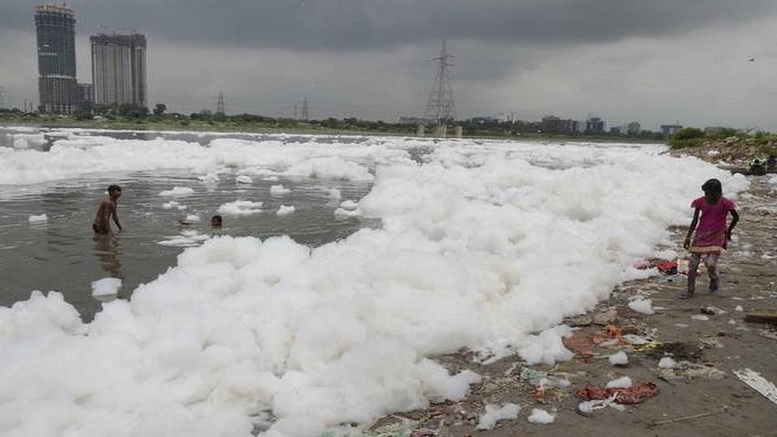 According to the report on the Composite Water Management Index, by the NITI Aayog in the year 2018, 600 million people face high-extreme water stress and about 200,000 people die annually due to lack of access to clean potable water. NITI Aayog sounds warning bells saying the situation is only going to “get worse”, and 21 Bharatiya cities are likely to run out of groundwater by 2020 if this trend continues.

Bharat is the biggest consumer of water in the world, accounting for about 750 billion cubic metres annually, according to the World Bank. The World Bank also says that for a country which accounts for only 4 per cent of the world’s water resources despite hosting 17 per cent of the world’s population, the water crisis is an unavoidable threat Bharat should be worried of. The Central Pollution Control Board (CPCB) estimates that by 2030, Bharat’s water demand is expected to rise to 1.5 trillion cubic metres.

This water shortage has led to excessive exploitation of the ground water resources. Estimate shows that about 15 per cent of our food production and 85 percent of drinking water in Bharat comes from groundwater sources. While concrete jungles and mismanagement of the available water resources have led to depletion of ground water resources in the urban Bharat, the green revolution and inorganic methods of cultivation that also consume more water for irrigation have led to erosion of soil fertility and drastic reduction in the ground water levels in rural Bharat.

Adding to the problems, studies indicate that 70% of Bharat’s water supply is contaminated due to pollution of the river waters and rampant usage of chemicals and fertilisers in cultivation and discharge of untreated effluents by the industry that has eroded the soil fertility leading to contamination of ground water resources as well. This problem is very acute in the cities like Chennai, Bengaluru and Delhi. Studies also indicate that nearly 40% of water supply in Bharat comes from ground water sources.

Bengaluru which is generating 1,600 million litres per day (MLD) sewage only recycles about 600 MLD, resulting in almost 80 percent sewage going waste. In Delhi, which generates waste water of over 2,600 MLD, around 1,600 MLD is treated and 338 only MLD is reused.

There is huge potential in domestic and industrial sectors for recycling water. Four years ago, the Nagpur Municipal Corporation made a beginning by treating and reusing 130 (MLD) which has now reached 480 MLD out of the total 525 MLD the city generates. The central and state government made it mandatory for thermal power stations and industrial units to buy treated sewage from urban local bodies situated within a radius of 50 km and this has become a boon to Nagpur city since thermal power stations are situated near the city.

Electrocoagulation technique is being applied by start-up entrepreneurs in Mumbai to treat industrial effluent and wastewater from industries, and sewage from residential, commercial, and municipal establishments. This technique involves the passing of electricity through pollutants and contaminants to break down their chemical bonds which is considered to be more effective than a simple chemical filtration.

There is an urgent need to bring legislation to ensure that all major cities and towns in Bharat are mandated to go for recycling of the waste waters. This requires not only political will but also commitment and active participation from all the major stake holders viz., Government, Industry and the Society.

The government can think of launching this mission under PPP Model with the collaboration of the industry, commercial establishments and townships so that these collaborators not only become investors but also beneficiaries who can access the recycled water for consumption.

The World Bank estimates that Bharat’s total water and sanitation sector is worth $420 million, with an annual growth rate of 18 per cent and therefore, sustainable water management practices will further improve Bharat’s sanitation sector market value.

Let us hope all the stake holders will realise the gravity of the situation and take immediate long term measures to prevent Bharat from becoming a water scarce country by 2050. If we don’t take timely measures now we will be depriving the future generations of their legitimate right to water resources which is inexcusable.