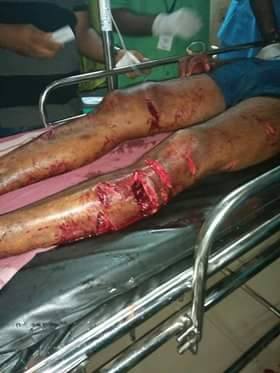 Another RSS worker has been critically injured after being attacked with choppers in CPM-ruled Kerala. RSS Mandal Karyavah Praveen was attacked by a group of unidentified men earlier this evening in Kathiroor, district Kannur.

#Visuals from Kerala: An RSS worker critically injured after being attacked by a group of unidentified men in Kannur's Kathiroor earlier this evening. pic.twitter.com/EvILwO1KtE

Kerala has seen 17 RSS / BJP workers being murdered ever since the Pinarayi Vijayan led CPM Government was sworn in last year.

Kannur district, which also happens to be CM Pinarayi Vijayan’s hometown of Pinarayi, has been the epicentre of the violence unleashed by Marxist extremists and hired killers of CPM.

Incidentally, Kathiroor was where RSS worker E Manoj was brutally murdered by CPM activists on 1 Sep, 2014. In September this year, CBI filed a supplementary final chargesheet for that murder against six persons, including P. Jayarajan, Kannur district secretary of the Communist Party of India (Marxist),

According to the CBI, the murder of Manoj was not an individual instance that happened under sudden provocation on the date of killing. It attributed the motive behind the crime as terrorising people as there had been a huge influx of workers from the CPI(M) to the BJP.