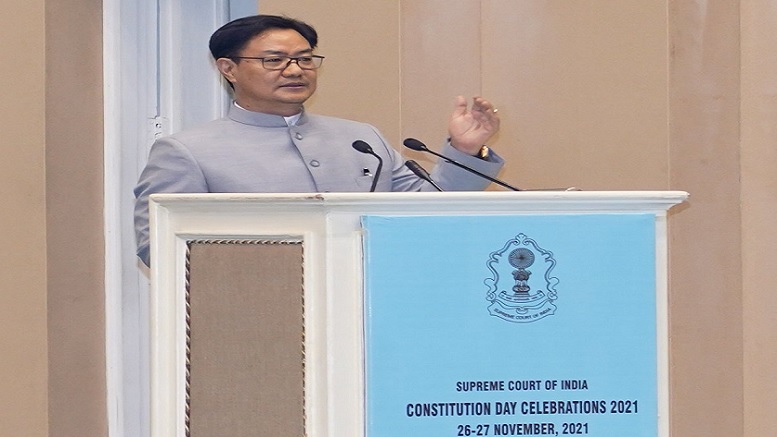 Union Law Minister Kiren Rijiju on Saturday, without referring to farm laws in the presence of the Chief Justice N.V. Ramana and President Ram Nath Kovind, said just like a judgment passed by the Supreme Court, a Bill passed by the Parliament is also law of the land and need to ponder why it is difficult to implement.

Rijiju was speaking at the second day of the valedictory ceremony of Constitution Day celebrations organized by the Supreme Court. He said, don’t want to draw a conflict between fundamental duties and fundamental rights, rather if they are kept together on a plank and observed, then we can make this country great.

Rijiju said: “We cannot see such a situation when the government or court takes a decision. When the Supreme Court delivers a judgment it is the law of the land. Likewise, when Parliament or Assembly passes a law, that is also a law of the land.”

He emphasized that how can a situation arise where a judgment or law passed by the Supreme Court, high courts, Assembly and Parliament, becomes difficult to implement. “Then we have to ponder about it. Whether it is legislature, judiciary or executive or any part of the society. Still, we have to think. Because we are following the Constitution and the country is also going by the Constitution”, he said.

Rijiju also pointed out that he is observing a trend, where some people are too conscious of their rights and do anything to get their rights, but at the same time they forget the rights of others and some also forget their duties.

He added that the government has approved continuation of the centrally sponsored scheme for development of infrastructure facilities for the judiciary at a cost of Rs 9,000 crore.

Rijiju said: “18,735 courts across the country have been computerized so far with software compatibility and interoperability. Wide Area Network connectivity has been provided to more than 98 per cent of the court complexes.”

He said: “The role of judiciary in the adjudication of infrastructure disputes and keeping the larger national interests in mind is crucial for the flow of developmental trajectory and overall project costs”.

He said the Bar being an integral component of the architectural framework of justice delivery, it is as much the duty of the Bar to exemplify the organic link between law, truth and social welfare.