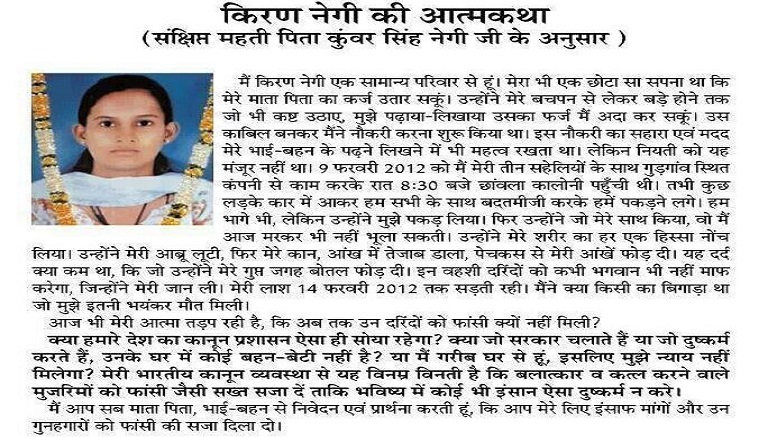 Most of us have never heard of Kiran Negi, in any context. A reasonably well informed person would have heard of Nirbhaya rape and murder case. Kiran Negi case is as much, if not more, brutal, and happened in the same time frame.

A daughter of migrants of poor parents from Pauri Garhwal in Uttarakhand, Kiran lived with her parents and two small brothers in Qutub Vihar, Phase II in Dwarka in south-west Delhi. She was pursuing graduation from a college in Delhi and wished to become a teacher. To supplement the meager income of her father, she also worked as a data entry operator in Gurgaon’s Cyber City.

On the fateful day of 9 February 2012, she was returning home from her work with two other girls. Very near to her house, she was accosted and then kidnapped by three persons- Rahul, 26, Ravi and Vinod, both 22- who had recently come out of prison on bail. She was taken to a mustard field about 30 km away in the village of Rodhai village of Rewari district, Haryana. There, the three took turns to brutally rape her. After the rape, they poured acid in her eyes and pushed broken liquor bottles in her private parts. After that she was left there to die. But she did not die immediately. Waiting for help, weakened by blood loss and in pain and misery, Kiran Negi remained alive for a full four days before dying on the very same field where she was raped, while her rapists probably planned to repeat the same act with another young women.

Her father, was informed about the kidnapping by his neighbours on phone. He immediately went back home and appealed the police to search for his daughter. The police allegedly declined to take any action and asked her family to arrange a car for them to chase the criminals! After a 3 day protest at police station, the police arrested the suspects. They confessed to their crime and led the police to the spot of crime on 14th of February. Due to brutality of criminals and apathy of police, Kiran Negi had passed away just a few hours ago. But for the lethargic and colonial attitude of police, Kiran Negi would probably be alive today and fighter that she was, would certainly be trying to rebuild her life.

The case happened a few months ago that of Nirbhaya, but did not attract the kind of public outrage from wider society. The neighbors of Negis supported their fight, but their voices could not be heard by the media and, by extension, the wider society. The case was ‘fast tracked’ and in 2014, Additional Sessions Court sentenced the three criminals to capital punishment. The High Court confirmed the sentence and the convicts appealed to Supreme Court.

Since then, the case seems to be in limbo. Remember, this appeal was filed in Supreme Court before the Nirbhaya case came there. The parents are unaware of even the name of the lawyer fighting the case. Their fight for justice continues. For Nirbhaya, it took mass public outrage to get justice in 8 years. The criminals were hanged earlier this year.  High Court had confirmed the death sentence in 2014 as it did for Kiran Negi. Supreme Court confirmed death penalty in 2017. Then the charade of review petitions and curative petitions was carried out for some time. Mercy appeals were filed in front of President and even after President rejecting the same, it took months before they were hanged as the lawyers went to Supreme Court against rejection of mercy petitions. The whole drama was clearly to delay the execution and then probably ask for mercy due to undue delay in execution. It must be noted that according to the judgment in T.V. Vatheswaran v. State of Tamil Nadu (1983), the prolonged detention to await the execution of a death sentence is an unjust, unfair, and unreasonable procedure, requiring that the death sentence be quashed and a sentence of life imprisonment substituted. In many cases, convicts have used this to get their sentence commuted to life sentence. In case of Nirbhaya, due to media attention, the judiciary and the government were forced to work a bit faster than usual. Who is to say that in case of Kiran Negi, the convicts will not take this plea if Supreme Court continues with the delay? Under the influence of peddlers of human rights in courts, it would only be too happy to oblige.

Kiran Negi case did not receive publicity, so the judiciary and government seem to be in no hurry. Supreme Court would rather fix the height of dahi-handi and impose Rs. 1 cost on urban-naxals for contempt, than look into cases like Kiran Negi. Even after the judicial delay in Nirbhaya, no rules have been framed to discourage the abuse of judicial remedies for delay of execution of criminals. It is conceivable that the Kiran Negi case will go on for many more years unless it gets adequate publicity in media.

It is widely recognised that the judicial system in Bharat is unfriendly to citizens, inefficient, corrupt, and prone to excessive delays. Yet any bid for reforming the same gets stuck in the government, or if the government approves, in the judiciary. Over the period of time, especially in last 30 years, judiciary has arrogated to itself immense powers without any oversight. The judges are appointed by their own fraternity and as a result, anywhere between 30-50% of High Court and Supreme Court judges are near relatives of previous judges. Many others are friends and juniors of previous judges. Clearly, either the judicial talent in the country is genetically and fraternally transferred or there is widespread nepotism and corruption in appointment of judges. It is travesty for the country that for appointment on the post of peon and safai karmchari, there is an exam, but for appointment of judges in High Courts and Supreme Court, there is direct appointment!

Naturally, meritorious candidates, who could have worked much faster and probably with more zeal towards public good, are disadvantaged if they do not have a father, or godfather, who is well connected. It is no wonder that cases are pending for years, while judges go about their merry business with unconcern.

There might be many more Kiran Negis in the country. Public should not blame themselves if they do not know about them. However, justice delayed is justice denied. The judiciary and governments have to share the blame with criminals for doing injustice to Kiran Negi.

CPM and land mafia are destroying wetlands of Kerala