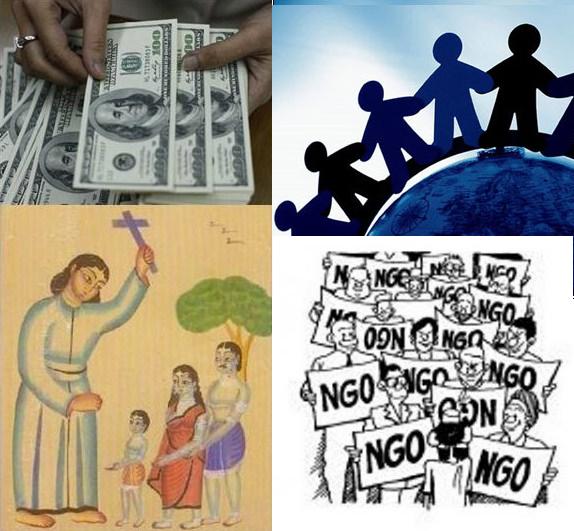 While the menace of missionaries in religious conversion and the impact of FCRA on it, is being discussed widely, the way evangelists use to tap into the 4/14 window, that is the children between the ages of 4 and 14, through foreign funds is hardly exposed.

Missionaries hold a monopoly over the children of this age group through many means. They are so well focussed in their mission that they have plans for every part of the society. From Ryan International, Mount Carmel, St. Xavier’s, etc. for the well off and upper middle class to schools attached with orphanages for the poor, they have everyone covered.

Education in their view is teaching and imbibing Bible and Christian values. They either produce priest material for churches in foreign countries by teaching them theology in the case of orphanages or slowly wipe out the Hindu values from the children in schools run by them through secularised syllabus.

There is one other type which lobbies and does advocacy to facilitate the afore-mentioned actions. A fine example of FCRA’s impact on education is through advocating the Right to Free and Compulsory Education act. While it is touted as Right to Education, it is actually the Right to Educate as it only enhances the monopoly of Christian community in the field of education.

NGOs that advocate RTE don’t stop at just spreading information about admission under the 25% fees free quota, but also campaign to shut down the schools run by the non-minority community for measly rule violations under the RTE act. The impact of FCRA through NGOs advocating RTE can be read in this article.

Why education and why the 4/14 window?

A Bharatiya evangelist Siga Arles writes in his book,

“The community persuaded us to start a quality convent-style educational institution for their children. “You Christians are good in providing good education” they said and called us to serve them! A Macedonain call! This should open a wide opportunity to influence the society and infiltrate the non-Christian community with Christian input.

The monthly parents meetings drew the parents in big numbers to interact with us on “values” and we were shaping the thought patterns and challenging the parents to a value based understanding of the educational process and their role along with us in the growing of their children, the future citizens of the town and villages of our area.

I was excited with the thought that a decade or two will see a vast change for the impact of the Gospel on my people. Children will absorb Christian values. They will know the scriptures and the truth of the Word- the truth will set them free. Their parents also will open up. Mission and evangelism will happen with less resistance.”

Here is an example of how FCRA impacts school and college education through Roman catholic dioceses in TN. Tirunelveli Diocesan Trust Association, the registered FCRA NGO of the Tirunelveli diocese that covers two big districts Tirunelveli and Tuticorin, runs more than 300 schools. After Tirunelveli diocese, Mylapore-Madras archdiocese runs the most number of schools.

A Monaco based NGO Cuomo foundation has provided funds to build dormitories for a school, St. Charles Higher secondary school, run by the archdiocese in a village in Chennai in 2004 and 2010. The same foundation built The Cathedral Free primary school and provided financial assistance for one St. Antony’s Primary school in Santhome and Nungambakkam respectively as a response to the tsunami disaster of 2004.

The foundation has built 7 schools so far in TN all run by the diocese. The seventh school built in Mambakkam, Chengalpattu featured in Times of India few days back for receiving ‘Platinum – National excellence rating from the Indian Green Building Council, for energy efficient design.’

What is curious about this NGO is that its founders are well connected enough to secure a meeting with the pope for one of their beneficiaries from TN albeit it being during a public appearance.

A webpage of Pondicherry Archdiocese says ‘Through Educational ministry, they (missionaries) had done the Evangelization of our diocese’. The Pondicherry- Cuddalore Archbishop’s education fund receives money from LWA- Little Way Association, London, Kindermission, Germany and from Archbishop’s Personal Friends and Benefactors living abroad.

As a part of its school development programme in partnership with the Roman Catholic Church, the Monaco based Cuomo foundation runs two scholarship schemes, one for gifted students from schooling to university and another for girls who are in the final year of school.

Catholic institutions give preference to Catholic students and consider non-Christians only after Christian students’ demand is met out. While it is the church’s right to admit whoever it wants, such financial muscle gives rise to the general belief that Christians are good at providing education and those who are economically weak would find it better to convert to Christianity if it gives them the chance to get the kind of education they want.

An example of this would be those who opt for Vellore Christian Medical College. In 2018 the institution admitted 74 out of 100 seats based on recommendation from missionaries attached to it across Bharat. Students who can answer questions from the Bible are supposedly given 5 marks for the ability during the multi stage interview.

Times of India reported parents being disappointed at not being able to secure a seat in the institution, and students said they would opt for it as it charges low fees compared to other self-financing institutes.

So many orphanages in a supposedly developed state of TN should raise suspicion among the so-called rationalists of a well educated society. A real rationalist would wonder if there really are that many orphans in the state for the necessity of such a huge number of orphanages. But neither the society that is affected by this devious plan nor the donors who dole out money through FCRA seem to think about it.

Here is an FCRA NGO receiving enough money to build and run a school with accommodation which it likes to call as an orphanage as it helps get funds from abroad to evangelize.

Tragically, there have been innumerable incidents of children being abused, raped, harassed, brainwashed, sold off or trafficked, and even murdered at these Christian ‘orphanages’. There was one case of girl children being trafficked to a children’s home as infants, mothers either duped into believing their child died during birth or promised a good life with education for their daughters, the girls were at the end brainwashed to believe that their life inside the four walls of the ‘home’ was spectacular and ended up fighting in support of the missionary who made their life hell instead of being reunited with their families like the court instructed. It was the Mose Ministries Saga. It involved every form of inhumanity except murder.

+The school is Govt.-aided. Many Tamil MSM narrate how poor parents from many districts were canvassed by the school+Orfanaje authorities to leave their kids in this Org, in the lure of free food+education. Tamil MSM https://t.co/BPfjQ7piIy shows a Painted Board 2/n

Assuring free food, accommodation to poor children and luring them in the name of education, FCRA enabled organisations commit crimes in the hope of absconding to foreign lands with their influence/connection acquired through FCRA.

In the Mose Ministries case, the accused pastor absconded to Germany from where he got funds to run the orphanage. Another pastor, Robin Vadakkancheri, impregnated a girl who came to the computer class run by his church, made her deliver the baby in a hospital under his control, transferred the baby to an orphanage run by the church, made the girl’s father own the crime by threatening him and tried to escape to Canada but was nabbed before he could do so.

Vadakkancheri was the manager of a school run by the diocese, spoke against sexual abuse of kids and even alerted the cops on a sex racket to keep the facade of a pious Father. He did all this with the church in the know and not reporting to the police. These are the kind of people we hand over our kids to because FCRA enables such monsters to establish and run educational institutions in a huge number. Parents are so desperate that they even sit on dharna requesting an Archbishop to not close down a school.

+Ppl protest in front of Archbishop Yvon Ambroise' house who has directed St. Anne's school (run by Diocese) to be closed. Ppl want school to continue. They demand transfer of the Archbishop as he treats parents with disdain.https://t.co/9HTHj5lAFG

There are more such attempts to evangelize children through education, some of which are summer camps, GK classes, secular NGOs working on environment, RTE, Health, etc. There is one main player in this FCRA-Education domain. Even though they don’t really get involved in the field of education directly, the Child Care Units of governments do play a huge role in getting access to the children in schools. Child care officers predominantly belong to one religion – this could be nothing but a coincidence to the minds of the gullible who refuse to see the elephant in the room.