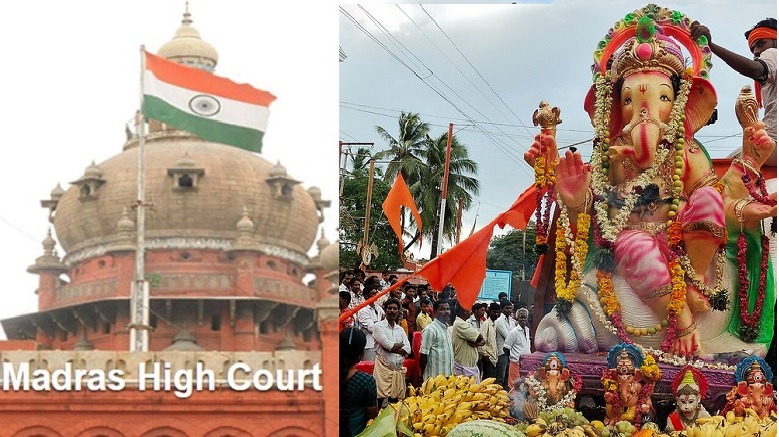 Usually it is Uttar Pradesh, Bihar or perhaps Madhya Pradesh from where we hear news that Muslims wouldn’t let Hindu religious processions pass through streets in which they live or the ones where mosques are located. But this time such news comes from Tamil Nadu, with the High Court rapping the individuals who curbed Hindu religious freedom.

As per the report prepared in 2013, the village had a population of 10,750 out of which 5600 were Hindus and 5150 were Muslims. The cause of the issue is said to be the little land parcel of 0.31 ha used by Hindus to park the temple chariot. There is a dargah near the land and even Muslims have been using it for their festivals and other purposes. Reportedly there were scuffles over the usage of the land but they were resolved at the local level through peace talks organised by community elders.

However from 1980 outsiders from certain organisations started goading the Muslims into creating trouble and boycotting peace meetings. In 1951, the first ever recorded instance when there was disagreement over using the land, both communities promised to keep peace and withdrew cases filed against each other. They also agreed to remove encroachments in the same space however it’s unclear which community was encroaching it.

In 1984 Hindus built a new temple chariot and parked it near the old one in the ‘disputed’ land. There wasn’t any disagreement over the same then. But in 1990 during Ramzan some Muslims reportedly opposed the temple chariot passing through their houses saying the street has narrowed and the chariot will damage their houses. It is to be noted here that the street, another source of the dispute, is called ‘Raja Veedhi’ (Veedhi means street). Most of the streets surrounding temples are named Raja Veedhi, Veli Veedhi, Ther Veedhi, etc. The place where temple chariots are parked is called Ther Mutti (Ther means chariot).

When Muslims raised objections in 1990 the municipal engineer gave a report that both the street and the chariot were fit enough to pass through. From then on the festivals and processions were conducted smoothly, the same way they were happening from time immemorial. Reportedly Muslims also participated in Hindu festivals as a show of religious harmony and vice versa. But again in 2012 trouble started with local Muslims, especially youth being radicalised by PFI. The report says Muslims objected to the chariot passing through their street in 1990 only after the provocative speeches of Palani Baba, a notorious Islamic fundamentalist.

Palani Baba is said to have mocked Muslims who agreed to attend peace talks with the Hindus and even provoked them to burn the chariot. Hindus sent a complaint to the CM special cell and police protection was given to safeguard the chariot. After that the bitterness between the communities is said to have grown to the point where Muslims vehemently started opposing the chariot passing through Raja Veedhi. In 2009 leader of TMMK, a Muslim party, wrote a petition to the district collector asking for a toilet to be built in the land where the temple chariot is parked.

Popular Front of India is also said to be behind radicalising Muslims of the village which led to them erecting a banner hurting Hindus’ religious sentiments. Hindus took it up with the local administration through legal means. An investigation ensued and it was proposed in the peace meeting that the said land parcel should not be used for political or other ideological purposes and prior permission should be obtained from Regional Divisional Officer and police department before conducting any event. While Hindus are said to have readily agreed to these conditions some of the Muslims didn’t agree and didn’t sign the peace accord.

Following this throughout the year, Muslims kept objecting and filing complaints against conducting Hindu festivals. In peace meetings organised by the local administration to resolve the issues Muslims kept raising new concerns even though Hindus were ready to sacrifice a lot.

In multiple instances from 2012 onwards Hindus gave up their rights inorder to not antagonise Muslims like changing the time of procession to accommodate functions in Muslim houses, changing the direction of entrance to temple Mandapam in respect of Muslims’ religious ‘sentiments’, etc. Yet Muslims kept coming up with new ‘concerns’ to object to allowing these processions of deities and the chariot. At the end Hindus agreed to not play traditional instruments that are used during processions and chariot festivals, not to chant slogans, pass the mosque quietly, etc and only then were they allowed to conduct the festivals.

As if crushing Hindus’ religious freedom like this was not enough, Muslims went to court against granting permission to conduct the festivals. However that petition is said to have been dismissed by the court. The court also directed police to provide protection during the festivals.

But the problem persisted and Muslims threw stones at a wedding party that consisted mostly of women (a custom of women carrying fruits, sweets, coconut, etc during marriage, ear piercing, celebration of puberty is prevalent in TN). Even though Muslims accused the party of raising objectionable slogans to hurt their religious sentiments and hurled stones at them, government officials and police clearly said that it was Muslims who threw stones at the wedding party and initiated the scuffle.

Then they created a ruckus during the Masi Magam festival in 2013 when Hindus gave up their rights yet again to conduct the festival peacefully. Hindus agreed to not use loud speakers, not burst crackers, and ban folk dance(Karakattam). Digital boards that display images of gods and chants are usually put up during temple festivals. In villages, temple festivals are a pompous affair full of colour, sound and crackers. But Hindus had to forego even the right to place digital boards without getting prior approval from the district administration on what they’re displaying.

Mosques till today use cone speakers in mosques. But Hindus were forbidden from using cone speakers and advised to use only the box type ones. Even where they can place those speakers was dictated by Muslims. Despite Hindus having bent over backwards to accommodate all the shenanigans of Muslims, they filed a petition in Madras High Court demanding that the festivals be banned.

Live Law reported that Muslims objected to ‘Hindu festivals terming them as Sins and contending that the areas were dominated by the Muslim population’. Festivals were held from 2012 to 2015 with restrictions as directed by the court and the local administration. But in 2018 Hindus felt the conditions put forth by the Regional Divisional Officer were too constraining  and challenged the same in Madras High Court. The local jamat filed a petition against this asking for the festivals to be banned. But the court ruled that Hindus can conduct the festivals subject to some conditions.

Hindus appealed against it, pleading to be allowed to conduct the festivals as they were in the past, temple chariots and deities passing through all the streets. It came for inquiry before the division bench consisting Justice Kirubakaran and Justice Velmurugan who have rapped the Muslim fundamentalists and the authorities for not allowing decades old Hindu practice to be followed just because Muslims are no more a minority in the village.

They further said that “The temples are there for decades together. Merely because a religious group got settled in a locality and has become vociferous, they cannot object to the custom of taking Temple’s procession through all the streets in the Village“. The judges ordered the authorities to ensure that the temple procession passed through all the streets of the village similar to how it was done in the past and that they can only regulate to ensure that no untoward incident occurs or any law-and-order problem arises.

It does appear that the court upheld the rights of Hindus under article 25. However Hindus themselves were gullible enough to accept in the court that they will not conduct the procession in which the turmeric water would be sprinkled on the third day of the annual festival. The history of this case shows exactly what is wrong with Hindus. Even when the constitution is in favour of them they would readily forgo such basic yet important rights in the name of brotherhood which the other side clearly doesn’t exhibit.