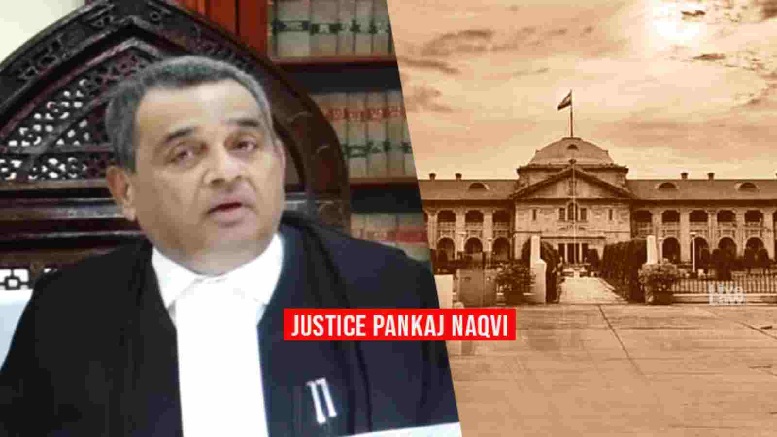 Bharat’s judiciary is a unique institution unmatched by any other in the entire world. Unlike other democracies where the judiciary is ultimately answerable to elected representatives, our judiciary appoints its own successors through the opaque collegium system. It has also evolved something known as ‘basic structure doctrine’ under which judges can strike down any Constitutional amendment passed by Parliament which they deem violative of the said ‘basic structure’ and Constitutional ‘idea of India’.

Hence it did not come as a surprise when retiring Allahabad High Court Judge Pankaj Naqvi, in his farewell speech imparted a unique lesson in secularism by stating –

“Constitution is our bible, we can live and die for the Constitution”

Quite an interesting turn of phrase: comparing a man-made document that citizens of a nation agree to abide by and which contains a mechanism by which the same document can be amended based on new socio-political realities, to a revealed scripture which claims to be the infallible and final word of God! For the record, Bharat’s Constitution has been amended 105 times since it was adopted in 1950. By contrast, the American Constitution has been amended only 17 times after 1791!

But then again, in a nation where the idea of secularism has been pontificated to death, such secular fundamentalism/fanaticism (the commitment to ‘live and die’ for a book is what one would expect from a crusader) should not come as a surprise. And neither should the comparison of our Constitution with the holy book of a ‘minority’ religion: it is a Freudian slip which shows that for our elites, the Abrahamic religions are ‘real’ religions as they have a central book, whereas the more diverse and all-encompassing Hindu Dharma is looked at askance, forever asked to justify itself at the altar of the ‘essential practises’ test. And the milords have even gone so far as to say that even if a Hindu religious practise is deemed essential, it can still be struck down!

Justice Pankaj Naqvi’s around eleven-year-old tenure as a judge of the Allahabad High Court came to an end on August 21 and in his retirement speech, he recounted the teachings of his father and the values which he passed on to him.

“I was the offspring of an inter-religious marriage,” Justice Naqvi said. Remembering his father, he said that his father imparted 2 ‘basic values’ in him. First being, ‘there is no religion superior to the religion of humanism’ and second being, ‘always be secular in your approach’.

“You can’t be a good Hindu, you can’t be a good Muslim, unless you are a good human being…Religion is something very personal, it should remain confined within 4 walls of the House. The moment religion comes on the road, it ceases to be a religion. Today, in retrospect when I look at these words, how true are these values.”

These lines have been repeated so many times that they have taken on the shape of ‘gospel truth’ (again borrowing from the Christianized vocabulary which is in vogue) among the English-speaking classes of Bharat.

But should Dharma, incorrectly identified as a mere religion, be confined to the four walls of the house? Should temple visits, yatras like rath yatra or kanwar yatra, group pilgrimages like Char Dham, Sabarimala, and community celebrations of festivals like Holi, Diwali be banned? Sure, our secular state is trying everything in its power to ‘reform’ Hindus and truly confine practise of Dharma to just our homes – to have Hindus act as atomized individuals who have no sense of community or their collective civilizational and Dharmic heritage. The secular state would like Hindus to just worship one book – the Constitution.

Of course, ‘minorities’ like Muslims and Christians pay no attention to the such secular ramblings – they dismiss it with such contempt that it doesn’t even merit a response from them. They are clear – their religion comes first and they will tolerate the Indian Constitution as long as it is not in conflict with their religious guidance. These things are brushed under the surface in our public discourse, but did you know that one of the leading Islamic bodies, Jamaat-e-Islami Hind (JIH) acknowledged that it “upholds India’s Constitution” for the first time ever in 2010! That too, only after it was hauled to court by a rival group seeking a probe into its ideology.

JIH has also been reluctant to endorse democracy and till recently asked its members to skip elections. It’s constitution exhorts its members to boycott the judiciary, saying “every member of the Jammat shall have to endeavour that he/she should not go to un-Islamic law-courts for settlement of matters except under compelling necessity;”

Other influential Muslim bodies like AIMPLB (All India Muslim Personal Law Board) and JUH (Jamaat-e-Ulema Hind, body representing the most-important Sunni Deobandi seminary) have time and again held that Muslim personal law, including regressive medieval practices like Nikah Halala and polygamy, is derived from the Quran and thus cannot be challenged under the Constitution.

The head of the Syro-Malabar Catholic Church told Kerala High Court that he is ultimately only answerable under ‘Canon Law’ (body of laws made within Christian churches) and that “only the Pope had the authority to take action against him”.

Justice Pankaj Naqvi and others like him can deliver all the sermons they want about keeping religion private; for the lay Christian and Muslim, their religion and religious leaders come first. Indeed, the secular fundamentalists like Pankaj Naqvi, Justice DY Chandrachud etc also know this, and hence all their messages are primarily targeted towards Hindus. It would not be amiss to say that they derive their power by imposing their interpretation of ‘Constitutional morality’ on the Hindu majority.

It is now up to Hindus to realize the true nature of the Indian state, and to reclaim their right to publicly practice Dharma and uphold it as the essential root of our civilization. The Constitution is a modern-day document that is designed to reflect the common identity, aspirations and will of the people. Dharma is eternal.