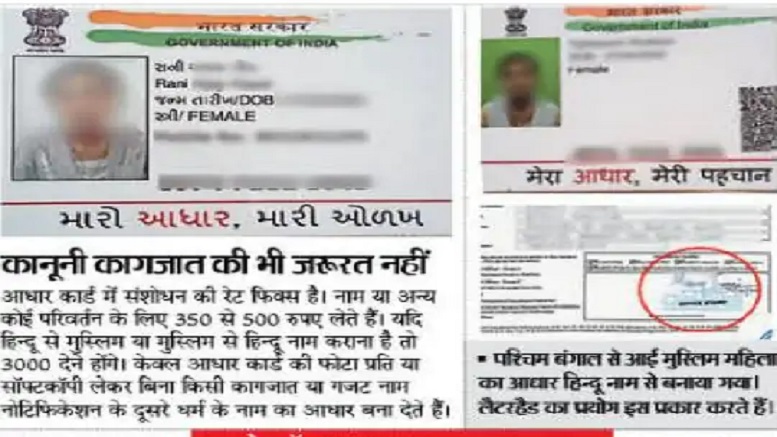 Even though the Gujarat state government has implemented a law against forcible or deceitful conversions such as those achieved by hiding one’s true identity to entrap girls, new information has emerged about how even this new law could be subverted.

A report in Dainik Bhaskar newspaper indicates that there is an entire mafia that aids and abets the identity fraud. It is alleged that certain government-authorised Aadhar centres are running this racket of making Aadhaar card name change amendments without proper legal documents. There is a rate card – Rs 350 for a simple name change and Rs. 3000 for changing name from one religion to another.

A case has also come to light where a Hindu girl got married to a Muslim after converting her religion in the Aadhar card. This way, one can just skip the formal conversion process, which as per Gujarat’s new Freedom of Religion (Amendment) Act mandates that the person who wishes to get converted for marriage needs to inform the district magistrate in a prescribed form. It must be noted that this particular section of the new law has been stayed by Gujarat HC, and the Gujarat government intends to appeal this decision in Supreme Court.

Investigations by Bhaskar revealed that for a name change from one religion to another, one needs to produce an application on the official letterhead of an MP, MLA, Corporator or class-1 gazetted officer. But the Aadhar center operators claim that they can ‘manage’ such letterheads as long as the money is paid. So not just for grooming jihad, such manipulation also means Aadhar cards could now be issued to Bangladeshi and Rohingya infiltrators in Hindu names.

The Bhaskar reporter asked whether his ‘friend’ Aejaz could have his name changed to Ajay, and was told to pay Rs.3000 and it would be done. He was also sent samples of the sort of official letterheads that were needed, and told that these would be managed for him.

It is not known whether such letters are being forged or it is being done in collaboration with corrupt officials. Other questions that arise – are the checks and balances around the Aadhar update process sufficient? Are they somehow being bypassed? Is the Unique ID portal itself being hacked in some way? All those answers can only emerge after a thorough probe by central and state agencies.

Experts told Bhaskar that a change of religion is not legal without gazette notification. This may very well be true, but once someone is able to change their name and religion on the Aadhar, the requirement for ‘legal conversion’ becomes moot. Especially if the girl is whisked away to some other town and given this new identity.

Surat Collector Ayush Oak told Bhaskar that if someone wants to change his or her religion on the Aadhar card, approval was needed from the district collector. But the evidence unearthed by Bhaskar hints otherwise.

There is another angle to this entire mess. Last month, the Gujarat chapter of the Jamiat Ulema-e-Hind filed a petition in the High Court, claiming that some of the amended sections of the state’s new Freedom of Religion (Amendment) Act were ‘unconstitutional’. The Gujarat HC division bench of Chief Justice Vikram Nath and Justice Biren Vaishnav then terminated Section 5 of the Act which mandates prior permission from the district collector (aka district magistrate) for anyone converting their religion, as well as for the priest/clergy conducting such conversion.

So now that no approval is needed from the district magistrate for conversions, what does that mean for the Aadhar name/religion change process? In a nation plagued by illegal immigration, mass conversions endangering social harmony, and which anyway has limited law enforcement capacity, are important checks and balances to ensure social harmony and national security being sacrificed at the altar of so-called ‘personal freedoms’? Why are sections of the judiciary against subjecting conversions to additional scrutiny, when even an ordinary person can see the havoc being wreaked by conversion gangs operating with impunity all around?