A review of “Operation Lebensraum: Illegal Migration from Bangladesh” 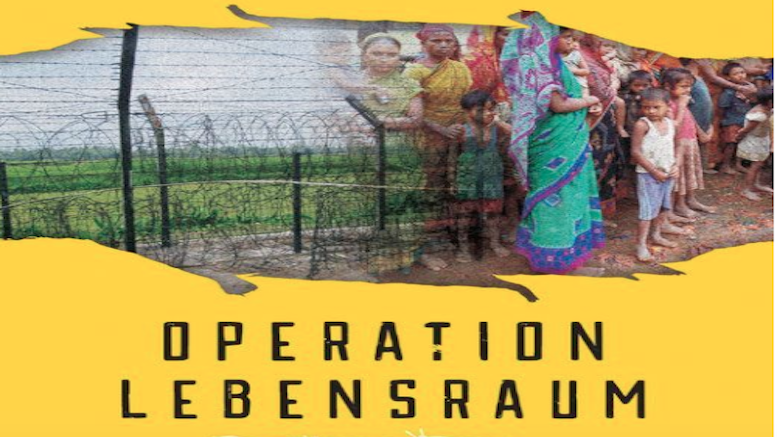 I first came across this book by Hiranya Kumar Bhattacharyya (ex-IPS) when I was listening to a lecture presented by Mr. J. Sai Deepak on illegal immigration. As the content of the topic was engrossing and thought provoking, I eventually had to go and purchase this book coupled with other books related to the same topic.

Let me share with you some of the most interesting parts of this book:

1.) Beginning of the problem

The British were the first to make Bengali the official language of the state of Assam in 1837. In 1905 Bengal was partitioned on the basis of religion (East Bengal as Muslim dominant & West Bengal as Hindu dominant). As we know that parts of East Bengal (present day Bangladesh) have a very low-lying area which often gets flooded even after moderate amount of monsoon; submergence of their landmass into the Bay of Bengal is a national security worry for the state of Bangladesh in the near future. All these early factors were the primary reasons for large amount of Bengali Muslim population coming into Assam and West Bengal and settling down in the most resource rich areas.

2.) How deep rooted is this problem?

All these illegal immigrants have become voters in the assembly as well has national elections of Bharat. These illegal immigrants have been helped by certain vested interests who have categorically gone on to legalise these people for over a century now. Even the Supreme Court of Bharat noted in its judgement that ‘’There is a push & pull factors in these illegal immigrations in the state of Assam’’. There have been reports of Rohingya Muslims being settled near the cantonment area near Jammu. The larger question is that who are the people helping them settle in not only West Bengal or Assam but also in rest of Bharatiya states?

These illegal immigrants have now become voters in the state of Assam and West Bengal (all thanks to the appeasement politics which has been going on in these states for decades now by regional leaders as well as negligence by New Delhi even after consistent demands from All Assam Students Union aka AASU).

4.) Idea of a ‘Greater Bangladesh’

This is something that Pakistani ISI and Bangladeshi DGFI (Directorate General of Forces Intelligence) are working on by building radical mosques in the bordering states of Assam and WB. They have done the same in Myanmar as Rakhine state in Myanmar is part of the agenda of creating Greater Bangladesh.

This subversive idea has been supported by China too as it will help China cut Bharat’s North East from the mainland through the Siliguri corridor, allowing it access to Chittagong port in Bangladesh. This dangerous dynamic might lead to separatist movements demanding unification of Muslim dominant areas of Assam, West Bengal, Meghalaya, Tripura, Jharkhand & Bihar with Bangladesh if we don’t address them sooner than later.

There are many such explosive revelations in the book. I would highly recommend you to read it once and call out this elephant in the room. I don’t see may people addressing this issue. Bharatiya policy makers have always been somewhat apathetic towards the North East. Recently it has changed, post 2014, but a lot more is to be done if we are really serious about fixing this issue until it’s too late.

The NRC that is being demanded by AASU since independence has finally been conducted on 31st August 2019 under the BJP government. 19 Lakh people were found out to be illegal immigrants in Assam alone. Few months later CAA was passed a nationwide NRC was proposed.

The reaction which happened after that by vested interest groups throughout the country with regards to destruction of public property, Shaheen Bagh, Delhi riots are all linked to each other and are out in the open for the public to see. This issue must be dealt with an iron hand before it slips out and becomes another Kashmir on the eastern border of Bharat.

HinduPost Note: ‘Lebensraum’ is a concept which originated in Germany and refers to the additional territory which a group, state, or nation believes is needed for its natural development.