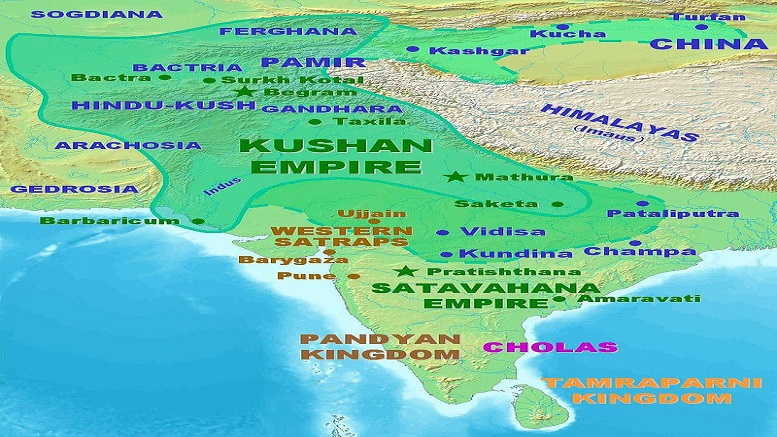 How do people forget their past? By deliberate suppression going beyond destruction of religious or artistic images; genocide of people and their expulsion, as in the case of the Yazidis in Iraq and Turkey and the Pandits in Kashmir; or it could be people switching to a new language of prestige and then slowly become separated from their history.

The Tarim Basin in Xinjiang was Kashmir’s twin but it has forgotten its past, and so have we.

The entire region was a part of the Sanskritic world for centuries. It was called Uttarakuru (perhaps the origin of the word Uyghur) in Bharatiya texts and its languages included Bharat’s Prakrits like Gandhari that has some similarities with Kashmiri, Sanskrit, and Khotanese Saka, which itself has much Sanskritic vocabulary. We have attestation of the name Uttarakuru in local accounts. For example a Tocharian B text from Kucha speaks of Uttarakuraṣṣe = Uttarakuruvāsī उत्तरकुरुवासी. Megasthenes, Strabo and Ptolemy also use this name for the region.

According to the Chinese pilgrim Xuanzang and Tibetan translations of Khotanese documents, Khotan was founded by immigrants from northwest Bharat during the third century BCE reign of Aśoka Maurya. These immigrants most likely included Kashmiris.

The region was part of the Kushan Empire of Kaniṣka in second century CE. After the rule by the Kushans, the next centuries became the golden age of the Tarim Basin, and various Indic city-states thrived along the Silk Road: Kashgar, Khotan, Turfan, Kucha, Niya, Loulan, among others.

The centrality of Kashmir to this area if clear from the fact that Kaniṣka chose it for the Fourth Buddhist Council. A stream of scholars and adventurers left Kashmir for the Tarim Basin to seek fame and fortune and to take Indic ideas to Chinese regions. In the eighth century, the Kashmiri Kārkoṭa king Lalitāditya Muktāpīḍa marched with his army to this land.

The most prominent of the Tarim Basin states was the Kingdom of Khotan (Gaustana or Gosthāna in Sanskrit) that lasted until 1006 CE. During the Tang Dynasty, it came under the influence of China. The Tibetans became dominant by the end of the 8th century. By 860, the Uyghur Turks were forcing the Tibetans back.

Along the hills numerous Buddhist cave sanctuaries came up. Two especially famous sites include the Kizil Caves, 65 kilometers west of Kucha, with Bharatiya artistic motifs, and the Bezeklik Thousand Buddha Caves between Turfan and Loulan. The Kizil Caves are said to be the earliest Buddhist temples in today’s China. A final struggle with Kashgar began in 971.

The Bezeklik caves had activity until the region was conquered by the late 14th century Chagatai Khanate ruler Khizr Khoja in a jihad. After being converted to Islam, the descendants of the previously Buddhist Uyghurs in Turfan soon lost memory of the origins of the caves and the art therein and falsely believed that the “infidel Kalmuks” (Dzungars) were the creators of these Buddhist monuments.

Even before this, things were changing all over central Asia. A Turkic group, the Karakhanids, began raiding the Persianate Samanids for control of Samarkand (known to Alexander by the Sanskrit-sounding name Marakanda), seizing that city in 1000. Pushing east, the group had earlier conquered Kashgar and then fought against Khotanese kings named Viśa’ Śūra (967), Viśa’ Dharma (978), Viśa’ Sangrāma (986), and Viśa’ Sagemayi (999) for several decades. (The name Viśa’, the family name of the Khotan royalty, is a contraction for Vijita, “conquered”.)

The region was completely Turkified and Islamicized by the 14th century. It became part of the Chinese Qing Dynasty in the 18th century.

At the time of the Qing conquest, Dzungaria was inhabited by the Dzungar people, a steppe dwelling, nomadic ethnic group who followed Tibetan Buddhism. In a horrible episode of history, the Qianlong Emperor of the Qing dynasty ordered a mass extermination of the Buddhist Dzungar people after a revolt. Scholars estimate that nearly 80% of the Dzungar population of about a million were killed by a combination of warfare and disease during or after the Qing conquest in 1755–1757.

After wiping out the native population, the Qing government repopulated the area with Han, Hui, Uyghur, and Xibe people together with Manchu Bannermen.

Satuq Bughra Khan was one of the first Turkic rulers to convert to Islam in 934. According to Tazkirah Bughra Khan, Satuq’s conversion took place when he was twelve. His teacher in Islam was a Samanid merchant from Bukhara named Abu an-Nasr, who was befriended by the Khan of Kashgar, Satuq’s step-father and uncle Oghulchak Khan, and was granted permission to build a mosque in the town of Artux just outside Kashgar. Here Satuq would often come to watch the caravans arrive and this is how he met Nasr.

Oghulchak Arslan Khan was the last Karakhanid ruler professing native Turkic religion of Tengrism. Satuq kept his conversion secret from the king, but the king heard a rumor to this effect, and he demanded that Satuq build a new temple to Tengri to show his faith. Nasr advised Satuq to pretend to go along, and in the meanwhile issued a fatwa that permitted Satuq to murder his step-father, the Khan, after which he conquered Kashgar.

Khotan experienced waves of jihads unleashed upon them by the Karakhanid leader Musa, the son of Satuq Bughra Khan, although the jihads were unsuccessful, and the Khotanese managed to briefly seize Kashgar. Khotan was finally conquered in 1006 CE when 140,000 mujahedeen under Karakhanid leader Yusuf Qadir Khan attacked them.

The cave monasteries in the Tarim Basin and beyond had served as repositories of literary and religious books. The Islamic conquest of Khotan set off an alarm in the east and Dunhuang Cave 17, the Library Cave, which contained Khotanese literary works, was sealed for posterity.

The unveiling of ancient Xinjiang texts began with the Bower Manuscript in 1890 in Gupta script (~450 CE) that was later deciphered to be an Ayurveda text that has much material from the Caraka Saṃhitā. The texts in the Dunhuang caves, written mostly in the Brāhmī script, were rediscovered in the decades after 1900. One of the principal names associated with the discoveries is that of Aurel Stein, who was also a Sanskrit scholar and who was to translate Kalhaṇa’s Kashmir history called Rājataraṅginī.

In 1907, at the Mogao Caves near Dunhuang, also known as “Caves of the Thousand Buddhas”, he discovered a printed copy of the Diamond Sutra, the world’s oldest printed text, dating to 868 CE.

The International Dunhuang Project collects and coordinates scholarly work on these manuscripts.

Here’s some Khotanese vocabulary to understand shift in sounds from Sanskrit (which, as I mentioned, continued to be used in Khotan):

Bharat has forgotten Khotan. Here’s what a Khotanese poet wrote about memory and love over a thousand years ago:

In the time for the awakening of love, the flowers grow

I need this rose, lovely to smell and behold

Yet if the rose should fade in my hand

I need no more the rose to remind me of you.

(This article was first published on medium.com on July 10, 2020 and is being reproduced here with permission, after minor edits to conform to HinduPost style-guide)