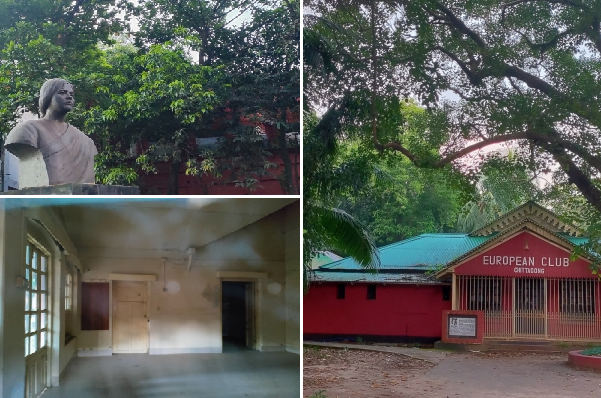 The armed revolution against the British was not mens affair only. Veerkonnya Pritilata, Bengals first female martyr, led a successful raid and attack on white supremacist club named, Pahartali European Club, with around 40 revolutionaries. But avoid being captured by the British, she committed suicide on September 23, 1932. Her martyrdom at the tender age of 21 years sent waves of inspiration for other revolutionaries in Bengal.

But Bengal has forgotten the martyrdom of the 21-year-old girl’s supreme sacrifice to free her motherland from the British rule.

History is replete with examples of valour, grit, and determination exhibited by the freedom fighters against the British. While some of them feature prominently in history textbooks, others have never received their deserved recognition. Veerrkonya Pritilata is one such forgotten revolutionary.

The Pahartali European Club had been used as an engineering section of the Bangladesh Railway till 2020. It has remained vacant for a year with no plan yet to save it.

Pritilata, through her heroic example, sent out a message to the women of Bengal that they can march shoulder to shoulder with men in liberating Bharat from the British.

Revolutionaries, led by Pritilata Waddedar, were tasked to attack the British officials in the European club on September 23, 1932. She was to lead a group of 40 people. Pritilata disguised herself as a Punjabi man while others wore shirts and lungis. The revolutionaries laid siege on the club at 10.45 p.m. and set it on fire. During the raid, one woman was killed while four other men were injured. The revolutionaries came under a counter-attack from the police officials stationed inside the club.

Kalpana Dutta, the legendary revolutionary, recounted in her book “Chittagong Armoury Raiders”, how Master Da Surya Sen, the top leader, was against the idea of handing potassium cyanide capsules to Pritilata Waddedar.

“I don’t believe in suicide. But she forced potassium cyanide out of me when she came to bid her last farewell. She was so eager and argued so well about its need in case she was trapped. I could not hold out. I gave it to her,” Master’da narrated.

The participation of Pritilata Waddedar and her eventual martyrdom, therefore, became crucial as the armed revolution was largely a men’s affair.

Pritilata was born to Jagabandhu Waddedar and Pratibha Devi on May 5, 1911, in Chittagong, Bangladesh. She was a bright student since her childhood. Her father was a clerk at the municipality offices and barely managed to make ends meet. Despite financial difficulties, Jagabandhu Waddedar provided his daughter good education. “My hopes are bound up with you”, he would often tell Priti. She exhibited signs of estriking intelligence’ as a student at the famous Khastagir girl’s school in Chittagong city.

Pritilata completed her matriculation in 1927, followed by her Intermediate examinations in 1929. She had secured the first rank among all candidates from the Dhaka Board. She joined the Bethune College of Kolkata to pursue her bachelor’s degree in Philosophy. It was around that time when the British police tortured her parents and family and her father lost his job, leaving the family’s responsibility on the shoulders of Pritilata Waddedar. She continued to pursue her education but her degree was withheld by the British authorities. Her degree was later awarded posthumously on March 22, 2012, by the University of Calcutta.

After completing her bachelor degree, she returned to Chittagong and became the headmistress of the Nandankaran Aparnacharan School. During her Intermediate at Eden College, Pritilata began taking a keen interest in revolutionary activities and had joined freedom fighter Lila Nag in Dipali Sangha. Bengal in the 1930s had shunned Mahatma Gandhi’s idea of enon-violence’. Revolutionary organisations, espousing armed struggle against the British regime, had gained centre-stage in Bengal.

Pritilata was introduced to Master’da Surya Sen and Nirmal Sen, by one of her revolutionary cousins. It was rare for women in those days to be accepted in revolutionary groups. Pritalata was not only accepted but was trained in fighting and leading attacks. Her inclusion into the Dhalghat camp of Patiya of Jugantar group, run by Surya Sen himself, drew the ire of fellow revolutionary leader Binod Bihari Chowdhury. However, Master’da also met Netaji Subhash Bose.

Although her inclusion was initially meant to deceive the British authorities, Pritilata soon rose to the ranks in the group. During the Chittagong Armoury raid of April 18, 1930, Pritalata was successful in destroying telephone lines, telegraph office. Besides Surya Sen, she was also inspired by revolutionary Ramakrishna Biswas. He was serving prison time in Alipore Central jail of Kolkata for killing rail officer Tarini Mukherjee mistakenly, although his target was the General Inspector of Police (Chittagong) Craig.

Owing to her deception skills, she was able to meet Ramakrishna Biswas in jail about 40 times without raising any suspicion, easily passed off as his elder sister. When Ramakrishna was hanged to death in 1931 by the British, the incident fuelled her revolutionary ideas even more. Freedom fighter Kalpana Dutta shared her experience with Pritilata in her book.

She narrated how Pritilata was reluctant to sacrifice a goat on Durga Puja, thereby making fellow revolutionaries question her ability at armed struggle. “Do you want to fight for the country’s freedom too non-violently or what?” Pritilata was asked. She replied: “When I am ready to give my own life for the country’s freedom, I won’t hesitate a bit in taking somebody’s life too if necessary.” The incident went on to show the resolve and the fire of patriotism that was burning in her heart.

Pritilata had a narrow escape when she went to meet Surya Sen on June 13, 1932. His hideout was surrounded by British troops, leading to a confrontation. Although some revolutionaries were martyred, the duo managed to escape. The British authorities got alerted and they put her up on the list of emost wanted’ revolutionaries. Master’da instructed Pritilata to remain underground for someone while the group hatched other plans. Master’da wanted to target the racist, white supremacist ePahartali European Club’. The notice board outside the club read, “Dogs and Indians not allowed”.

In her book, Kalpana Dutta recounted how the parents of Pritilata were devasted at her loss.

“People of Chittagong have not forgotten Priti or her great sacrifice. They point out her father to any stranger and say, He is the father of the first girl who gave her life for our country’,” she concluded.