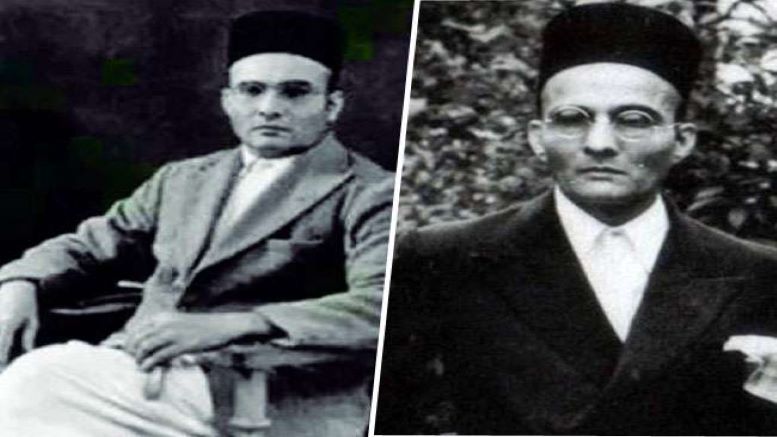 Veer Savarkar was among several leaders who expressed their views after BR Ambedkar’s conversion to Buddhism. Savarkar’s article (Tweet archived here) was published in Kesari’s Diwali Edition on October 30, 1956. In the article, he minces no words and lays bare the underlying Hindudvesh of Ambedkar.

In the very beginning of the article, Savarkar highlights that Ambedkar’s followers had been dropping hints about him embracing Buddhism for 7-8 years before converting. He further said a few lakhs people accepting Buddhist sampradaya leaving Sanatan sampradaya is a matter to ponder about but not worrisome as some people think.

“Even if Dr Ambedkar vows to replace Hindu Dharma with Buddhism, there is no reason to give it great importance. Buddha preached his religion for forty years and Samrat Ashok made massive efforts to promote it but neither succeeded in uprooting Hindu Dharma. When both failed how do we expect Ambedkar to succeed? However, the rift it is likely to cause in the society should be nipped in the bud”, Savarkar writes.

If one were to say that he hadn’t realised it then it shows Dr Ambedkar’s immaturity or at the least exposes his statements as means to distract the masses. Ambedkar reasons that neither Islam nor Christianity have untouchability. Even if one were to accept this argument at face value then it must be pointed out that both religions practised slavery which is worse than untouchability and was supported by the founders of both religions.

Dr Ambedkar was well aware of the flaws of non-Hindu religions. He also knew that many ‘untouchables’ had been converted to Islam and Christianity for several hundred years either forcibly or otherwise. Many from the Mahar community have also been converted even before Ambedkar’s birth. However, even after conversion, they continue to remain ‘untouchables’.

Savarkar cited the example of descendants of those who had converted more than a century ago in Travancore. He says they are kept away not just from residences and schools but even in churches they are made to sit separately in a corner. In Maharashtra too those belonging to various communities who converted to Christianity are considered as ‘untouchables’ even among Christians.

The condition of converted Muslims is no different. The untouchable Muslims had even raised the issue once in the Bengal assembly. Those from these communities who became Sikhs were designated as ‘Majhabi Sikhs’.  Ambedkar was aware of this reality. These and several underlying reasons made Ambedkar not opt to convert to these religions.

Those who know the underlying reasons are also aware that Ambedkar didn’t embrace Christianity or Islam (even though he wanted to) only because he wanted to defame and cause maximum damage to Hindu Dharma and society. However, some innocent Hindus believe that Dr Ambedkar did a favour to Hindu society by not opting for the Abrahamic religions. The plain truth is that he didn’t get an opportunity to become an iconoclast (Kalapahad) else he would have happily become one.

The proof of this lies in the fact that for the past 3-4 years he has been abusing through his writings and speeches what he deems Hindu Dharma and Hindu society under the garb of propagating Buddhism. I’ve been reading articles on Hindu Dharma written by him and his followers. They use degenerate and lowly language for Hindu granthas, Bhagwans, customs, and practices. No society except the tolerant Hindus would accept such language and criticism.

This is the main reason one won’t find Ambedkarites daring to criticise either Islam or Christianity. If Dr Ambedkar had dared to criticise the non-Hindu religions, then his fate would have been the same as that of Kanhaiyalal Munshi. Similarly, while pointing out the flaws of Hindu Dharma, Ambedkar never uttered a word about the vices of Buddhism.

Ambedkarites use 5-10 vows of Buddha, which were mostly propagated by Sanatan Rishi Munis and were only translated into Pali by Buddha, to claim the superiority of Buddhism. They need to tell that Buddhism and its texts also suffer from the same flaws that any other religion in the world does. But Ambedkar has been blinded by Hindudvesh to such an extent that he refuses to see and accept this despite knowing.

Savarkar further questions “if Ambedkar was so fond of Buddhism since his childhood, then why did he want to become a Christian or Muslim when both these religions term Buddha as heathen and kafir? He accepted Buddhism because he had no other choice. Why should Hindus sing praises of such a man?”

For the last 20-25 years, Dr Ambedkar has been repeatedly saying he was born a Hindu because he had no choice but he wouldn’t die as a Hindu. Even after becoming a Buddhist at Nagpur, Hindudveshi Ambedkar reiterated his vow not to die as a Hindu and continued to vilify Hindu Dharma.

He has now been caught in such a situation that unless he converts to some other religion, he must die as a Hindu only because by becoming a Buddhist he has remained within the boundaries of Hindu Dharma. This is so because great Hindu leaders and organizations have defined Hindu as those who accept Bharat as their holy land and fatherland.

Ambedkar and his followers as well as their ancestors belong to Bharat. Similarly, Gautam Buddha’s Janmabhoomi and Karmabhoomi are also Bharat. Therefore, every Buddhist sect has its root in Bharat. Since Ambedkar is a Bharatiya Buddhist, he will always remain within the boundaries of Hindutva.

The only change that has come about by his conversion is that he has left the Vedic fold and accepted avedic panth/sampradaya (one may term it a religion if they want to) called Buddhism. Even Ambedkar is aware of this fact and hence, he forcibly included vows that aren’t a part of traditional Buddhist Deeksha while converting to Buddhism at Nagpur.

Veer Savarkar says just like if a frustrated kid disowns his parents, he won’t cease to be their child, Ambedkar won’t be able to break himself away from Hindutva as long as he is a Bharatiya Buddhist no matter how many times he keeps saying “I am not a Hindu”.

He further highlights that several Hindu reformers including himself and Ambedkar have contributed towards ridding the Hindu society of practices such as untouchability and casteism. The practice is dying and even the constitution has made it illegal and a punishable offence. Savarkar also believed that just as the practice had disappeared from the cities, it would eventually disappear from the entire country.

However, it won’t go away just by converting to Buddhism. Members of Mahar community who attended the Sabha would realise that only words won’t help them get rid of untouchability after they return to their homes. During Buddhist Samrat Harsha’s times, Buddhists designated Chandalas as untouchables. The Chandalas were to reside outside Gaya and make noise using a stick to announce their arrival inside the city as well as move along the corners without coming in contact with anyone.

The Mahars would neither benefit socially nor economically and on the other hand, the community feeling that comes from being Hindu would only be destroyed opines Veer Savarkar. He, therefore, advices them not to fall into the trap of conversion. “Jagjivanram, Tapase, Kajrolkar, and other reformers have denounced Ambedkar’s conversion and it is only through the positive efforts of these reformers that the practice would be totally done away with”, he writes.

He further highlights that somewhere in the corner of his heart, Ambedkar nurtured the desire to create a ‘Buddha Sthan’ if he could garner sufficient number of followers. “At this point of time we would like to warn the Hindu Rashtra not to blindly praise Ambedkar’s conversion. Jinnah was praised as a nationalist Muslim, isn’t it? Even Nehru had dismissed the demand for Pakistan as fantastic nonsense. We cannot allow such foolishness to repeat itself. Hence, we must view conversions such as this that may cause rift in the society with suspicion and oppose it from the very beginning.”, he says in the article.

He cites history where Hindu Rajya was betrayed but ultimately Buddhism was wiped away when Hindu Samrajyas rose. “Even if there is no apparent threat to Hindu Rashtra at present, Hindu society needs to be vigilant regarding the rise of this type of Buddhism that is against Hindu Dharma”, he opines.