President of the All India Majlis-e-Ittehadul Muslimeen, closet Islamist Asaduddin Owaisi sent Twitter rolling with his controversial tweet in defiance of the Supreme Court’s ruling on the Ayodhya Ram Janmabhoomi case. “I want my Masjid back”, he spurted on the micro-blogging site. His mindless bluster was supported by his co-religionist who trended #MasjidsOfIndia. 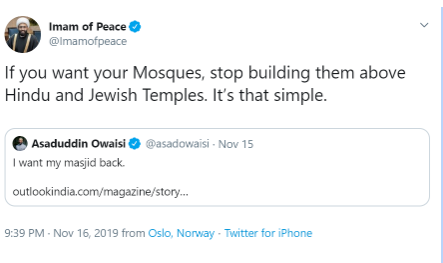 This trend inadvertently unearthed a long, shameful, and blood smeared history of how Islamists tore down sites of worship of other religions and erected their mosques or tombs.

It is a fact universally known that the Kashi Vishwanath Temple is one of the holiest places in Hindu existence. The town itself is one of the oldest cities in the world boasting a documented history of 3500 years; Islam is roughly 1400 years old. It boils one’s blood to know that the original Jyotirlinga of Kashi Vishwanath was destroyed by the Mughals. It is said that the comparatively tolerant Mughal, Akbar, had aided in the rebuilding of the temple, but his grandson, Aurangazeb demolished it once again. On the ruins of it, stands today the building of Gyanvapi Mosque.

The menace of Aurangazeb was not limited to the destruction of Kashi but extended to Krishna Janmabhoomi as well, as the tyrant erected the Shahi Idgah mosque above the Keshava Deo Temple.  However, after a prolonged political dispute, the Krishna temple was again built in 1965 adjacent to the mosque. An ASI installed stone inscription by the temple site reads that the present-day temple was built from the ruins of the original temple of ancient times.

Other major temples to have been targeted included the Rudra Mahalaya temple of Gujrat, built in the 12th century CE. Allauddin Khilji dismantled the temple in 1410 CE and then Ahmed Shah demolished it completely. The western part of it was converted into Jami Masjid.

A temple of Mata Saraswati was built in Dhar district of Madhya Pradesh by Raja Bhoj of the 10th century. It was named Bhojshala and was home to tens of thousands of scholars and students. About 1200 CE, the students were killed by the army of Allauddin Khilji, when they resisted his order to convert to Islam. The Bhojshaa Saraswati temple was attacked and ravaged multiple times by invaders like Dilwar Khan and Mehmudshah, and it stands as the Kamal Moulana Makbara today, where Muslims perform Namaz.

Till 1997, Hindus could do darshan of the temple, but in March 1997, the then MP Chief Minister, Digvijay Singh, prohibited all Hindus from entering the premises and permitted Muslims to offer Namaz at the site every Friday. However, Hindus are now allowed to enter and perform pooja on Vasant Panchami.

The Adina Mosque in Pandua, West Bengal was built by Sikander Shah and is believed to be built over a Hindu temple dedicated to Bhagwan Shiva. In fact, the establishment still manifests multiple Hindu architectural carvings and designs. A stone engraving depicts Sri Ganesha, while the other features a Nataraj on it.  The very name Adina of the mosque, as legend has it, comes from “Adinath”, that is, Bhagwan Shiva.

The famous Jama Masjid of Ahmedabad was once a Bhadrakali Temple, built by the Parmar kings of Malwa. Carvings of lotus and other creepers, coiled serpents representing the Kundalini, bells and celestial dancers on the 100 surviving pillars are testimony of it being a Hindu temple before being converted into a mosque. Had it been a mosque, why such pillars instead of an extended hall?

About 60 kilometers from the capital city of Madhya Pradesh sits the Bijamandal Masjid, another witness of the plunder and robbery of the Muslim rulers who demolished temples and built masjids from their rubble. The erstwhile temple built by Paramar kings was dedicated to Mata Charchika, and one of the pillars still bear’s the inscription of deity Vijaya. The etymology of the very word ‘Bija’ of Bijamandal masjid traces back to ‘Vajaya’.

The list of Hindu temples destroyed during Islamic reign in Bharat is endless, but these were not the only sites destroyed by Islamists. Through centuries of Islamic caliphates, innumerable Christian churches, Jewish synagogues and Zoroastrian fire temples have either been torn down or forcefully turned into masjids. The count of Orthodox Churches turned into Masjids is so large that the Byzantine-style of Orthodox architecture is now recognized as the typical Islamic mosque construction.

Hagia Sophia was a Greek Church which was converted into the Ottoman Imperial Mosque after Constantinople was attacked and defeated by Ottoman forces, and the troops of Sultan Mehmet carried out unbridled loot in the city for three days. The Wailing Wall of Israel is another illustration of Islamist invaders establishing their domination over other religious populations.