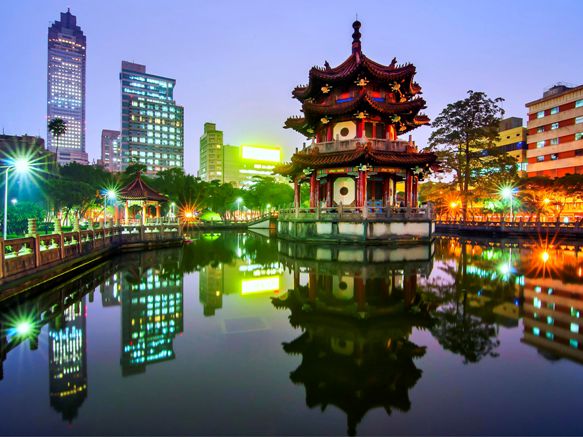 In the period between the 1630s and 1640s, the Dutch launched several campaigns to gain control of Taiwan. They controlled Taiwan until 1661 when a Chinese-Japanese sea lord called Koxinga drove them off. Under Koxinga’s rule and that of his heirs until 1683, Chinese settlements continued to spread in Taiwan. His heirs were defeated by the Manchu Quing dynasty in 1683 and Taiwan remained a part of the Chinese empire until 1895 when it was ceded to Japan.

The Chinese Nationalist Party or Kuomintang took control of Taiwan in 1945. Current day Taiwan is composed of 95% of Han Chinese while aborigines or original inhabitants of Taiwan have dwindled, per one estimate, to just 400,000.

With a majority of Chinese Han people, the major belief system of Taiwan includes Confucianism, Buddhism, and Taoism.

One book describes religion in Taiwan as ‘Taiwanese religious experience begins with ancestor homage, is cultivated by Confucianism, coloured by Taoism, and modified by Buddhism. That is to say, religion in Taiwan is complex and multi-layered.’

Similarities with Japan and South Korea

While Japan was the first of the Asian countries to become a global power in the 19th century,  Taiwan, like South Korea is another East Asian country that rapidly transformed in a span of five or six decades in the 20th century from a less developed country to a developed one, although there have been some road blocks in recent years.

Early land reform appears to be a common foundational factor that contributed to development in all three countries as does the emphasis on education.

Like South Korea, Taiwan too faced colonization by Japan under which an reasonable infrastructure had been created. Just like South Korea, multiple factors seem to have contributed to achieving success and making Taiwan one of the four Asian tigers along with Hong Kong, Singapore, and South Korea. Some of these include industrial planning by the government and bringing in a free market economy.

Land Reforms: Like South Korea, Taiwan’s government too carried out land reforms. For transferring land to the actual tillers, the landlords were given stocks in state-owned enterprises. Agricultural productivity increased and labour gradually freed from agriculture could be used for industrialization.

Education: Taiwan started off with free and compulsory education as early as 1950. Thus all children received minimum basic school education for at least six years. Subsequently, the free and compulsory education was extended to a nine-year duration for all children in 1968 despite uncertainty about affordability of the same. High enrolment rates even among girls at the very start in the 1950s indicate that this was one important factor in Taiwan’s rapid rise.

Infrastructure: Due to Japanese colonization, the infrastructure in the form of ports, roads, railroads, bridges, dams, electrification, public health, education and banking that Taiwan inherited was far superior to that of many other LDCs (Least Developed Countries). While Taiwanese resent Japan’s attempts at forced assimilation and their military occupation, they credit the occupiers for adopting a ‘flexible policy’ and for development of Taiwan’s economy. Albeit this was done to create Taiwan as a profitable base for Japan and with Japanese aspirations to incorporate Taiwan permanently into the Japanese empire, a shared Asian cultural heritage did make it easier for one to “accept” another. This stands in stark contrast to the brutal, exploitative colonial rule of European powers like Britain and France in Asian countries like Bharat, Vietnam etc.

After independence from Japan, Taiwan’s own government, in the 1950s and 1960s, worked to supplement and strengthen existing infrastructure using voluntary services of its soldiers by building roads and highways. In later years, telecom and logistics related infrastructure was emphasized.

Planned industrialization by the government: Starting out with import substitution, the government then began to promote exports in the 1960s and 1970s. During the import substitution phase, exchange rate manipulation and tariffs were used to protect domestic manufacturers. Export promotion involved setting up special zones for export oriented industries and providing special incentives to them.

High Savings and Investment: Rooted in the culture of Taiwanese is the high saving rate. This is said to have been one factor that helped in its development. Even at the beginning of its independent rule in the 1950s and 60s, savings were said to be high at around 30% to 40%.

All the above factors contributed to Taiwan’s growth trajectory. In 1945, due to many disadvantages like an unfavourable land-to-population ratio, poor natural resources and lack of capital, Taiwan was not expected to do well but it defied the low expectations and attained miracle growth.

When the Chinese Nationalist Party (CNP) set up the Republic of China with Taipei as the capital in 1945, Taiwan’s GDP was comparable to that of Congo and hyperinflation was another problem. CNP had brought in some gold reserves and human capital. Reform policies initially focused on stabilizing Taiwan’s currency and controlling hyperinflation.

Land reforms were next and helped increase agricultural output. Enhancing education and bringing in industrialization was the next move. Import substitution quickly gave way for export promotion policies. Aid from the US was used to subsidize industries leading to export growth.

Taiwan started out with labour intensive industries in the 1960s and was a major exporter of shoes, toys, and umbrellas. From 1966, special Export Promotion Zones were established. In the 1970s, Taiwan improved infrastructure, increased electricity production, and began to also nurture heavy industries such as petrochemicals and steel. In 1980, the Hsinchu Science Park was set up to promote high-tech industries. The 1980s also witnessed institutional reforms in the form of trade liberalization and financial deregulation.

The government policy to move to capital-intensive and knowledge-based industries paid off and by the mid 1980s Taiwan became one of the largest producers of computers and computer peripherals. Unlike Japan and South Korea, Taiwan’s economy relies on small and medium sized companies hence information and communication technology (ICT) products have primary importance in its economy rather than ship building and steel industries.

With the opening up of special economic zones in the 1980s by China, companies began to relocate supply chains to China and elsewhere, thus causing GDP growth of Taiwan to drop. ‘Taiwan’s focus on family-sized businesses and inability to produce global brands, such as South Korea’s chaebol Samsung and LG Electronics, stunted its competitiveness.’

Exclusion from many free-trade agreements decreased exports further. Thus, despite an educated work force, wage rates remained stagnant. Taiwan has been seeing periods of slowdown such as in the 1990s and been affected by the 1997 Asian financial crisis. It faced a recession in 2001 and also suffered the impact of the 2008 global recession after which recovery was slow.

By the 1970s, an assertive middle class had come up in the country owing to economic progress and this class demanded more freedoms. The enforcement of martial law was slowly relaxed after the death of Chiang Kai-shek in 1975.

In 1986, the Democratic Progressive Party, the first major opposition party was formed and a year later, President Chiang Ching-Kuo proclaimed the lifting of the martial law. After his death in 1988, Lee Teng-hui became the President.

‘In 1996, Lee Teng-hui became the first directly elected president of Taiwan with 54% of the vote, beating three other candidates in a poll in which 95% of eligible voters took part. ‘

‘Lee’s election was regarded by many as the beginning of a democratic Taiwan. Since then, it has held six elections and elected presidents from both the Nationalist party, or Kuomintang (KMT), and the Democratic Progressive Party.’

Although the pace of development has fallen after 2000, Taiwan’s story can still be considered remarkable. From the 1940s, when its GDP was comparable to that of Congo, to a GDP growth rate that often surpassed 10% for many years until the 1990s, Taiwan managed to achieve the ‘Taiwan Miracle’.  In the decade of the 1990s, it had an average GDP growth rate of 6.6%.

Also, similar to how the Korean and Japanese growth stories unfolded, Taiwan started out with an authoritarian regime and lived under military rule for decades, but transitioned to a full democracy after an increasingly prosperous middle-class asserted its demands for freedom.

Developments that have far reaching impact in Kashmir