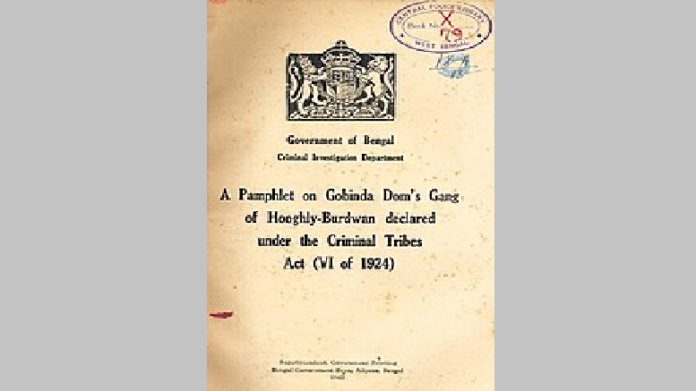 The British come up with the Criminal Tribes Act (CTA) in 1871. It was one of the most draconian acts ever that classified entire communities as “criminal”, created ghettos, stigmatized them permanently.

The CTA has been one of the most atrocious colonial legislation, on par with how the aborigines in Australia were pushed off into enclaves, or the native American Indian children forcibly resettled in Christian schools in Canada.

As per the CTA, certain ethnic communities in Bharat were identified as “addicted to systematic commission of non bailable offences”, they were resettled forcibly, their movements were restricted.

Basically if you belonged to the community that was branded as “criminal” by the Act, that effectively meant you could not step out of our settlement, you would have your move monitored, and if you were adult male, you had to report every week to the local police.

The CTA was first applied in North Bharat, 1871, later extended to the Bengal Presidency in 1876, and finally in 1911 to the Madras Presidency, and the final CTA act in 1924.

When Bharat became independent in 1947, 13 million people in 127 communities, were classified as “criminal” that effectively meant they could be arrested if found outside of their settlement or prescribed area.

Though the draconian act was repealed in 1949, however, the past legacy continues to affect the majority of these tribes, as they are still stereotyped by the cops and Govt authorities.

The genesis of the CTA lies in the 1857 Revolt, where many tribal chieftains like Dhan Singh Gurjar, Avantibhai Lodhi fought against the British, as well as the tribal revolts that broke out in Bihar, Jharkhand, Chattisgarh.

Most of the tribes targeted under CTA, were petty traders, small peasants, gypsies, hill and forest dwelling communities, basically nomadic, lower castes who did not exactly fit into the British notion of “civilized”.

This thinking was more out of 19th century European mindset, that those who led a nomadic lifestyle, did not settle down at one place for farming, nor work for wages, were a danger to society, who had to be controlled.

It was this mindset that led to the Reformatory schools in the West, where children from such nomadic communities or communities like Aborigines in Australia or the native American Indians in Canada, US were forcibly separated from their parents and resettled.

People from time immemorial have been pursuing the caste system defined job-positions: weaving, carpentry and such were hereditary jobs. So there must have been hereditary criminals also who pursued their forefathers’ profession.- Stephen Fry, in 1871 when the Bill was enacted.

“When we speak of professional criminals, we mean a tribe whose ancestors were criminals from time immemorial, who are themselves destined by the usage of caste to commit crime, and whose descendants will be offenders”- James Fitzjames Stephen

This again was a typical British social engineering, by which certain communities were classified as martial,some as agricultural. They actually got support from the media, who saw it as a social reform method.

Entire communities were notified as “criminal”, which anyone born in them was deemed as a criminal by birth. Police got sweeping powers to arrest anyone belonging to these communities, who had no recourse to even counter this legally.

Basically these notified tribes could not even appeal in the judiciary, their movements were monitored, they had to travel with passes that specified where they could go, and magistrates had to maintain records of all such people.

By 1883, it was proposed to expand this act all over Bharat, and 1897 saw an amendment to this Act, by which local Govts could set up reformatory schools for kids between 8-14, much like what they did to the Aborgines in Australia or the native American Indians in Canada, US.

Special settlements were constructed in 1908 for the notified tribes, more like open prison camps, where they had to perform hard labor. All members were fingerprinted, and these settlements had police to monitor them.

The police in turn ensured that no registered member of that community was absent without their notice, on top of it, imposing punishment on such settlements was quite a common practice.

One of the early settlements was that of Aziz Nagar in South Arcot dt, in 1913 that had members of the g Vempur Parayars and Piramalai Kallar community resettled there. Another one was Stuartpuram in Andhra Pradesh, where Yerukulas were resettled.

Though initially it was the Gujjar, Lodhi communities placed under CTA, the act began to be extended to any community,whom the British deemed too rebellious, that included Chamars, Doms, Pasi, Dasads,Rajwars, Boyas.

By 1937, in the Madras Presidency alone, there were 237 such communities classified as “criminal” and notified. This is what led Pasumpon Thevar to lead the protest against the draconian Act.

Apart from communities, even transgenders too were targeted under the CTA, with many of them being put under surveillance on the suspicion of indulging in criminal activities.

When Bharat became independent in 1947, the Govt set up a comittee with Morarji Desai, Gulzarilal Nanda and B.G.Kher to look into the draconian act, and by 1949 it was finally scrapped.

CTA was first repealed in Madras Province thanks to the efforts of leaders like Pasumpon Thevar, Ramamurthy and Jeevanandham, who led continous protests against it. A rather watered down version called Habitual Offenders Act was enacted later in 1952.

However even after the CTA was repealed, the communities classified under it suffered considerable social stigma, the police looked at them with suspicion, arresting on the flimsiest pretext.

The CTA has to be one of the worst atrocities by the British, where entire communities were arbitrarily classified as criminal, pushed into settlements, and livelihood snatched away.

The communities were not allowed to practice their traditional occupations, their children forcibly taken away from there, entire generations stigmatized. It was a terrible, terrible atrocity, whatever way you see it.

The Criminal Tribes Act was one of the worst colonial atrocities ever, on par with what was done wth the Aborigines in Australia or the native American Indians in US, Canada. And thanks for following this rather longish thread on mine on this.

On a side note, my article on Ragala Venkata Rahul, who belonged to Stuartpuram, one of those settlement colonies, and how he braved all odds to represent Bharat in weightlifting, and even win medals.

(This article has been compiled from the tweet thread of @SadaaShree)