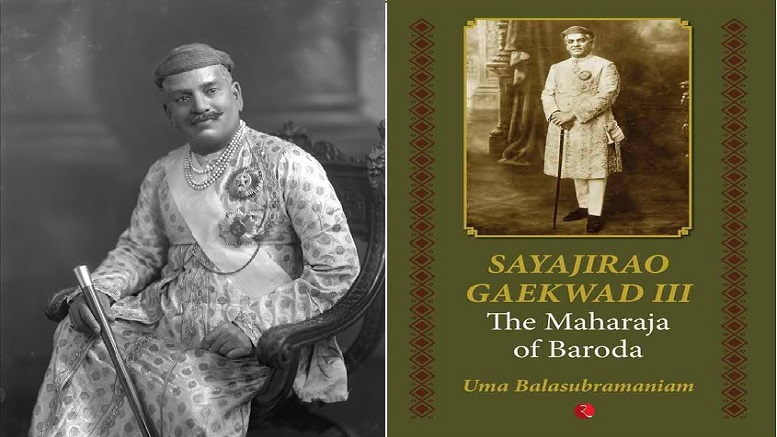 He was born in the family of a farmer who, though he bore the name Gaekwad, was considered to be to the cadet branch of the Baroda royal family or that of the younger sons of a previous ruler and thus not eligible to succeed to the throne. It was fate that decided his ascendancy as Maharaja Sayajirao Gaekwad III (1875-1939) and his reign of over 60 years is today remembered for an illustrious university that bears his name and a host of reforms in various spheres, including the economy, women’s education, encouraging widow remarriage, abolition of child marriages and the purdah — rather than creating edifices.

“His reign can be summed up in one word simply splendid,” author Uma Balasubramaniam, who has penned his biography, “Sayajirao Gaekwad III: The Maharaja of Baroda” (Rupa), told IANS in an interview.

“His reforms with regard to educations for women which manifested in his opening a number of schools, colleges, and even teachers training colleges for them, apart from encouraging widow remarriage and abolition of child marriages and the purdah system clearly indicates his role in the empowerment of women,” Balasubramaniam added.

“Sayajirao governed the state with remarkable zeal and had many firsts to his credit. As early as 1881, he opened several schools for girls and a training college for lady teachers. In 1893, he introduced free primary education for children and became the first Indian ruler to do so. He banned child marriage and untouchability and widely promoted inter-caste marriage and widow remarriage,” said Balasubramaniam, the grand-daughter-in-law of the late C.Rajam, a pioneer industrialist and educationalist of Madras.

The Baroda College that he founded has blossomed into the world-renowned MS University, while his rich library became the nucleus of today’s Central Library of Baroda with a network of libraries in all the towns and villages in his state.

“Right from its incipience, (Baroda College) adopted the American system of education by following the tutorial system. Stress was laid on research by which a student understood his subject thoroughly rather than cramming notes for passing exams,” the author pointed out.

Balasubramaniam, in fact, is herself an alumnus of the MS University’s Faculty of Arts, from where she graduated in history.

Apart from his educational and social reforms, Sayajirao played a key role in the development of Baroda’s textile industry, while his other economic initiatives included the establishment of a railroad, waterworks that still feed the city of Vadodara and the founding in 1908 of the Bank of Baroda, today one of Bharat’s leading public sector banks into which two other nationalised banks have been subsumed.

The fact that his true identity lay in being a farmer’s son was never obscured by the grandeur of the palace and the immense riches of the Gaekwads, the book states, adding that he was perpetually worried about the hardships that villagers faced in times of adversity in the villages of Gujarat, the author writes.

“The chief among these adverse factors were the scarcity of water and the lack of education of the villagers, which acted as impediments to raise their standards of living. These two main factors drove him relentlessly to secure both, not only for the villagers but also for the people of Baroda. He was also aware that many of the problems arose from the social taboos and superstitions that governed the actions of the people and set about to remove these prejudices through reforms. He achieved all this in spite of the hostile environment created by priggish British aristocrats and also by those who ran the machinery of the British government in India,” the author adds.

“The research involved visiting libraries for books with information on the history of the royal family. Hours were spent in the Gujarat government archives and also involved months of study in the India Office records in London. For the personal touch in the story, conversations with those people in Baroda whose ancestors had been part of the Baroda administration during the reign of Maharaja Sayajirao Gaekwad-III was very informative,” she said.

On the more contemporary level, Sayajirao’s grandson, Fatehsinghrao Gaekwad, an attacking right-handed batsman, represented Baroda in the Ranji Trophy between 1946 and 1958 and had the highest score of 99 in his first season. The President of the Board of Control for Cricket in India (BCCI) from 1963-66, he was also an honorary life member of the MCC.

Maharaja Sayajirao Gaekwad III was also a supporter of the Arya Samaj who asked the organization to carry out educational and other work amongst underprivileged classes in his kingdom. The King appointed Sri Aurobindo as Vice-Principal of the college as well as his personal secretary. There is also reason to believe that he was a covert supporter of Hindu revolutionary freedom fighters and was viewed with suspicion by the British because of this. Under his rule, a young Bhimrao Ambedkar was supported by the Baroda State Scholarship of £11.50 per month for three years, for his post-graduation in Columbia University.

Such forgotten vignettes, totally white-washed from the history taught in our schools, show that social reform and a thirst for knowledge is integral to Hindu society. Whenever corruptions have arisen in our society, they have been challenged by those with deep rooting in and appreciation of Hindu Dharma,  who understand that the path to divine consciousness and self-realization is open to all humans.

It is time that the myth that we should be thankful to our rapacious colonisers, and that their actions were somehow driven by a need to ‘educate, reforming and civilise’ us, is laid to rest.