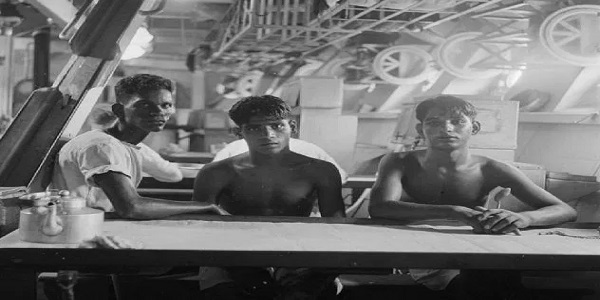 In March, 1976, P.V.Chakraborty,  former Chief Justice of Kolkata HC  wrote a letter, where he described a correspondence between him and the British Prime Minister Clement Atlee in 1956. Atlee, often mocked by Churchill as a “Modest man, with much to be modest about”, was visiting Bharat in 1956, after it became independent.

During his visit, met Chakraborty, who was the then-acting Governor of West Bengal, and was asked  “The Quit India Movement of Gandhi practically died out long before 1947 and there was nothing in the Bharatiya situation at that time, which made it necessary for the British to leave Bharat in a hurry. Why then did they do so?”

Atlee gave out several reasons, one was Netaji Subash Chandra Bose’s Indian National Army, which weakened their army, and the other was the Royal Indian Navy Mutiny. And when Chakraborty asked him about impact of Gandhiji’s 1942 Quit India movement, Atlee wryly remarked with a smile “Minimal”.

Royal Naval Ratings Mutiny, or what is often called the forgotten mutiny in Bharat’s history, an event which unlike the 1857 mutiny or the Quit India movement, does not really strike much resonance, except among hard core historians. Or Leftists, since they were the only ones to have backed this whole heartedly.

Like the 1857 Mutiny, the 1946 Royal Naval ratings mutiny had a rather mundane beginning.  It was not an overnight event however, the resentment was building up among the naval ratings, and other Bharatiya members of the Army. The INA was the most serious of all that really shook the faith of the British. Not that well known is something called the Royal Air Force Mutiny that also took place in 1946, over the working conditions, and demobilization of British troops after the end of the war.

The beginnings of the Naval Ratings Mutiny were in an event that occurred on Jan 16, 1946, when a contingent of Naval ratings arrived at the Castle Barracks in Mint Road of Mumbai’s Fort Area. This contingent was from the training ship HMIS Akbar, that was at Thane, and it was around evening 4 PM. On being informed of the arrival of the contingent, the galley cook, took out 20 loaves of bread, casually added some water to the mutton curry as well as the dal, that was from the previous day and served it. The food was so tasteless and substandard that only 17 of the ratings took it, the rest of them went ashore.

This was not a one off incident, such neglect was quite common, and what was even worse, repeated complaints to senior officers of the working conditions, did not elicit any response.  As the complaints became galore, the ratings were more and more frustrated, both with the conditions as well with the indifference of the higher ups.

Adding fuel to the fire was the trial of the INA leaders, Netaji Subash Chandra Bose fight for freedom and the exploits of INA during Siege of Imphal began to be fed to the ratings. It gave them a sort of inspiration and hope that the mighty British empire was not that invincible.

On Feb 18, 1946, Naval Rating M.S.Khan led the revolt on HMS Talwar, and a strike committee was formed.  In Karachi, ratings began the revolt on HMIS Hindustan, anchored off the Manora Island. M.S.Khan and another naval rating Madan Singh, had by now taken control of the mutiny, and it began to spread.

By Feb 19,  ratings from Castle and Fort Barracks had joined the revolt. Ratings left their posts, and began to go around in Bombay on trucks carrying pictures of Netaji Subash Chandra Bose, who by now had become their inspiration.

And soon it spread to Kochi, Vizag, Kolkata. Officers who opposed the strike were thrown off ships, and the mutineers used radio sets to communicate among themselves.

HMIS Talwar became the epicenter for the mutiny as the strikers used the radio sets to send messages to and fro between themselves. It was a perfectly coordinated revolt, that was now striking back. And soon the other workers in the Navy too joined,  from the sloops, the minesweepers and the offshore establishments in Mumbai, along Hornby Road, near CST, now the Dadabhai Naoroji Road.

The White Ensign of the British was lowered from all the ships, and British officers were singled out for attack by mutineers, using hockey sticks, crowbars and whatever else they could lay their hands on.

Flora Fountain soon reverberated with cries of Jai Hind,  and slogans of liberation. British officers and their wives were forced to shout Jai Hind by the protestors. The Taj Mahal Hotel, Yatch club all had guns trained on them throughout the day.

The Royal Indian Air Force joined in solidarity with the striking ratings, and 1000 men from Andheri, Marine Drive camps came in. The Gurkhas in Karachi,  one of the sword arms of the British army, refused to fire on the mutineers.  The mutiny now began to spread like wildfire, Kolkata, Vizag, Chennai, Karachi, reverberated with slogans of “Strike for Bombay”, “Release 11,000 INA prisoners” and “Jai Hind“.

The tricolor was now flying on all the ships, and by Feb 20, British destroyers positioned themselves near the Gateway of India. The British Government, now headed by Clement Atleee, was alarmed, orders were given to the Royal Navy to put down the revolt.  Admiral J.H.Godfrey, the Flag Officer in command of the Royal Indian Navy, gave an ultimatum to the mutineers to submit or perish.

On the other side, a wave of patriotic fervor surged ahead in support of the mutineers. The mutineers had taken control of all the ships and were prepared for a last ditch stand from the clerks to the cleaning hands to cooks and wireless operators, every single Bharatiya was ready for the battle.

On Day 3, the Royal Air Force flew a squadron of bombers near Mumbai harbor, while Admiral Arthur Rullion, issued an ultimatum, asking the mutineers to surrender unconditionally. In the meantime, the 2nd Battalion of the Black Watch, silently managed to secure the island of Manora, near Karachi.

Soon the decision was made to engage HMIS Hindustan in a straight confrontation, which was now under the control of the mutineers. The ultimatum was given by the Royal Artillery on Manora island,  to either surrender or be prepared for war.

With increasing bombardment and not much hope in winning a long drawn war, the mutineers began to surrender, and on Day 4, negotiations took place, where most of the strikers demands were conceded in principle.

Immediate steps were taken to improve the quality of the food, and living conditions, and assurance was given that release of INA prisoners would be considered favorably. 7 RIN sailors and 1 officer was killed, while around 34 were injured and 476 discharged from duty.

Sadly, the mutineers got no support at all from the Indian National Congress as usual, in fact they were even condemned for their actions.

Mahatma Gandhi issued a statement condemning the mutineers for revolting without any guidance from a political party.

One of the lone voices in the Congress who supported the mutineers was Aruna Asaf Ali, who said she would rather unite Hindus and Muslims on the barricades.

The Muslim League too denounced the mutineers, arguing that unrest on the streets was not the best way to deal with grievances and it should be through constitutional methods only.

One reason could be that spontaneous uprisings like these threatened the centralized political authority of both Congress and Muslim League, and affected the dealings with the British Government. One more reason was that neither Congress nor Muslim League was genuinely a mass based party, they still remained a preserve of the upper class, upper caste, elite, and these kind of mass upsurges left them uncomfortable.

The only political party that supported the mutineers was the Communist Party of India then, all others just left them in the lurch. Both Sardar Patel and Md. Ali Jinnah were united in their condemnation of the mutineers actions, and Aruna Asaf Ali was the lone voice from Congress in support of them. The mutineers faced court martial and imprisonment on surrender, and what was worse even after independence, they received no support from either the Governments of Bharat or Pakistan.

The Royal Naval Ratings Mutiny lasted only for 4 days and was put down swiftly, however the impact went much beyond. The British were now fully convinced, that they could no longer trust the Armed forces to maintain their control over Bharat. So far the British managed to hold on to Bharat through the Armed forces, but when they began to revolt, they knew their time was up.

First the INA revolts and then the Naval Ratings mutiny, add to it the revolts in the Air Force too, plus the fact that Britain was effectively pauperized after World War II,  all influenced their decision to quit Bharat, much more than that 1942 movement.