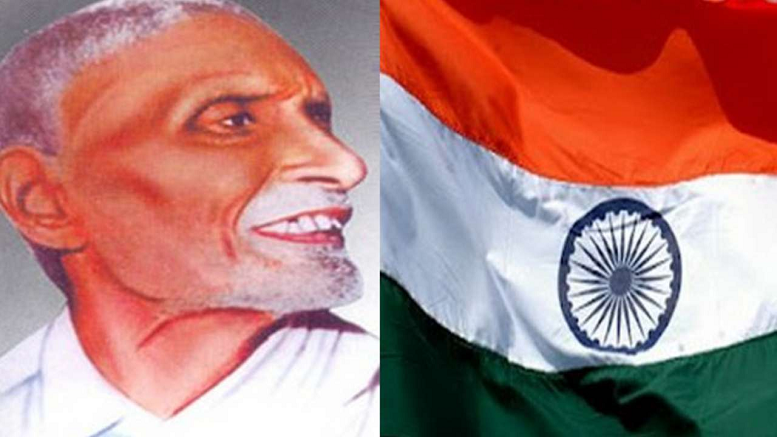 Pingali Venkayya (2 August 1876 – 4 July 1963) was a freedom fighter. He was born in Telugu brahmin  family at Bhatlapenumarru, near Machilipatnam, in the state of Andhra Pradesh. His father’s name was Hanumanta Raidu, and his mother’s name was Venkatratanama. He was married to Rukminamma and they had two sons and one daughter.

He completed his high school studies from Madras (now called Chennai) and went to Colombo in Ceylon for studying Senior Cambridge after passing his high school. As a student, he grew to be a polymath; he had a particular interest in geology, education, agriculture and languages and went on to become a good geologist, agricultural researcher and a multi linguist.

At the age of 19, Venkayya joined the British Indian Army and he participated in the Boer War (1899-1902) in South Africa. This is where he met Gandhi.

While serving in the British Army in South Africa, an incident left a mark on Venkayya’s mind. The soldiers were asked to salute the Union Jack, the British National Flag. This made a strong impact on Pingali Venkayya and he felt the need for our country to have a separate flag. This incident, and Gandhi’s fight for Bharat’s independence turned Pingali Venkayya into a freedom fighter.

After returning from South Africa, he worked as a railway guard at Bangalore and Madras. Thereafter worked as a plague officer at Bellary. Later he moved to Lahore to join the Anglo-Vedic college to study Sanskrit, Urdu and Japanese.

He was also known as Patti Venkayya because of his research into the Cambodia Cotton. Patti means ‘cotton’ in Telugu, which was very important for Machilipatnam, a former port city that became famous for its Kalamkari handloom weaves.

In 1910 Pingali Venkayya came to Nnadigudem (currently in Telangana) on the request of Zamindar Nayani Venkata Ranga Rao (Raja of Munagala) to promote cotton cultivation in Munagala Paragana as the crop was newly introduced in that area. For his contribution in the field of agriculture The Royal Agricultural Society of England conferred on him an honorary membership.

He joined as lecturer in Andhra National College Machilipatnam and worked there during 1911-1944. He caught the attention of the people with his love for languages. In 1913, he delivered a full-length lecture in Japanese, at a school in Bapatla, a town in Andhra Pradesh. He became instantly famous as ‘Japan Venkayya’.

From Madras Presidency college he obtained diploma in geology and he also wrote a book in Telugu on geology. He did lot of research during 1924-1944 on the Mica (a silicate mineral) and also wrote a book on how coal is converted into diamond. He was also called ‘Diamond Venkayya‘ for his efforts in this field of Gemmology.

He was keen to have a national flag for our country and after returning to Bharat, he devoted his time to designing flags that could bind the entire nation as one, and be adopted as the National Flag of our country.

In 1916, he published a booklet on flags. The booklet was titled ‘A National Flag for India.’ It contained twenty-four designs of flags. Later, when he met Gandhi in Vijayawada, he showed him the booklet. Gandhi was pleased to see the design and acknowledged the need for a national flag and he asked Pingali Venkayya to design a fresh one at the National Congress Meeting, held in 1921 at Bezawada (now known as Vijayawada). This incident made Pingali Venkayya very popular and people started calling him ‘Jhanda (flag) Venkayya‘.

Evolution of our national flag

Pingali Venkayya’s initial design of the flag was made up of two red and green bands to indicate Hindus and Muslims, respectively – the two major religions in the country. The flag was called the Swaraj flag. Gandhiji made some changes to the design by adding a white band to signify peace and a charkha to denote self-reliance.

Later, the Congress committee in 1931 changed the red band to saffron. It also repositioned the bands, with saffron being put on top, followed by white and then by green. The charkha was placed in the middle of the flag on the white band. At the 1931 meeting, the Swaraj flag became the official flag of Congress, and it also became the symbol of the independence movement.

On June 23 1947, the Constituent Assembly set up a committee headed by Dr. Rajendra Prasad to select a flag for independent India. On July 14 1947, the committee suggested that the flag of the Indian National Congress be accepted as the National Flag of Bharat with certain modifications so that the flag is acceptable to all parties and communities.

The spinning wheel of the flag was replaced by the chakra (a 24-spoke wheel in navy blue, resting at its centre) from the Lion Capital of Ashoka. The new flag was proposed by Jawaharlal Nehru at the Constituent Assembly on July 22 1947, with deep saffron, white and dark green in equal ratios and the Ashoka wheel in blue in the centre.

The Constituent Assembly approved the resolution unanimously. It started to serve as the national flag of Bharat from August 15 1947, to January 26, 1950 and has served as the flag of the Republic of India thereafter. The tricolour pattern in our Flag is intended to uphold the three pillars of Bharat’s democracy- saffron symbolising strength, courage and sacrifice, white indicating peace and truth (Dharma Chakra- progress), and green symbolising growth, fertility, and auspiciousness.

Pingali Venkayya passed away in a state of poverty on July 4 1963. According to his will, his last wish was to be covered in the tricolour national flag that he had designed. He dedicated his whole life to the country and worked relentlessly to make Bharat a free country. His daughter G. Seetha Mahalakshmi, who turned 100 years in December, 2021 passed away on 21 st July, 2022.

In 2015, Mr. M. Venkaiah Naidu, the then Urban Development Minister, renamed the AIR Vijayawada after Pingali Venkayya and unveiled his statue on its premises. On August 3 2022, Mr. Amit Shah, the Union Home Minister, released the commemorative postal stamp in honour of Pingali Venkayya during the Tiranga Utsav event.

Let us hope the Union Government will consider Pingali Venkayya’s name for awarding Bharat Ratna, which will be a befitting tribute to him when we are celebrating Aazadi Ka Amrit Mahotsav, commemorating 75 years of our independence.