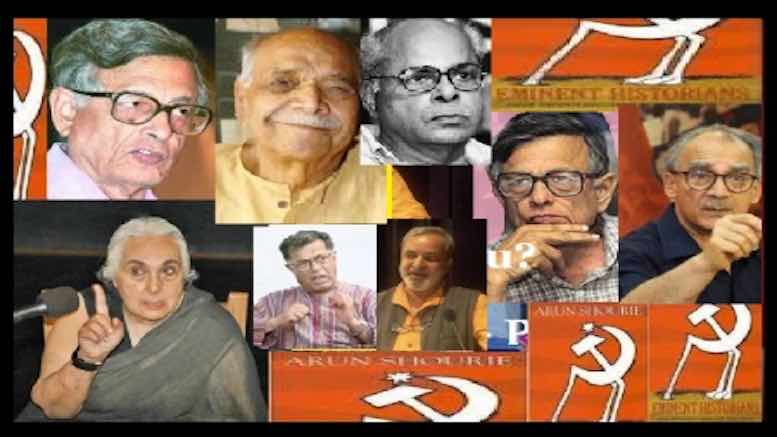 “This is an old charge which keeps surfacing now and then,” wrote one of those “eminent historians”, K. N. Panikkar, in an vituperative response to an article of mine — the charge that close to two crores had been spent on the “Towards Freedom” project of the Indian Council of Historical Project, and little had been achieved.

“About a year back Times of India carried a front page story on this. The historians had then clarified through a public statement published in several newspapers, that they have not drawn any money from the ICHR and that they worked for five years purely in an honorary capacity. When he [that is, me] gets the information from the ministry, if he does, that the editors have not taken any money, I would normally expect Shourie to tender a public apology. But given the intellectual honesty and cultural level reflected in his article, I do not think it would be forthcoming. The alternative of suing for defamation the likes of Shourie is below one’s dignity. But I do expect at least the ministry to make a public statement on the factual position.”

Strong stuff, and definitive, one would think. It turns out that on 17 July, 1998, in answer to a question tabled in the Rajya Sabha, the Ministry stated that only one part of the project has been completed and published since the original volume of Dr. P. N. Chopra. This is the volume — in three parts — by Dr. Partha Sarthi Gupta covering 1943-44. In answer to another question, the Ministry has reported that “After publication of the Volume he was paid an honorarium of Rs. 25,000 in September, 1997.”

Dr. Partha Sarthi Gupta, in other words, is the one editor who has completed the work which he had undertaken. For that he has been paid Rs. 25,000. The others have not completed the work they had undertaken, they have therefore not been paid the Rs. 25,000 which are to be paid to them only when their volumes are completed and published. That is how they go about proclaiming themselves to be social workers — we have been working in an honorary capacity, we have not taken a penny !

And as bits and pieces about the ICHR at last start trickling out, we learn that the “Towards Freedom” project isn’t the only one on which large amounts have been spent and which has not been completed. There is an “Economic History of India Project.” Rs. 1,955,000 have been spent on it. Nothing has been published as a result. Though, the Ministry told the Rajya Sabha that “according to the information furnished by the ICHR,” two volumes of the project — on Railways and Agriculture — are “ready for the press”.

The Ministry also told the Rajya Sabha that “Professor Bipin Chandra was sanctioned a sum of Rs. 75,000 during 1987-88 for the assignment entitled ‘A History of the Indian National Congress’. A sum of Rs. 57,500 has been released to him till 23-6-1989. The remaining balance of Rs. 17,500 is yet to be released because a formal manuscript in this regard is yet to be received.”

In a word, spare readers this social-worker stance — “doing all this in a strictly honorary capacity”. It is as if Bipin Chandra were to go about saying, “See, I have not even taken the Rs. 17,500 which the ICHR still owes me.” And do not miss that effort from the ICHR to help to the extent possible — “The remaining balance of Rs. 17,500 is yet to be released because a formal manuscript in this regard is yet to be received.”

As newspapers and magazines such as Outlook had done, Panikkar had concocted his conspiracy theory on the charge that the BJP Government had changed the word “Rational” into “National”, and that it had suppressed three of the five objectives of the ICHR by changing the Memorandum of Association of the ICHR.

And what was the response of this “eminent” historian who, as he said, writes signed articles in publications of the Communist Party “because I believe in the ideals it stands for”? “Even if Shourie’s contention is true (unlike Shourie who is a BJP MP, a resident of Delhi elected from UP, I have no means to ascertain from the Ministry)…”

That is a much favoured stance: when caught peddling a lie, insinuate that the other fellow is privileged! And that as you are from the working masses, you cannot ascertain whether the facts he has stated are true. Therefore, what you stated must stand as fact — Q.E.D. !

Exactly the same dodge was used a day or so later by another of these progressives. Manoj Raghuvanshi had invited K. M. Shrimali and me to discuss on Zee Television’s Aap ki Adalat the charge that history was being rewritten in communal colours.

Raghuvanshi read out what Outlook had reported — that the West Bengal Board of Secondary Education had issued instructions in 1989 that “Muslim rule should never attract any criticism. Destruction of temples by Muslim rulers and invaders should not be mentioned.”

Raghuvanshi asked Shrimali, whether this did not amount to distortion? True, that was a painful period of our history, Raghuvanshi said, but should it be erased from our history books? Would that be objective, rational history? Shrimali’s response was the well-practised script : firstly, he did not know that such an instruction was ever issued; if it was issued, he said, he was against it; but one must see what the context was in which the instruction had been issued…

Concerned teachers in West Bengal have been so kind as to send me the circular relating to textbooks for class IX. Dated 28 April, 1989, it is issued by the West Bengal Secondary Board. It is in Bengali, and carries the number “Syl/89/1”.

“All the West Bengal Government recognised secondary school Headmasters are being informed,” it begins, “that in History textbooks recommended by this Board for Class IX the following amendments to the chapter on the medieval period have been decided after due discussions and review by experts.”

“The authors and publishers of Class IX History textbooks,” it continues, “are being requested to incorporate the amendments if books published by them have these aushuddho [impurities, errors] in all subsequent editions, and paste a corrigendum in books which have already been published. A copy of the book with the corrigendum should be deposited with the Syllabus Office (74, Rafi Ahmed Kidwai Road, Calcutta — 16).” Signed, “…Chattopadhyaya, Secretary.”

The accompanying pages contain two columns : aushuddho — impurity, or error — and shuddho. One has just to glance through the changes to see the objective the progressives are trying to achieve through their “objective”, “rational” approach to the writing of history. Here are some of the changes.

Book : Itihasher Kahini, by Nalini Bhushan Dasgupta, published by B. B. Kumar.

The most extensive deletions are ordered in regard to the chapter on “Aurangzeb’s policy on religion”. Every allusion to what he actually did to the Hindus, to their temples, to the very leitmotif of his rule — to spread the sway of Islam — are directed to be excised from the book. He is to be presented as one who had an aversion — an ordinary sort of aversion, almost a secular one — to music and dancing, to the presence of prostitutes in the Court, and that it is these things he banished.

The only allusion to his having done anything in regard to Islam which is allowed to remain is that “By distancing himself from Akbar’s policy of religious tolerance and policy of equal treatment, Aurangzeb caused damage to Mughal rule.”

Book : Bharuter Itihash, by A. C. Roy, published by Prantik.

In a word, no forcible conversions, no massacres, no destruction of temples. Just that Hinduism had created an exploitative, casteist society. Islam was egalitarian. Hence the oppressed Hindus embraced Islam !

Muslim historians of those times are in raptures at the heap of Kafirs who have been dispatched to hell. Muslim historians are forever lavishing praise on the ruler for the temples he has destroyed, for the hundreds of thousands he has got to see the light of Islam. Law books like The Hedaya prescribe exactly the options to which these little textbooks alluded. All whitewashed away.

Objective whitewash for objective history. And today if anyone seeks to restore truth to these textbooks, the scream, “Communal rewriting of history.”

But there isn’t just whitewash of Islam. For after Islam came another great emancipatory ideology — Marxism- Leninism.

The teachers furnish extracts from the textbook for Class V.

“…. after the Revolution in Russia the first exploitation-free society was established.”

“…. Islam and Christianity are the only religions which treated man with honour and equality….”

Thus, not just whitewash, there is hogwash too.

(This article was first published on bharatvani.org and has been reproduced here.)