Nikita Tomar was murdered by a Meo Muslim; read how Nehru and Gandhi brought back Mewatis who had migrated to Pakistan 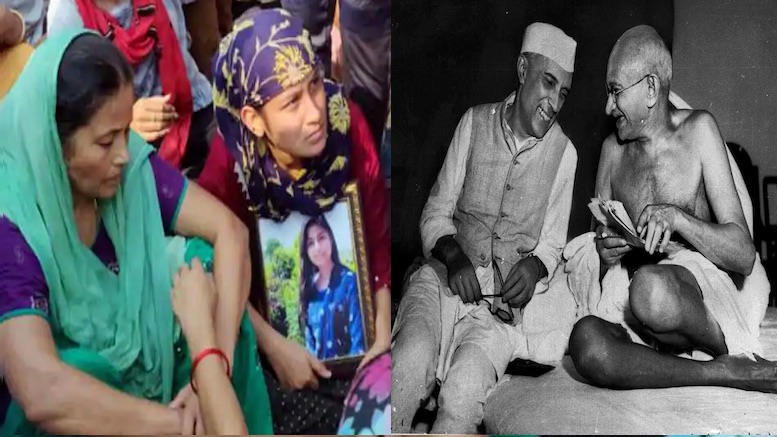 Recently, Nikita Tomar was killed by one Tauseef because she rejected his proposals & refused to convert to Islam. This was AFTER he abducted her earlier in 2018. The accused belongs to Mewat. Increasingly, this has become a norm in this region. Here is the hidden story of Mewat!

This is not just an isolated incident. Mewat has been in the news for rape, abduction, killings, conversion and kidnapping of Hindu women.

Here are a few examples:

In September 2020, a 15 year old girl was drugged and gang-raped by Irshad, Sahil. Police refused to lodge FIR. (Source: The Times of India)

Also in August 2019, a Hindu girl was abducted and forcibly converted by Azim Khan and Rashid. (Source: patrika.com)

In the year 2017, a school in Mewat forced Hindus to convert and read Namaz. (Source: Zee News)

Hindu Sadhus are also under attack in Mewat. In May 2020, Mahant Ramdas was brutally attacked by a ‘peaceful mob’ from ‘peaceful religion’. (Source: Sanatanprabhat.org)

Mewat is not Munger where police can unleash murderous brutality on Hindu devotees. Mewat police file affidavits in court submitting that their lives are in danger when on duty. (Source: https://phhc.gov.in/enq_caseno.php?var1=CRM-M&var2=48565&var3=2018)

I could go on and on, but unless one be willfully blind, one could clearly see a problem here. Mewat is just 60 Km away from Gurugram (Gurgaon), which is a posh hub of urban Bharat. Why is Mewat one of the most backward areas of Bharat and a hub of crime?

A report submitted by NITI Aayog says Mewat is one of the most backward regions in Bharat. The Government has been allocating disproportionately high amount of funds to “develop” Mewat. But all seemingly in vain.

Mewat has 79% Muslim population and a very unique history. Mewat is the home to the Muslim community known as Mewatis or Meos, which forms the majority of the population.

Meo folklore sings the story of their ancestor Dariya Khan, who married and converted a Hindu girl named Shashi Badani Meena. In this wedding, there was a war with the Hindu Meena community, which the Muslim Meos won. This is their inspirational “traditional love story”.

Even in pre-partition Bharat, they became infamous for loot, stealth and abduction. In 1871, the Government of India classified Meos as a “criminal tribe” and kept a close watch on their activities.

In 1947, Mewat was ruled by the Maharaja of Alwar. He decided to join Bharat. The Mewatis, who wanted to join Pakistan, immediately rose in rebellion. They began killing, looting, raping and abducting Hindus. Hindu temples were destroyed. They declared an independent Meostan.

On 7th of August 1947, the Meos looted the rich Hindu settlement of Tijara. Hindus were slaughtered in cold blood. Infuriated, the Maharaja of Alwar launched a campaign against the people who broke the law. As a result, the Meo rebels left the State. They began residing at the borders of Alwar in the Gurgaon region. Even from here, they used to launch occasional raids into Alwar. In Gurgaon, they met Gandhi, Nehru, Jinnah and circulated artificial sob stories of their persecution.

The Hindus also had enough of Meos. They launched a retaliation attacking the Meo settlements. Meos left the region. Many of them went to Pakistan. The influx of Meo refugees attracted the attention of Congress. Delivering lectures of secularism, they blamed Raja of Alwar.

The migration of Meos to Pakistan infuriated Gandhi. Gandhi admitted that Meos were an “easily excitable and troublesome tribe”. But , Gandhi argued, a criminal has to be reformed and not punished. Only then will he have a change of heart.

Nehru’s right hand man Gopalaswami Ayyangar asked the PM of Alwar State (NB Khare) to take back all the Meo refugees who had migrated or were migrating to Pakistan. Khare said ‘We will take them back. But these rebels broke the law in our state. They will be tried and executed.” 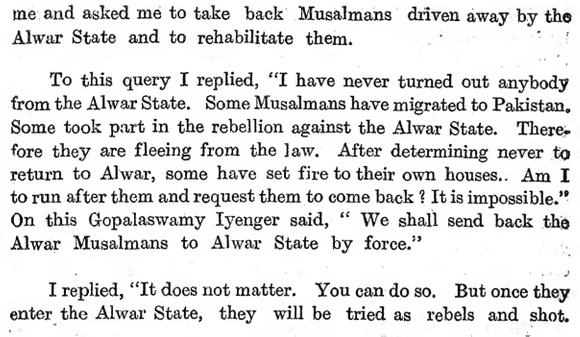 Congress did not like the stand of Alwar state. They wanted Alwar to take back all the Meo refugees who had migrated or were migrating to Pakistan and offer them unconditional clemency. This condition was not acceptable to the Hindus and Maharaja of Alwar.

Congress began threatening the Maharaja of Alwar to take back the Meo refugees. Nehru’s officer Booch told Alwar- “We will bring back all the Meo refugees from Pakistan and forcibly settle them in your state. We have a strong army. We will protect them. What are you going to do?”

Even today, Meos recall how Gandhi had called them ‘backbone of India’. These threats to Alwar Maharaja and assurances to Meos worked their way. Many Meo refugees who had migrated to Pakistan came back. Ironically, Mewat is today known as “mini Pakistan”.