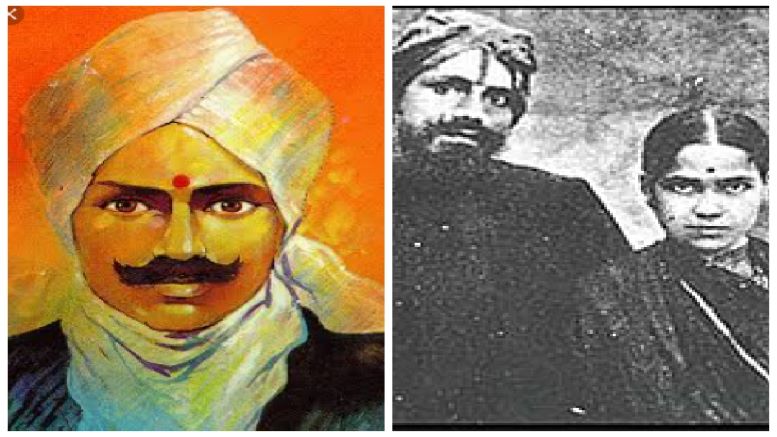 Subramania Bharatiyar is one of those freedom fighters and Bharatiya heroes who should have become a household name across Bharat. Tragically, much like most of our real heroes and sons of the soil, history writers and history books have failed to introduce his contributions and wonderful body of works to Bharatiyas.

Chinnaswami Subramania Bharati, who became popular as “Mahakavi Bharatiyar” was born in Ettayapuram in Tamil Nadu. He earned the title of Mahakavi due to his prolific poetry writing abilities which were a combination of both modern and classical methods. He began writing poems in Tamil at a very young age.

He was well-versed in 14 languages including Sanskrit, Hindi, Bengali, French, Urdu, Malayalam, Telugu and English among others. His nationalistic thought is visible in his belief that all Bharatiyas are the children of one mother.

He was conferred the title “Bharati” meaning the learned one blessed by Devi Saraswati at a gathering of poets and scholars when he was merely a boy of 12 years. His works were nationalistic and reformist but at the same time rooted in Hindu philosophy and tradition as is evident from his body of works.

He wrote poems as diverse as religious poems, long songs, nationalistic poems and poetries for children, on women’s rights as well as those with reformist messages. It must be mentioned here that Bharatiyar was as much a reformist as he was a poet and journalist.

In 1904 he was working as a temporary teacher at the Sethupathi College in Madurai when he came in association with G Subramania Aiyer who was then the Editor of Swadeshimitran. Impressed by his talent Aiyer employed Bharati as the Assistant Editor of the Tamil daily Swadeshimitran. At that time Bharati was also the executive editor of the magazine Chakravartini.

His association with Bagini Nivedita, disciple of Swami Vivekananda, made him take up women’s rights through his poems. It was in 1905, when the partition of Bengal was mooted, that he wrote his first patriotic poem centred around the theme of united Bengal titled  “Long may united Bengal live”.

In 1906, he became the Editor of the English weekly India and Tamil paper Bala Bharatham started by his cousin Thirumalachariar, who was himself a patriot and nationalist involved in the freedom movement as well.

Bharatiyar had already taken the plunge into the freedom struggle and his association with MPT Acharya, VO Chidambaram Pillai and others as well as meeting the Lal-Bal-Pal trio at the 1907 Congress session at Surat only increased his involvement with the freedom movement. It was in 1907 that Bharatiyar was able to publish his first collection of poems Swadesa Songs with the aid of his friends.

In 1908, after the arrest of Pillai, the British also issued an arrest warrant for Bharatiyar who had been fuelling patriotism through his fiery editorials in India and his poetry. His writings shook and scared the British government so much that they swiftly arrested N Srinivasan who had been declared as the Editor of India despite the fact that it was actually edited by Bharatiyar. G Subramania Aiyer had also been issued an arrest warrant.

Faced with imminent arrest Bharatiyar took the tactical decision to avoid arrest by escaping to Pondicherry which was then under the French rule and thereby out of British jurisdiction. While his self-exile in Pondicherry, he continued his editorial work.

Besides continuing writing for India, he also began writing for the daily Vijaya (victory), the weekly Sooryodayam (sun rise), English magazine Karmayogi and the cartoon journal Chitravali. Sreenivasachariar had already moved his printing machines to Pondicherry from where these were being published after they had been banned in the then Madras by the British government.

The growing popularity of these nationalistic newspapers and magazines as also Bharatiyar’s powerful writings gave such a fright to the British that they then imposed such heavy postal regulations in Bharat that the circulation of these publications effectively came to a halt.

The British also clamped down on the remittances of the subscription thereby forcing the publications to shut down completely.

It was in Pondicherry that he came in close association with Shri Aurobindo who had gradually begun withdrawing into a life of spiritualism and away from active politics. Bharatiyar’s association with Shri Aurobindo made him take up such spiritual and philosophical works such as translating the Bhagavad Gita and Rishi Patanjali’s Yogsutras into Tamil.

Three of his philosophical works written during this period certainly worth mentioning are Kannan Paatu (series of songs written praising Bhagwan Krishna), Kuyil Paatu (song of the cuckoo) and Panchali Sabatham (the vow of Panchali).

Bharatiyar – an icon of grit and determination

He had lost his mother Lakshmi ammal when he was a mere boy of five and his father Chinnaswami Subramania Iyer passed away when he was just 16 years old.

Bharatiyar’s married life was mostly spent in penury yet he never let this come in the way of his happiness and his humour. He is said to have possessed a great sense of humour and make light of even tragic circumstances showing us that troubles or difficult times should only make us determined to overcome them with greater grit and determination.

Credit must also be given to his wife and life-long companion Chellammal who was his pillar of strength. She always stood by him through thick and thin till the end.

He spent his final years in Chennai’s Triplicane and visiting the Parthasarathy Temple was a daily affair for Bharatiyar. On a fateful day in August 1921, on his daily rounds to the temple when Bharatiyar was feeding the temple elephant, as was customary with him, the elephant seized him with his trunk and dashed him on the ground.

He was rushed home by his friend Kannan in an unconscious state with severe injuries. Though he survived the tragedy, his health deteriorated and in early September a bout of dysentery took a toll on his already fragile health.

He became critically ill on the 11th of September and finally in the intervening night at around 1.30 AM (12th September 1921) he left his mortal coil. Tragically, there were just about 20 people to bid farewell to this great patriot, freedom fighter and poet when his friend Doraiswamy Iyer performed the last rites.

Though Bharatiyar died unsung, uncelebrated and with his dream of a free Bharat uncherished when he was merely 39 years old, he has left several beautiful compositions for us to cherish and celebrate him, albeit posthumously.

Oh Lord who is the darling of Nanda,
I see in the black of the feathers of the crow,
Your colour of black, Oh darling lord.