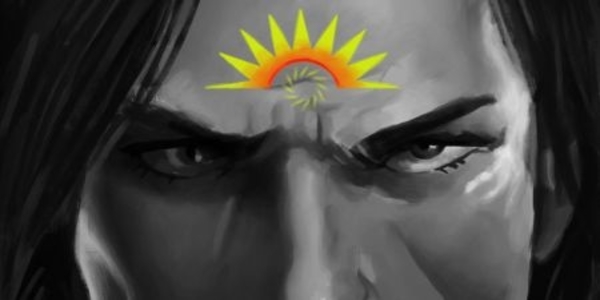 It so happened that before the time the Pandavas were incognito in the kingdom of Matsya, Indra asked Chitrasena – the king of the Gandharvas – to teach Arjuna song and dance in his own realm of Amaravati.

Shortly in the days before the exile, in a curious episode, Duryodhana and Karna got drunk and ventured into Dwaitavana – a rather beautiful lake forest. The 2 drunken warriors tried to enter the camp of Chitrasena who was camping there already before they came. Chitrasena, knowing who they were and being a comrade of both Arjuna and Indra, told them courteously to go away.

The two drunken warriors with their soldiers started to insult Chitrasena in foul language and this started a fight between them. Chitrasena was more powerful than most men on Earth at his time and ravaged most of the troops of the Kaurava prince. In addition, he assaulted Karna and Duryodhana personally at which point, Karna RAN AWAY into the forest, deserting his only (so-called) friend in life to face certain death all alone.

Some of the soldiers who escaped that tumultuous battle quickly realized that Yudhishtira was nearby and knew what an honourable man he was. They soon went to him and begged him to save Duryodhana. Most of the Pandavas were incensed by the request but Yudhishtira calmly told them – “It is Kshatriya dharma to give refuge to any and every person who seeks it of them – even if it be an enemy.” He then dispatched Arjuna to save Duryodhana. Arjuna heeded his elder brother and according to the code of a Kshatriya, rode out and stopped Chitrasena from killing his own enemy (Duryodhana).

Duryodhana was so ashamed and still inebriated that he ran around the forest searching for his traitor friend. Karna was found skulking under a rock, crying in fear. And when Duryodhana told him that the worst was over, Karna continued crying saying that “He was still scared about Chitrasena.” Duryodhana was so ashamed at this point – of being betrayed by his own friend and of being saved by his enemy that he almost committed suicide. Karna stopped him and then vowed that he himself wouldn’t touch alcohol or meat till the Pandavas were all killed. Karna never fulfilled the vow, getting himself killed on the 17th day of Kurukshetra. What is to be learned –

Fact is that Duryodhana cared two hoots for caste as long as his agenda was fulfilled. The fact that he was able to portray his dubious agenda as a sort of caste-breaking was his evil genius. Nevertheless, that does not reduce the nature of the inherent vileness present in the act of making Karna a king. When Karna deserted Duryodhana to face Chitrasena all alone, Duryodhana later on never revoked Karna’s imperial privileges. Wouldn’t you at least reprimand a friend who deserts you – if you ever truly valued his/her friendship? Duryodhana does not even question Karna. He in fact seems to have expected nothing more than this from this duplicitous ‘friend.’

Modern historians don’t accept Karma as a ‘scientifically’ provable concept and therefore, Karna, Duryodhana and Shakuni are normal humans to them. They also consider Krishna a normal human – something popular among the so-called ‘atheist’ Hindus. The point remains immutable – evil cannot be justified no matter how twisted a logic you might have.