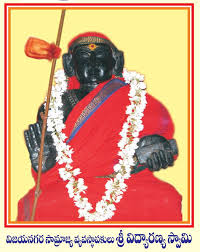 Whenever historians speak about the history of Bharat, they call the millennium between 10th and 20th century as the period of Hindu slavery without mentioning the extraordinary defense by Hindus of their Dharma against the invaders, unlike other ancient pagan cultures.

The main cause of this defense, even after the destruction of various Hindu empires across the country, was the repeated efforts of various teachers and peethadhipathis (commonly knowns as gurus in Bharat) who were mainly Brahmins, as opposed to the preachings of certain British lovers that Brahmins contributed nothing towards society except oppression of others.  The efforts of these people who were neither hungry for power nor fame gave birth to some great warriors of Dharma like Chhatrapati Shivaji, Krishnadeva Raya etc.

Let us see one such example with the help of the life history of 12th Jagadguru of Sringeri Sarada Peetham, Sri Vidyaranya.

Vidyaranya, known as Madhavacharya in his purvaashrama (life before taking up sanyasa), was born in 1268 CE to Mayannacharya and Srimatidevi. He was eldest of four siblings, which included his two brothers Sayana and Bhoganatha along with his sister Singaladevi. The three brothers completed their earlier education under Shankaranada and then moved to Kanchi to pursue further education under Vidyateertha. During this time began Madhavacharya’s friendship with Venkatanatha (commonly known as Sri Vedanta Desika).

From his childhood, Madhava possessed the qualities of patriotism, firmness, practical sense, political awareness and righteousness.  Hence, Madhava during his education developed the idea of establishing a ‘Dharma rajya’ to protect the cultures and traditions of the nation from the atrocities of Islamic invaders.

After the loot and destruction of Srirangam by Malik Kafur, the political conditions in the South turned cruel. The people had become spineless. The Hindus were so fear stricken that they were afraid of protesting against injustice. The rulers were torturing the Hindus and plundering their temples. But there was no united protest anywhere. There was need for a leader who could inspire the people to fight for Dharma.  An architect of divine stature was needed, who could infuse courage and hope into the hearts of the people by his admirable character.

It was at this juncture that Madhavacharya wished to lay a firm foundation for a stable empire. He wanted an empire to be founded on the principles of Dharmashaastras so that the citizens could live in peace. He wanted to infuse a spirit of courage into the hearts of people who had lost it, and who were unable to protest against adharma. He did not get any help or co-operation for this task from any King or administrator. Therefore he renounced his worldly ties of family and accepted Sanyasa from Sri Bharathitheertha of Sringeri. After this, he settled at Pampakshetra (modern day Hampi) and performed tapa for the fulfillment of his aim.

During this time two brothers by the name Harihara and Bukka, who were the sons of Sangama raya of Kummatadurga, met Vidyaranya, and it was by this meeting that the fate of Dakshin Bharat changed.  The brothers who were taken as prisoners by Muhammad Bin Tughlaq after his victory over Kummatadurga were forcibly converted to islam and made to serve in his army. After few years of Islamic slavery, the two brothers escaped from their captors and arrived at the feet of Sri Vidyaranya.  Vidyaranya decided to make his dream of Dharma rajya into reality with the help of these brothers and hence he reconverted them back to Hindu Dharma.

Muhammad Bin Tughlaq, Sultan of Delhi, had defeated Jambukeshwara Raya, King of Anegundi and had him imprisoned in his own palace. He had appointed Mallik Nayab as his representative to rule over the State. Harihara and Bukka organised a band of patriotic youths according to the advice of Vidyaranya. They entered the fort of Anegundi very cleverly and took Mallik Nayab prisoner when he was fully drunk. Thus, they freed Anegundi without bloodshed from its enemies. They set free the King and his family. The flag bearing the symbol of Lord Vishnu in his incarnation as Varaha (Boar) was hoisted on the fort of Anegundi.

By making use of the celebration of this victory, Vidyaranya selected a suitable place in Pampakshetra and laid the foundation for a new city named Vijayanagara. The city was the capital of Vijayanagara empire (which served as the protector of Dharma in Dakshin Bharat for about three and a half centuries) for about two hundred years till its cruel destruction at the hands of Bahmani sultans after the Battle Of Talikota, which made Rama Raya utter his last words as “Narayana Krishna Bhagavantha” (Reference: https://manasataramgini.wordpress.com/2004/11/07/the-reign-of-ramaraya-and-the-battle-of-talikota/).

As desired by Vidyaranya, Harihara became the king of the new empire. Bukka ruled over it after the death of Harihara. Vidyaranya guided the Kings as both Prime Minister and Rajaguru. Hence, Vidyaranya is called as Karnataka simhasana prathishtapanacharya (the Founder-Preceptor of Karnataka) by the people of Dakshin Bharat.

The life of Vidyaranya stands as a great example of the efforts of various gurus in Bharat trying to keep their traditions alive despite various attacks, which has resulted in Bharat being the only country in the world to have withstood the attacks on it by monotheistic religions for about a thousand years.

(Note: This article first appeared at https://paanchajanya1284.wordpress.com/2016/09/13/jagadguru-sri-vidyaranya-a-forgotten-hindu-nationalist/ and is being republished here by the same author)

Spain – The only reversal of Islamization