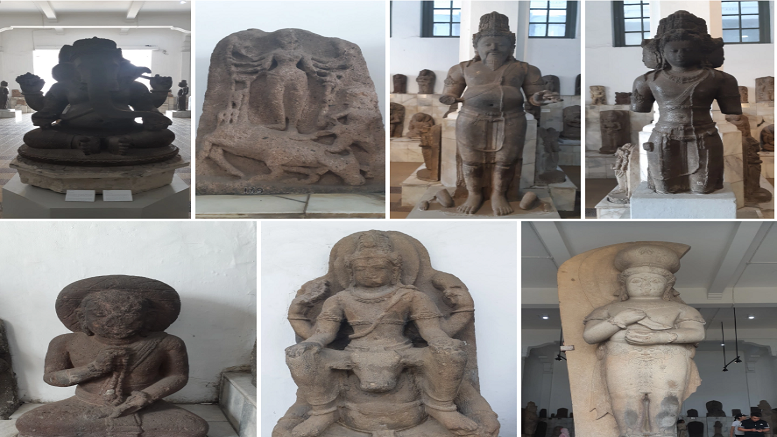 For a person with interest in history and extent of Hindu Dharma in South East Asia, a visit to Jakarta’s national museum is a must. Every single thing in this ancient history museum is a testimony to its Hindu past.

One wonders if she is in Bharat or Indonesia when walking by the multitude moortis of Ganesha, Shiva Parvati,  Mahishasur Mardini,  Agastya Muni, Brahmaji, Vishnu and  Harihara amongst others. There also stands a mighty Bhairava excavated from Sumatra. In addition to these moortis, the museum also has “prashastis” left by kings commemorating specific events.  Few pictures below: 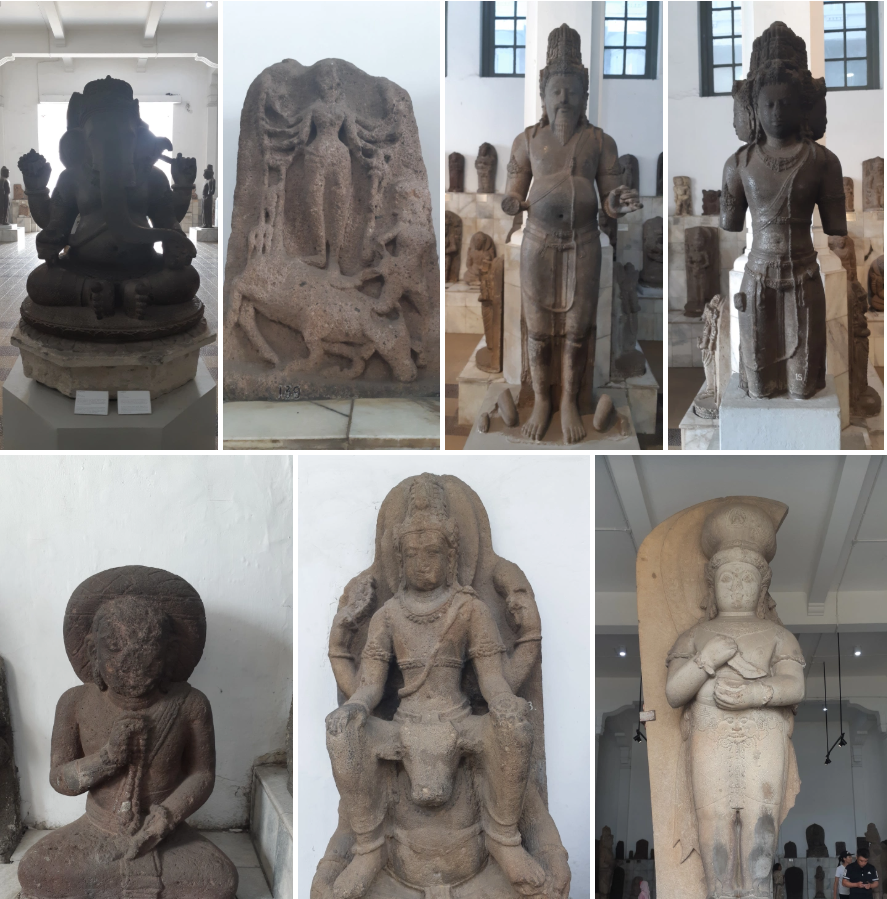 The oldest scriptural evidence of  Indonesia’s Dharma connections is found in Ramayana which is dated anywhere between 10,000 BCE to 5000 BCE , the former by traditional experts. The shloka says

Sugriva sends an expedition of his ‘vanar sena’ to Yavadwipa (present day Java)  – a land of gold, silver, precious gems, a land with many gold mines, administered by seven kingdoms. To be noted here is that the island of Sumatra in present day Indonesia has been called Suvarnadwipa since ancient times.

Clearly, Jambudwipa and its people knew a lot of Yavadwipa then. This couldn’t have been possible without any connection. A guide at one of the temples in Java mentioned some of Sugriva’s people had stayed on in Yavadwipa. Who can say, some day we might find a common ancestry of certain Bharatiyas and Indonesians.

Later day, Indonesian legends talk about a Prince Aji Saka from Bharat who introduced Sanskrit and Brahmi/ Pallava script to Indonesia. It is believed that he came in the 1st century CE (~78 AD) and brought with him the Saka calendar (spelled Caka in Indonesia). In fact, Aji’s coming to the Dwipa is said to mark the beginning of the Caka calendar.

The subsequent Hindu/ Buddhist kingdoms followed the Caka calendar till their existence until 1500s CE. All inscriptions found later were ascribed per the Caka era. Prince Aji Saka is considered the first Hindu king of Java. While there are conjectures about Aji Saka’s connections with the Sakas who had migrated to Bharat from central Asia, no evidence of the same has been found.

The oldest archaeological evidence coincides with the Aji Saka legend. A Ganesha moorti dated 100 CE has been found on the peak of Mount Raksa in Panitan island, west Java. Ancient Chinese manuals also talk a certain Hindu King Deva Varman of Java who had sent presents to the the Chinese emperor of Han dynasty in the year 132 CE.

A foolproof dated evidence of Hindu kingdom in Indonesia comes from 4th century CE from Kutai in Kalimantan. The Kutai inscriptions are in Sanskrit language written in Pallava/Brahmi script. 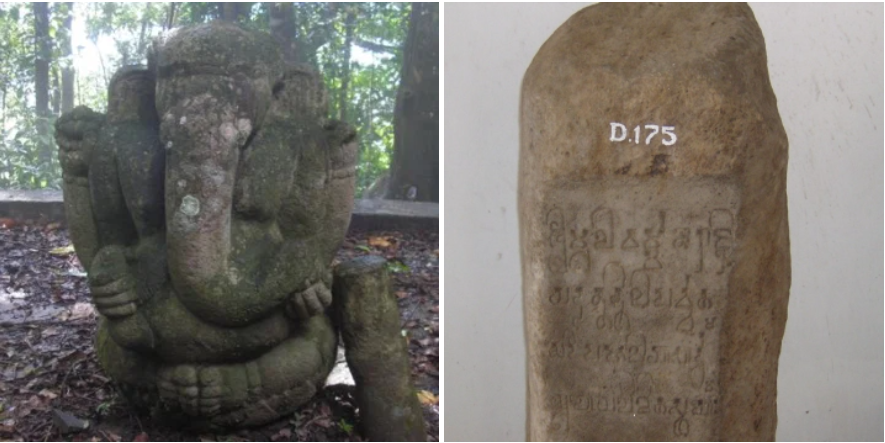 The inscription is found on seven Yagna stones commemorating events related to Raja Mulavarman, a the third generation king of the Kutai kingdom following his father Raja Asvavarman and grand father Raja Kundunga. Asvavarman and Mulavarman are both Sanskrit names while Kundunga is not.

A theory states the Hindu influence started gaining ground after Raja Kundunga established the Kutai kingdom, more so from his son Asvavarman’s time. The “varman” in the names has similarities with names of Pallava kings in South Bharat indicating a very strong influence of Pallavas in the archipelago.

The inscriptions talk about yagnas such as Rajsuya undertaken by Raja Mulavarman to establish his “Chakravartin” status where in other conquered kings accepted his ruler-ship and paid tributes/ taxes to him. My own view based on the Kutai inscription is that the Hindu influence would have been much older and much pronounced even before King Asvavarman’s time because adoption of formal Sanskrit and rituals couldn’t be possible by a whole lot of citizens in just a generation.

Moreover, the ritual would have a meaning if the other kings and kingdoms also bought into it. This further indicates a more widespread and deeper presence of Hindu worldview and life here.

From 5th century onward, there are numerous archaeological evidences, travel accounts as well as  literary works (e.g. Nagarakretagama) that give a peek into Hindu Indonesia. Chinese Buddhist monk and traveler, Fahien’s ship got stranded on Java island on his way back to China from Bharat/ Sri Lanka. He makes a note of a flourishing brahmin culture like Bharat in Yavadwipa. This was year 414 CE. 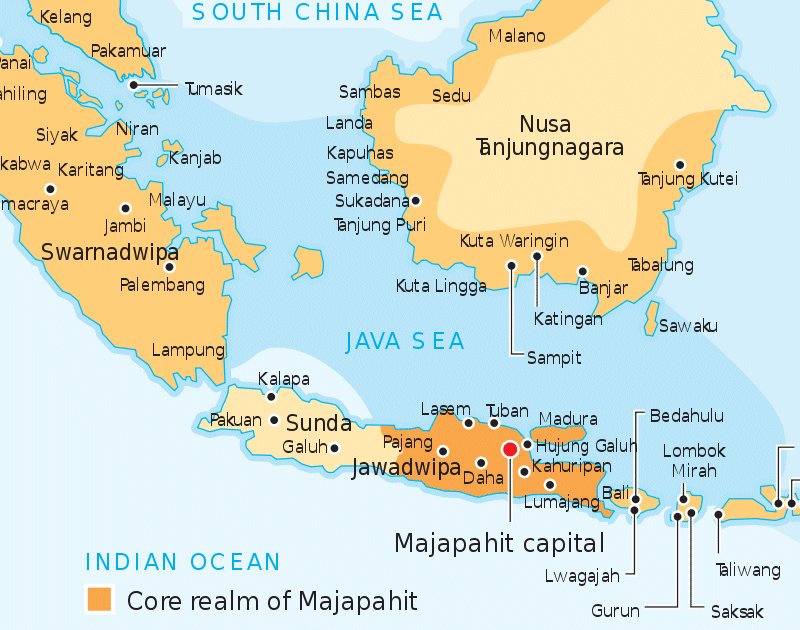 The story until 13th century is the usual one. Dynasties came and went. Some kings had more expansionist ambitions than others hence, territorial struggles happened. So hence and so forth. All these years the trade with Bharat, China was bustling.

Around 10th-11th century CE, the Chola kings of South Bharat exerted significant influence in Indonesia politics. This period also so significant development in  art, literature and architecture both religious and cultural. Hindu Dharma in Indonesia evolved in its own right, connected to, but not limited to the Bharatiya origins. Examples of notable literal include works such as Agastya Puran and the various Kakawins – poetic expositions on Ramayana, Mahabharata as well as local legends.

By 12th Century CE, back in Bharat, the North was already getting a taste of the barbaric Muslim invaders from central and west Asia. The trade with Arabs had also flourished. These Arab and Persian traders found their way to Indonesia through their Bharatiya counterparts (especially traders from Gujarat). With these Arab and Persian traders came Islam and Islamic missionaries to Indonesian archipelago.

Gradually, initially but surely, from current day Malaysia and Sumatra, Islam started gaining a firm footing in the whole of South East Asia. The coastal kingdoms were to first to adopt Islam. Raja gave way to Sultan. And just in the subsequent 200-300 years, the ancient Hindu civilization vanished, the Indonesian Archipelago became dominated by Muslims.

This downfall of Hindu kingdoms can be attributed to many factors. In some cases, it was influence of  a Muslim queen (e.g. Malay King Parmeswaram), in others, it was defeat at the hands of newly minted Muslim Sultans (e.g. fall of Sunda Kelapa, present day Jakarta) or in some other, rebellion and eventual defeat of Hindu kings by sons begotten by Muslim queens (e.g. rise of Demak Sultanate and eventual fall of Majhapit kingdom). Of course, lack of unity and unified approach to tackle the challenge of Islam among Hindu Kingdoms didn’t quite help.

Yet, the speed of Islam’s expansion and replacing of native religion does boggle one’s mind. The popular narrative is that Hindu kings and rulers just instantly converted without resistance and so did the natives. Life went on as usual. However, when one sees the mutilated moortis in the museum, empty vigrahas in the temples which are themselves in a sorry state and would have been lost to the world had it not been for the Dutch archaeologist – one wonders if the dominant narrative hides more than it says.

What does seem likely is that once the king was either converted to Islam or was defeated by another Muslim king, the kingdom started converting and became predominantly Muslim very quickly. What bothers me is the suggestion that this was a peaceful process. Nowhere in the world, that has been the case.

How is that medieval Indonesians were so eager to give up their native faith? Across the world, Islamic expansion has been bloody. Indonesia couldn’t have been different. Either by force and/or by harsh imposition of Jiziya tax on non converts or overt patronage of only Muslim converts are most likely the reasons for wholesale conversion. The sorry state of the Hindu art pieces and architecture seem to lend credence to forced conversions rather than a happy acceptance.

As Islam spread, few staunch Hindus moved eastwards to east Java and Bali. After the fall of the last Hindu king of Majhapit by Demak sultanate in the early 16th century, many Hindus including royalty moved to Bali. By this time, the Dutch and Portuguese with their colonial aspirations had entered the scene bringing with them christian missionaries . And Hindu Indonesia was lost surviving in small pockets in parts Kalimantan, East Java and Bali.

Bali continues to be staunchly Hindu to this day, while in other parts Hindu heritage shows up in museums, folklore, folk arts and national symbols. Sanskrit influence on Bahasa is conspicuous to this day.

Indonesia gained independence from the Dutch in 1945. But the Hindu struggle for existence and acceptance did not end.

(This article was first published on the author’s blog and is being reproduced with permission, after minor edits to conform to HinduPost style-guide)