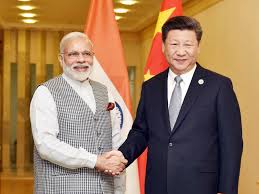 Father, Prof. Raghu Vira, studied Chinese at the School of Oriental and African Studies, London, in 1928. He was impressed by the beauty and complexity of Chinese characters. He came from a background of Sanskrit philosophy and grammar. The Sanskrit grammar of Panini is very intricate. Father saw Panini in the complex visual forms of Chinese ideograms. At the same time, back home, Bharat was seeking new dimensions to her freedom movement in terms of what would be the nature of the independent State.

China, Japan and other countries of East Asia were independent. One of the attraction points for father was to understand as to how Chinese civilization had been able to sustain her independence over five thousand years, as well as maintain her cultural identity. He was fond of chinoiserie and our home was overflowing with Chinese paintings, books and other objects.

I started learning Chinese characters in 1937 at the age of ten. I asked my father: where are the consonants and vowels in them? There are no letters like A, B, C, D? How do the Chinese read? Father had a book on the Chinese script by Karlgren titled Sounds and Symbols in Chinese published by the Oxford University press in 1929. It is a fascinating account of how the Chinese characters have evolved.

It shows how early pictographs were sophisticated into manifold characters: sometimes on the basis of phonetics and sometimes by putting two characters together, e.g. sun and moon for bright. Chinese language is not only complex but it is a mirror of their thinking processes. The addition of elucidative classifiers was great fun for me. The syllable shan means mountain as well as shirt. To surmount the difficulty a classifier is added: tso ‘site’ in i tso shan ‘one site mountain’ means a mountain, while kien ‘article of dress’ in i kien shan ‘one article shirt’ means a shirt. The simplicity of Chinese grammar and the absence of an involved syntactic structure are characteristic.

Ours was the only Bharatiya home lined with Chinese printed texts and rare woodprints. The wood-printed books were different from Bharatiya books. Their binding style was pleasing, the print was clear and the paper was light. It had a feel different from the normal paper that we used. The texture of the paper showed that Chinese are a different people, a people who had treasured their classical identity both in the style of binding and in the manufacture of paper. They adored the perfume of their culture. Culture brings beauty to life; it is the aesthetics of life.

Father asked me to read Chinese writings on Bharat. The first book that I read was the travel account of Fa-hsien who came to Bharat in 400 AD. Thereafter I read the other two Chinese pilgrims Hsuan-tsang and I-tsing in English and later on in Chinese. It was interesting to feel the devotion extraordinary of Chinese pilgrims to Bharat. Despite having a developed language and a rich culture, they sought fine arts and philosophic thought in Bharat. They wanted a cultural enrichment of hearts, minds, and aesthesis as a euphoric evolution of their mighty state. China has been the only continuous ‘nation state’ in the world for the last five thousand years, both conceptually and politically.

Moreover, it is a rare phenomenon that the Chinese have documented their history for these five thousand years in the Twenty-four Dynastic Annals till 1911. The contrast between Bharat as a cultural entity with several kingdoms and China with more or less a single state conceptually is important to perceive the Chinese mindset. The Chinese historical tradition has lessons for us.

About 3000 texts were translated from Sanskrit into Chinese from the 2nd to the 13th century. They are collected in the Chinese Tripitaka. Many of them have been lost in Sanskrit originals and so they are unique for Bharatiya history. As a historian of Bharat’s culture, father was fascinated by what he found in Chinese, as their Sanskrit originals had been lost. For him Chinese was a rich source on Bharatiya art and thought, literature and history. About 250 Bharatiya teachers went to China from the 2nd to the 13th century, till Islam conquered Central Asia when Buddhist monasteries were destroyed and the pilgrim route died down. He was curious to see how Chinese had preserved all these texts for such a long period of time. Bharat’s archaeology would not be complete without Hsuan-tsang. When Alexander Cunningham mapped the archaeological sites in Bharat in the 19th century, his patron saint scholar was Hsuan-tsang. Likewise Aurel Stein was also guided by Hsuan-tsang in his archaeological expeditions to Central Asia.

Tagore went to China in the 1920s and was welcomed enthusiastically. Father was influenced by him and knew him personally. Sporadic correspondence was exchanged between them. Poet Tagore established the Cheena Bhavan at Shantiniketan and Chinese studies were initiated in Bharat for the first time. Father collaborated with Poet Tagore to found the Bharat-China Friendship Association.

Chinese poems and sketches of Ahimsa

Monk Feng Tzukai, a friend Of Chairman Mao, wrote poems and drew pictures on Ahimsa. Father translated its first volume in English. Feng Tzukai was a Buddhist monk, calligrapher and artist. A Chinese scholar did his doctorate thesis on his art some decades ago.

Ahimsa was a central concept in our freedom struggle. Gandhiji was impressed by this book and that the Chinese also believe in Ahimsa. Father wanted to strengthen Sino-Bharatiya friendship on a cultural footing that could absorb the shocks of political misunderstandings. Gaps of communication could be tided over by such an approach and could generate an ambience that allows us to see beyond parochial politics.

Multiple identities operate in different domains of life. These poems were written in the context of Buddhism. The Chinese have a Confucian identity, enriched by a Buddhist identity. Their nonviolence is kindness to animals on special days. The vast Buddhist population of China is keen for pilgrimage to the Land of Lord Buddha. China always had a special place of respect in the minds of Mahatma Gandhi and Pandit Nehru as a great country, a neighbour and a cultural comrade. Father was a rare Bharatiya who had studied the language and culture of China. The sinological expertise of father brought him respect at the national level. Mahatma Gandhi. Pt. Nehru and other leaders were thrilled by his narration of the fine details of Bharat’s contacts with Chinese culture.

Mahatma Gandhi had Japanese monks at his Ashram at Wardha. They were reciting the Chinese text of the Lotus Sutra or Saddharma-pundarika-sutra.

Gandhiji wanted to know its Sanskrit original and English translation for which he invited father to Wardha. Father gave him both the Sanskrit original and its English translation. Gandhiji was happy to know that the Chinese had translated thousands of texts, and that too with devotion. Gandhiji had a long conversation with father, including the three monkeys on his table. The monkeys are sacred to Buddhism, as a monkey had made an offering to the Buddha and as a consequence he has reborn as the Great King Asoka. An offering mentioned in the Buddhist texts became so prominent in the culture of East Asia that the Three Monkeys found a place on the table of Mahatma Gandhi.

Ramayana in China via Samarkand

Father translated a brief version of the Ramayana from Chinese into English. It had been translated into Chinese from the Sanskrit Sat-paramita-sutra on the six perfections by monk K’ang Seng-hui of Samarkand in AD 251. Sanskrit was a language of international commerce and intellectual expression in Central Asia with which China had active Contacts. During the struggle against British imperialism. Bharatiya scholarship thought of the global contacts of the country and father found Chinese studies a valuable tool to comprehend the international role of Bharat in antiquity. Samarkand was an important centre for Bharat-China exchanges.

People in Samarkand knew both Sanskrit and Chinese. The Buddhist monk-scholars of Samarkand translated several texts from Sanskrit into Chinese. Central Asian monks from other kingdoms also contributed to the spread of Indic traditions to China, because of their trade relations_ The horses Of Ferghana were sent for the Chinese cavalry. Buddhist monks came on these horses. Central Asian monks were expert horsemen. They knew to train them, to treat them if injured or ill. They became crucial to the Chinese defence system.

In 1983, I went to see the monastery where K’ang Seng-hui lived and wrote. The ancient monastic structure does not exist, but a new monastery has been constructed at the site to pay homage to him and to the long tradition of translating Buddhist Sutras.