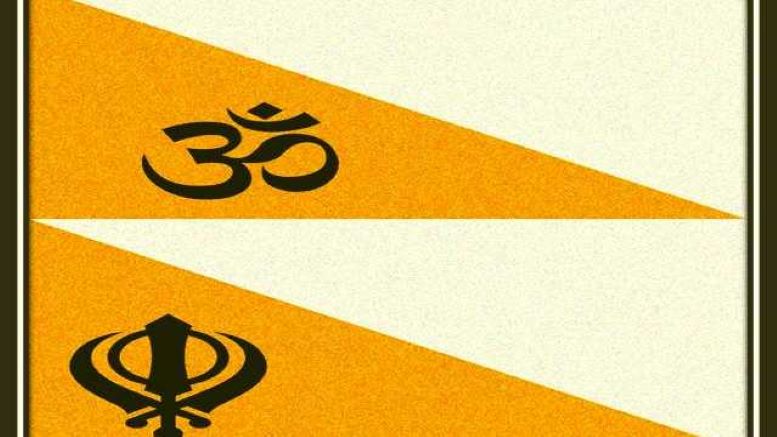 In recent times, the Sikhs Vs Hindus debate has been set off by some elements who want to project Sikhs as ‘saviors’ of Hindus. Earlier this year, we saw SAD leader Harsimrat Kaur Badal attempting to demean and guilt-trip Hindus to justify the Khalistani violence on Republic Day.

As HinduPost has already pointed out, the “Sikhs Vs Hindus” argument is a divide whose seeds were sown by the British and fault line which is now being exploited by Islamist-Khalistani combine. It has now become fashionable to bash and demean Hindu dharma and use colonial tropes to separate it from other indigenous Dharmic faiths that are more often than not offshoots of Hindu dharma.

The Sikh community became militarized under Guru Hargobind, the sixth Guru. Guru Arjan Dev’s execution by Jahangir in 1606 prompted Guru Hargobind to make military training a priority for his followers. He was instrumental in transforming the personality of the Guru from a spiritual leader to a warrior. He also created the Sant Sipahi. Essentially, the execution of Guru Arjan Dev compelled the Sikhs to take up arms so as to defend themselves from the Mughal tyrants.

It was the Rajputs who trained the Sikh warriors. Rai Sigra and Rai Jaita provided weapons training to Guru Hargobind and his troops. Guru Hargobind was accompanied by 52 Hindu princes after Jahangir released the former from Gwalior fort. Guru Gobind Singh’s army was helmed by a Rajput Alam Singh Chauhan Nachna who hailed from Sialkot. He has the credit of saving Guru Gobind Singh from a sudden attack. He also played a crucial role in several battles.

Hindus always respected and supported Sikh Gurus but there have been Sikhs who have sided with the Mughals. Seventh Guru Har Rai’s eldest son Ram Rai was one of those who joined ranks with the Mughal tyrant Aurangzeb.

“Though Ram Rai managed to please Aurangzeb, Guru Har Rai forbade all Sikhs from ever associating with Ram Rai. Displeased with his elder son Ram Rai, Guru Har Rai declared that his younger son Har Krishan the next Sikh Guru before he passed away in 1661”, notes OpIndia.

The relations between Hindus and Sikhs has often been of mutual respect and recorded history shows that both have ‘saved’ each other on numerous occasions. So to say that the Sikhs are the ‘saviors’ of Hindus in an attempt to guilt-trip the latter into submission is both dishonest and unwarranted.