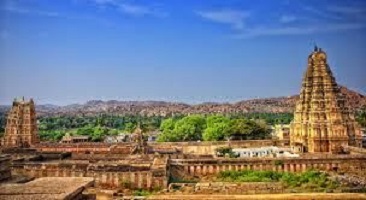 In this series of articles, as we look to explore various ancient temples of the city of Vijayanagara, we lament about the ruined condition of such marvelously built temples. Though the tour of archaic temples of the city of Vijayanagara can make your heart skip a beat with grief, there are a few ancient temples which escaped the plunder and destruction of the city at the hands of Moslem plunderers. One such temple which can be still found in working condition is the Virupaksha Mandira.

Virupaksha Mandira is the most ancient temple of the city of Vijayangara. It has perpetual references in history from the 7th century making it clear that the temple subsisted well before the time that the city of Vijayanagara was built. Virupaksha optically discerned in this temple is a form of Shiva with Pampa as his consort.

Initially the temple was in the form of a diminutive shrine. Later it was elongated to become an immensely colossal intricate structure during the rule of Vijayanagara emperors (mainly Krishna Deva Raya) who considered Virupaksha as the pristine ruler of Vijayanagara. This can also be seen from the signature of all the emperors which are in the designation Sri Virupaksha.

The temple lies on the southern bank of the river Tungabhadra and welcomes us with its 160 ft tall and nineteen tiered gopuram dating back to the 16th century i.e. after the Battle of Talikota which resulted in the destruction of the city of Vijayanagara. The architecture of this gopuram is such that the inverted shadow of the gopuram falls on the western wall of the temple. On entering through the gopuram, we see sundry deities from different temples ravaged during the Moslem invasion in the outer prahara of the temple. One of the most unique murthi is that of Narasimha in the sitting posture with his one hand resting on the knee and the other hand on his seat.

On entering the inner prahara of the temple we see the shrines of Virupaksha additionally called as Pampapati, Pampa and Bhuvaneshwari. The shrine of Bhuvaneshwari has the sri yantra made by Sri Vidyaranya Swami using the gold he is said to have obtained from Goddess Lakshmi by performing a penance with the Kanakadhara Stotram.

After having the darshan of Virupaksha and all the other deities we see a small exit through the western wall on the outer prahara of the temple which leads us to the Samadhi of Karnataka Simhasana Prathishtapanacharya Sri Vidyaranya Swamy who was the guru of the brothers Harihara and Bukka, who established the Vijayangara empire. It is believed that Vidyaranya Swami guided Harihara and Bukka to establish the Vijayanagara empire as the savior of Hindus in south Bharat, when Hindus throughout the country were facing the terror of moslem invasion.

A minuscule path from the Samadhi of Sri Vidyaranya Swamy leads us to a small tank on the backside of the temple with a peepal tree which is considered as the place where Vidyaranya Swamy performed his penance and obtained wealth from Goddess Lakshmi. The tank is connected with the Tungabhadra river in such a way that water enters the tank from one end through a canal and leaves through the other end. Lamentably, the tank and the mandapa surrounding it are in very bad condition requiring immediate renovation.

The Virupaksha Mandira still has many utsavams being performed with the Chariot festival in the month of February being the most famous one. It is attended by thousands of people coming from various parts of Karnataka to have a glimpse of Lord Virupaksha on the chariot. Thus the Virupaksha Mandira being the oldest temple of Hampi makes the visitors of the city of Vijayanagara feel ecstatic during their peregrination through its efficient functioning among the other ruined temples of Vijayanagara.

We will see about the other ancient temples of Vijayangara in our articles to follow.