The Fight for a Sri Ram Temple in Ayodhya Goes On 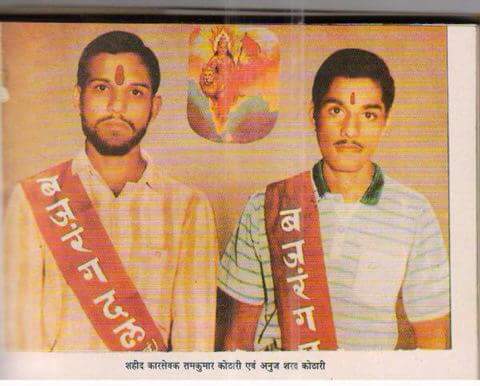 On Dec 6, 1992, thousands of kar sevaks who had gathered at Ayodhya, the birthplace of Bhagwan Ram, brought down the dilapidated Babri Masjid which was built by Mir Baqi in 1528-29 CE on orders of the Mughal emperor Babur after destroying a pre-existing Hindu temple.

However, the Hindu struggle to re-acquire one of their holiest spots continues to this day. In 2010 the Allahabad High Court awarded 2/3 of the disputed site to Hindus and 1/3 to Muslims, after excavations by the Archaeological Survey of India (ASI) showed that the predating structure was a massive Hindu religious building. Both the Akhil Bhartiya Hindu Mahasabha and Sunni Waqf Board moved the Supreme Court challenging the HC verdict – the matter languishes in courts to this day.

The fraud of our eminent historians who ganged up to falsify history and deny the existence of a Hindu temple which was destroyed by the Mughals, has now been proven beyond doubt.

As Indologist Koenraad Elst states in this article, “until the 1980s, the forcible replacement of the temple by the mosque had been a matter of consensus. Yet, in a statement of 1989, Jawaharlal Nehru University’s ‘eminent historians’ turned an unchallenged consensus into a mere ‘Hindutva claim’. The eminences asked to witness in court had to confess their incompetence one after another (as documented by Meenakshi Jain in Rama and Ayodhya, 2013): One had never been to the site, the next one had never studied any archaeology, a third had only fallen in line with some hearsay, etc.“

Earlier this year, Dr. KK Muhammed, former Regional Director (North) of Archaeological Survey of India and a member of the excavation team that found remains of a Hindu temple underneath Babri Masjid, claimed that Left historians like Irfan Habib and Romila Thapar had thwarted an amicable settlement to the Babri Masjid issue.

Yet, despite these indisputable facts of history, Hindus are still waiting for closure in one of the most grievous wounds that our civilization has suffered. Apart from Ayodhya, the mosques built after destroying temples in Mathura (birth place of Sri Krishna) and the holy city of Varanasi are two more festering wounds in the Hindu psyche.

Worse, many urban Hindus are oblivious to what Ayodhya and the Ram Janmabhoomi movement mean to Hindu masses and to the Hindu civilization. Deracinated Hindus have drunk the kool-aid of secularism peddled by colonizing European nations who till date proudly proclaim their Christian identity and have actually created a city state called Vatican City in the heart of Europe and given the Christian Pope an influential voice on the global stage.

But there are millions of Hindus who continue to nurture their heritage and roots. They will not forget the long line of Hindus who have sacrificed their all in defense of our way of life and unique worldview. The Kothari brothers – Sharad and Ram – are two such names from recent times to which Hindus will remain forever indebted.  They were among thousands of Hindus killed in 1990 when the then UP CM Mulayam Yadav ordered firing upon kar sevaks.

To this day, secularist and Islamists claim that the demolition of the Babri Masjid was a ‘blot on India’s constitution’, but they go quiet when the destruction of hundreds of Hindu temples in Kashmir PRE-DATING the Babri Masjid demolition comes up. This vandalism and destruction of Hindu temples by Islamists in Kashmir valley continues to this day…

And while Babri Masjid demolition rued and remembered by Muslims across the sub-continent and the rest of the Islamic world, Hindus are largely unaware of the religious persecution faced by Hindus & frequent attacks on Hindu temples in Muslim dominated regions like Kashmir, Pakistan, Bangladesh, Malaysia etc. Even other parts of Bharat like West Bengal and West UP are fast deteriorating to a Kashmir like situation as the recent Kairana exodus demonstrate.

The obstacles might seem huge, but the struggle for a Sri Ram mandir at the Janmabhoomi in Ayodhya will continue unabated.