Everything you need to know about Keezhadi: anti-Hindu conspiracy to rewrite Tamil history 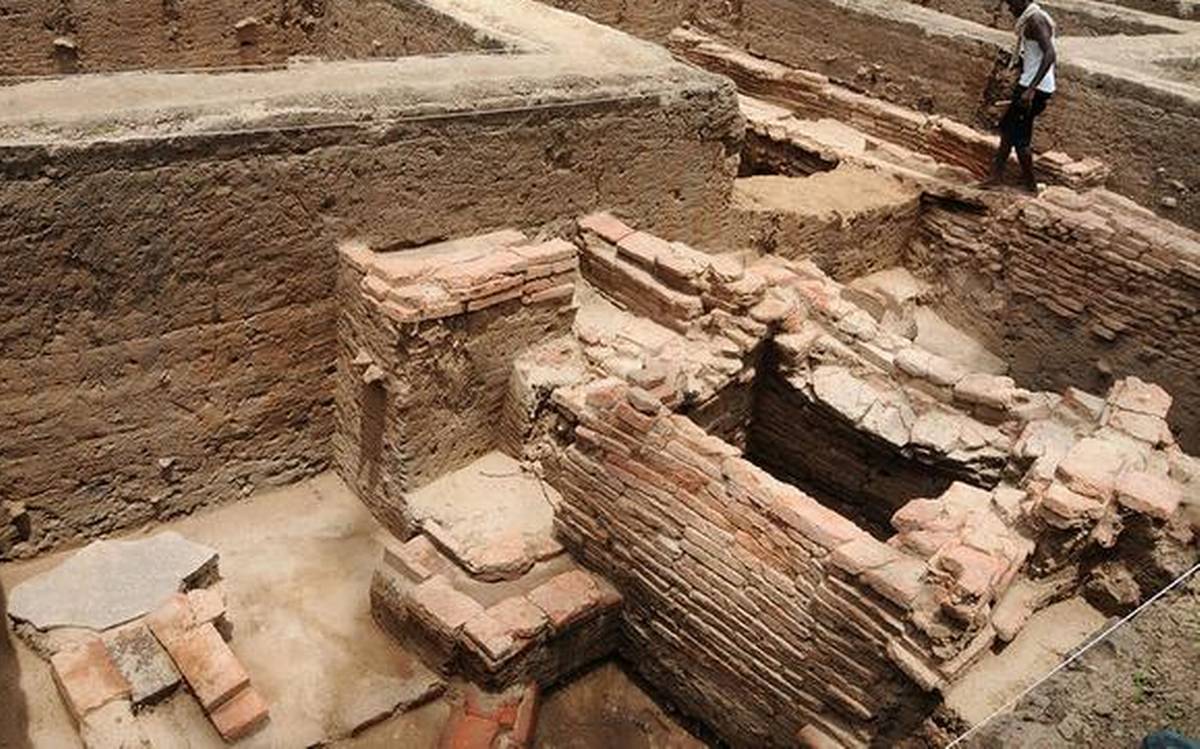 The archaeological site of Keezhadi has made much news in past few years. Starting in 2015, excavations were done at this site and have been regularly reported in newspapers. There have been many attempts to link it to the Harappan Civilization. In this article we shall see how the ‘Breaking India’ forces at work in Keezhadi have an agenda to alienate Tamils from Hindu Dharma.

The Aryan-Dravidian politics of Tamil Nadu

Before anything, it is important to learn about the narrative of Dravidian political thought. The political thought which was founded by E V Ramaswamy Naicker, also called Periyar. This man, about whom Nehru remarked that he was an “old and senile man who deserved a place in lunatic asylum rather than in public life.”

So this person was most instrumental in fuelling Dravidian separatism in a religious-cultural as well as political sense. This theory has following important elements:-

Backers of the narrative

This narrative vilifies Hindus, Hindu Dharma, Sanskrit and Vedic civilization. It makes sense that the natural enemies of Hindus are the most important backers of this narrative. Indeed, this narrative started with Robert Caldwell, a Christian missionary posted in Tamil Nadu. He wrote “A Comparative Grammar of the Dravidian or South-Indian family of languages”.
He identified south Bharatiya Brahmins with Indo-Europeans. Caldwell asserted that the other Tamil-speaking Hindus were distinct ethnically and religiously from Brahmins. These claims were intended “to develop a history which asserted that the indigenous Dravidians had been subdued and colonized by the Brahmanical Aryans”.
Initially, these ahistorical and racist claims, in the garb of linguistics, were resisted by Hindus of Tamil Nadu, but slow conditioning in coming decades continued the work of Caldwell. Now, these false claims are the “truths” of Tamil  Nadu politics. Many non-Tamils, specially Dalit activists, also place their belief in these claims.
I was surprised to find that in the last Lok Sabha, Mallikarjun Kharge, floor leader of Congress in Lok Sabha said that “You Aryans have come from outside, we are the original inhabitants whom you have oppressed for 5000 years!” Maybe, considering the proximity of Congress with Missionaries, I should not have been surprised.
Apart from Christian missionaries, the so called atheists in Dravidian parties and Communist parties also back this narrative. One can see the occasional Islamist there too. However, the biggest challenge is from Evangelists, who have practically high-jacked the Dravidian politics. The coming passages will make it amply clear how fake history is again being manufactured at Keezhadi, and it is being turned into another tool of propaganda.

The issue at Keezhadi

The issues at Keezhadi are also linked to this political narrative. It might help stating the political objectives of Keezhadi excavation first, so that we can put the actual events in perspective:-

The people behind Keezhadi controversy.

In today’s Tamil Nadu, spiritual descendants of Caldwell are trying to finish the work of Caldwell.  The chief actor in this drama is “Father” Gasper Raj. This Jesuit priest has been involved in a range of suspicious activities. He was associated with Radio Veritas, a Roman Catholic channel from Philippines. 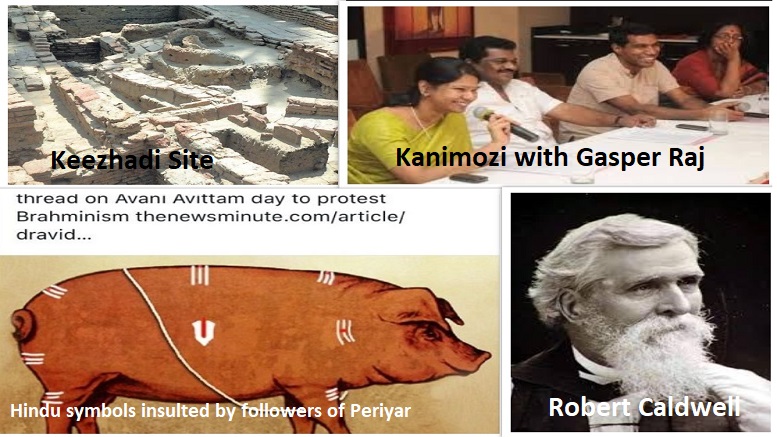 During that period he made close contacts with the terrorist organisation LTTE. James J. Tareco, Special Agent of FBI, in 2006, at the United States District Court, Eastern District of New York has accused Father Gasper Raj  for “procurement of military equipment, communication devices and other technology, fund raising and money laundering through front charitable organizations and other criminal activities such as conspiracy to bribe public officials and dealing in financial transactions with a designated Foreign Terrorist Organisation like LTTE”

Mr. Raj also runs an organisation named Tamil Maiyam, in which Kanimozhi, daughter of one of DMK’s founders and the late chief minister M Karunanidhi, is on the board of trustees. Thus he is directly linked to politics of DMK and was the link between DMK and LTTE. Indeed, Central Bureau of Investigation (CBI) sleuths raided the Tamil Maiyam office in 2010 while investigating the 2G scam. He has also been associated with Kudankulam protests and was instrumental in getting the Thoothukudi Sterlite Copper plant closed. Clearly, he is well funded and an extremely connected person.

Gasper Raj is the person who “supervises” the excavations at Keezhadi through a proxy in ASI, Amarnath Ramakrishna. Mr. Raj first visited Keezhadi on September 24, 2016, along with Kanimozhi Mathi, an advocate. According to a report in Frontline, “Amarnath Ramakrishna took them around and showed them the trenches”. On what authority they inspected the trenches, remains a mystery.

The fraud of Keezhadi exposed

Kanimozhi Mathi filed a public interest litigation (PIL) petition in the Madurai Bench of the Madras High Court with the prayer that the ASI should not be allowed to take the artifacts to Karnataka and that it should not be allowed to close the trenches dug at Keezhadi. In their interim order, the judges restrained the ASI from closing the trenches and shifting the artifacts. No harm done yet.

The ASI excavator for the site, Amarnath Ramakrishna, who first granted entry to Gasper Raj, was transferred according to the policy of ASI. Kanimozhi Mathi filed another petition challenging his transfer order. She expressed fear of the records misinterpreting Tamil history if the artifacts were documented by the ASI in his absence. It is to be noted that ASI Director General Rakesh Tewari stated that Amarnath Ramakrishna had submitted only “brief sketchy” reports about the first two years of excavations. Clearly, detailed reports would have contained records of artifacts.

Why these records are not being recorded and kept secret is a pertinent question. It has been alleged that Gasper Raj and his team  including K. Rajan of Tamil University and K. Sivanathan, deputy director Tamil Nadu Archaeology Department wanted the antiquities from Keezhadi to be kept secretly, so  that none should know what has been excavated from Keezhadi and only the politically motivated version of findings is released to the public.

It has been alleged that an IAS officer posted in Tamil Nadu Archaeology Department, who is also suspected to be a crypto-Christian is the brain behind these excavations and building of the narrative. He has been associated with FeTNA, a front organisation of LTTE based in North America. Accordingly, an MoU was signed by Madurai Kamraj University with Harvard Medical School in 2019, where the DNA and artifacts from 2500 BCE – 500 BCE were to be sent to Harvard for study. The question is: In 2017, they did not want artifacts to leave the district, and now they want to send them to Dr. David Reich of Harvard? It must be remembered that Reich has been instrumental in recent times to resurrect the fake theory of Aryan Invasion and efforts to prove that Bharatiyas living in south are racially different than Bharatiyas living in the north. So how is this supposed to be a neutral study?

Another angle that is part of the conspiracy is to prove that  Dravidians migrated to Keezhadi from Indus Sarasvati sites after “foreigner” Aryan migrants  chased them out of north Bharat. The inscription in ancient Tamil Brahmi found there from the site corroborate to Tamil of Sangam era. A few pots have allegedly similar forms as the as yet undeciphered Harappan script. Somehow, these are supposed to prove a migration to Keezhadi from Harappa. What would these ‘scholars’ say about Harappan artifacts found in Egypt and Greece? Maybe the Harappan migrated even there! Please note that the Brahmi script which was used from Afghanistan to Tamil Nadu, and has been extensively found to be used in Keezhadi,  is not supposed to indicate a similar culture with north Bharat.

Such is the hate for Bharatiya culture among the agenda peddlers that when Tamil Nadu State Minister for Tamil Language and Culture, K Pandiarajan termed the culture as Bharatham Civilization, he was bitterly criticized by the DMK and communists. They argued that no religious structures or artifacts have been found in Keezhadi, so it was a secular civilization free from Vedic influence. Maybe they did not realize that no archaeological proof of religious structures in Vedic civilization has been found till date! It is commonly accepted that temples did not exist in Vedic age. Further, even today only 10% of the area of Keezhadi has been excavated and further excavations may reveal other evidence.

The Keezhadi site has become a new front opened by Hinduphobes. The Breaking India forces are trying their best to somehow ‘prove’ the discarded theories of racial divide and ‘Aryan Invasion’. It is for the center, the ASI and wider Hindu society to stay alert and act against these conspiracies. The narrative of non-Hindu ancient Tamils has been promoted with vigor since last few decades by vested interests. Hindus must develop an intellectual critique of this narrative and couch it in simple terms to help its propagation. Annie Besant, theosophist and leader of the Bharatiya independence movement once remarked : “Hinduism is the soul of India. Without Hinduism there can be no India. Without Hinduism India has no future.” That was true a hundred years ago, as it is today. The attempted alienation of Tamils from other Hindus is a conspiracy to weaken and break Bharat, which should be dealt with urgently.