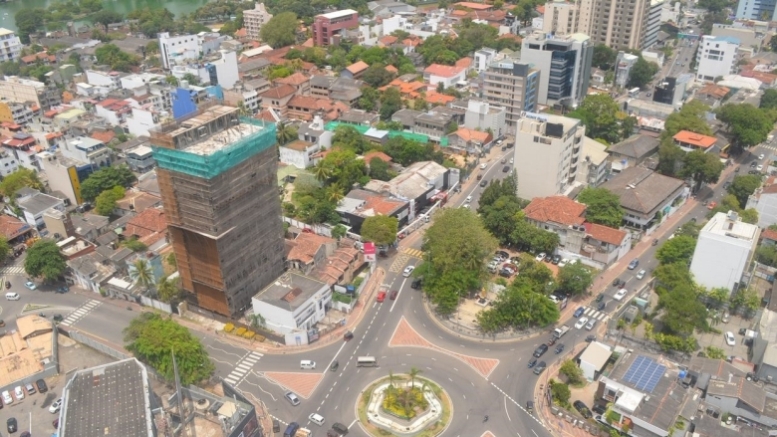 Bharat’s Prince Vijaya and his followers are said to have arrived in Sri Lanka on the day that Buddha attained Parinirvana. Prior to their arrival, the island was occupied by the aborigines. Prince Vijaya brought with him Bhartiya influence and culture around the 6th century BCE. A book that traces the history of Buddhism in Sri Lanka states, ‘Archaeologists have discovered chert and quartz implements and tools at various sites, believed to have been used by aborigines of Sri Lanka, and they indicate that these people were a primitive tribe who lived by hunting. These aborigines have not left traces of a strong political organization or an advanced culture. The present Veddas are believed to be their descendants.’

Vijaya was a Hindu Kshatriya who then married the aboriginal princess Kuveni and soon became the ruler of the country. He ruled from Tambappani and his ministers founded other settlements ‘like Anuraadhagaama, Upatissagaama, Ujjeni, Uruvelaa and Vijitapura.‘

Mutasiva succeeded his father Pandukaabhaya and he ruled for 60 years. His son Devaanampiya Tissa succeeded him in 250 BCE almost 236 years after the accession of Vijaya.

Buddhism arrived in Sri Lanka during the rule of Devaanampiya Tissa (250 to 210 BCE). Prior to this, Sri Lanka had multiple belief systems and practices. The pre-Buddhist period was characterized by a mixture of beliefs of aboriginal cults and Bhartiya influences brought in by the Hindu colonizers.

Emperor Ashoka’s son Mahinda converted to Buddhism like his father. He arrived at Sri Lanka during the reign of Devaanampiya Tissa and conveyed Emperor Ashoka’s message to him. It was Mahinda’s discourse that caused Tissa to embrace Buddhism along with his retinue of forty thousand men.

Tissa worked tirelessly to spread Buddhism and many of his subjects joined the Order and embraced Buddhism during his 40 year rule.

Foreign trade is extensive with petroleum, capital equipment, and motor vehicles being imported and garments, tea, coconut products, gems and jewellery being exported. The US is the largest single buyer of Sri Lanka’s export products and its other export markets include the Middle East, China, India, Russia, Germany, and the UK.

Both the private sector and the state engage in the production process making it a mixed economy.

Like many other countries of the East Asian region, Sri Lanka started out with a policy of import substitution where there were restrictions on imports and incentives for producing import substitutes. Such policies continued from 1951 to 1976. After 1977, liberalization policies were introduced to make it a free market economy. Export oriented policies were brought in during this phase. Trade liberalization was accompanied by an exchange rate regime.

However, the country’s trade deficit problems have persisted leading to foreign debts rising rapidly between the 1970s and 1999 when it was 59% of the GDP. After the civil war ended in 2009, the post-war economic boom led to foreign debt to GDP ratio falling to reach 30% in 2014. But this ratio once again has started rising after 2014 since most of its growth is driven by loans from abroad mainly China. In 2019, the foreign debt to GDP ratio was 42.6%. While until the 1990s, Sri Lanka could access concessionary loans, in the current scenario, after being upgraded to a middle income country, its access to such loans has gone down. Its current debt mechanism consists primarily of international sovereign bonds (ISBs) which involve shorter payback periods and higher interest rates.

The first colonizers to appear on the island were the Portuguese. This was followed by Dutch colonization and lastly the British. The British left the country in 1948.

In 1983, 64,000 people died in what are called the Black July riots. The accord to help end the civil war between Tamils and Sinhalese called the Indo-Sri-Lankan accord was signed in 1987.  In 1988, the Nationalist Janatha Vimukthi Peramuna (JVP) protested against the Sri Lanka-India agreement. In 1990, the second Eelam War broke out. The East Province was taken over by Sri Lankan Forces after heavy fighting. The LTTE continued to kill civilians in the Eastern province.

In 1994, President Kumaratunga again initiated peace talks with LTTE. In 1995, the third Eelam war broke out after a suicide squad attacked two naval vessels in Trincomalee killing 12 soldiers. In 1999, a female suicide bomber attacked a police station in Colombo targeting the head of the terrorism unit, Mohammad Nilabdeen.

A multi-pronged strategy was taken up and firm action was carried out. The government decided to focus on the weaknesses of LTTE which included a finite manpower base with only 12% of the citizens being Tamils. All of them did not actively support the LTTE but around 300,000 did. The organization had to rely on conscription rather than volunteers and its legitimacy internationally was also declining. Other flaws were its excessive dependence on international support and rigid command structure.

The government decided to shift the strategy from negotiating with LTTE to annihilating it. The multi-pronged interventions included increasing the government defence budget even at the cost of straining the fiscal resources, carrying out an international campaign to isolate the LTTE which led to it being banned in 32 countries, seeking assistance of countries in disrupting LTTE’s procurement of arms, and working towards stopping its funding. The US assisted with disrupting procurement of arms while Canada and the European Union helped address its funding base.

For internal support of citizens, the government had to invest in poverty reduction and development activities. This helped the Sri Lankan Army to recruit more soldiers in 2005, even before Rajapaksa was elected President. After Rajapaksa took over in 2005, political tensions heightened and in 2006, there were more political murders, abductions, and clashes between the government and LTTE more so after the LTTE ended the ceasefire and initiated the Eelam War IV. This led to the death of several LTTE cadres in 2007.

The increased strength of the Armed Forces proved useful in combating the LTTE during Eelam War IV. The government also created Civil Defence Forces of armed villagers and carried out search operations to identify and destroy terrorist cells. Well trained highly mobile groups infiltrated LTTE front lines and were able to provide real time intelligence. LTTE had a capable navy which is why destroying their naval systems was also needed. US provided coastal radars and help from the US and India helped to destroy LTTE’s naval resources.

The effective use of the multi-pronged strategy helped to destroy the insurgency and the civil war finally ended in 2009.

Bharat has been at the receiving end of a continuous onslaught of Islamist terrorism. The manner in which Sri Lanka handled terror from a group constituting 12% of its population could perhaps provide some lessons for Bharat. Sri-Lanka was able to isolate the terror group internationally and address its arms procurement and funding support through international cooperation. Lessons can be drawn also from the internal strategies of arming and empowering the villagers and flushing out terrorist cells.