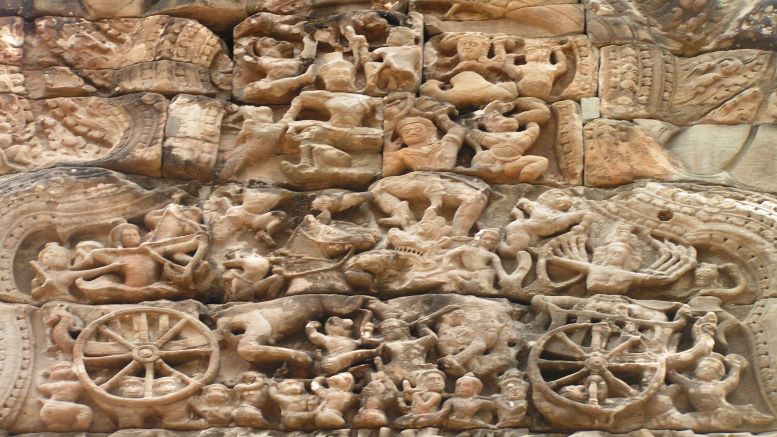 Wars have been a part of Bharat’s history since times immemorial. We are all familiar with the epic battles between good and evil, dharma and adharma, which took place during the Satya and Dwapar Yugas; namely Ramayana and Mahabharata.

By far, Mahabharata is considered to be the bloodiest and fiercest battle fought in the land of Bharat. However, an epic battle that pre-dates both these wars took place during the Vedic era. It wasn’t a battle merely for power or kingdom but one that defined the course of Bharat’s history and involved almost all the major dynasties of that time.

This war is epic in more ways than one, not just because of the Era it took place in but also because it spanned over several years during which many small battles were fought. This battle took place between Raja Sudas, descendent of Raja Bharat after whom our country is named, on the one side and a confederation of ten kings (Dasha meaning ten and Rajanya meaning kings) from whom the battle gets its name as Dasharajanya on the other side.

This battle finds mention in the hymns of Rigveda thereby gaining great significance. Rigveda is the oldest Vedic grantha and therefore a very significant source of information with respect to the Vedic age. Hymns 18, 19, 33, and 83 give information regarding this epic battle that spanned several years.

Background to the war: Sudas and his rivalry

Raja Sudas belonged to the Bharata clan (Puru-Trstu dynasty) and was a strong emperor who had established his supremacy in the Southeastern region of the Sapta-Sindhu River. He started expanding the kingdom inherited by him thereby alienating the neighboring kingdoms who waited for an opportunity to retaliate. This hostility laid the foundation for the Dasarajanya war. Some accounts also state that the rivalry between Maharishis Vishvamitra and Vashishta led to this war.

Whatever the reason, the fact remains that this war was fought in a series of battles, spread over a span of several years, between Sudas on the one side and a confederacy of ten dynasties or kings on the other side. The ten dynasties were Puru, Yadu, Turvasa, Adu, Druhyu, Alina, Paktha, Bhalanas, Siva, and Visanin.

As mentioned earlier, the war itself comprised several battles. Two of the most important battles were fought on the eastern and western borders of the Bharata kingdom. The first battle took place on the banks of the Parushni River. This was a fiercely fought battle in which both sides tried to inflict losses on the other. Sudas ultimately succeeded in prevailing over his enemies and defeated the confederacy.

As soon as this battle ended, Sudas had to fight the Ajas, Sigrus, and Yakshus on the banks of the Yamuna River. Sudas emerged victorious in this war too and these three were also forced to pay revenue to him. As per the Rigveda, 6666 people were killed in this battle. Having won this war, Sudas gave rich gifts to his Guru Vashishta. Interestingly the last battle was also fought on the banks of Parushni.

This battle spanned several generations with loyalties being divided. Sudas single-handedly tackled his opponents to ultimately emerge victorious. This was more than just a war, it was politics at play. The twists and turns that preceded the war and that took place during the course of the war give us an idea of how politics operated.

As per legends Vishvamitra was earlier the Guru of Sudas but he was replaced by Vashishta later. Now the rivalry between the two Maharishis predated Sudas and the increasing closeness of Vashishta to the king only added fuel to Vishvamitra’s ego. The Maharishi is then said to have encouraged Sudas’ enemies to form a confederacy to defeat the former. Here’s another interesting fact: While Abhyavartin Chayamana of the Pruthu dynasty was an ally of the Bharatas, his descendent Kavi Chayamana fought against the Bharatas; that’s how divided the loyalties were.

This is a very significant event that occurred in the Vedic Age and therefore assumes the status of an Epic on par with Ramayana and Mahabharata. Itihasa has always been a part of Bharat’s scriptures but leftist historians have ignored it because they did not find it palatable that ancient Bharata could have kingdoms. Also, because Itihasa was a part of the scriptures they tended to be dismissed as ‘fiction’, or their meaning was taken out of context to present them like the West wanted it to be shown.

Many dynasties moved out of Bharat beyond the North-Western borders towards Persia (Iran) after the war. All these facts would not suit the “Aryan Invasion Theory” propagated by Western historians and continued by their Indian slave historians.

The significance of this war goes beyond the battlefield. It was not just a war but a consolidation of power by the Puru-Bharata dynasty in the North-Central region of Bharat. This region is very significant because many major dynasties had their capital here but more importantly, the Kuru dynasty belonged here and this was the site of Mahabharata. It shows how Sudas established his supremacy and it would be a great injustice to him if we ignore this tale that is truly epic in all sense of the term.