Winston Churchill’s reputation as “an unashamed imperialist and at a time when imperialism is on its last legs”, as Sardar Patel described him, remains unblemished to date for most Indians. Less known is a sinister design by Britain’s war-time Prime Minister to undermine Bharat forever. 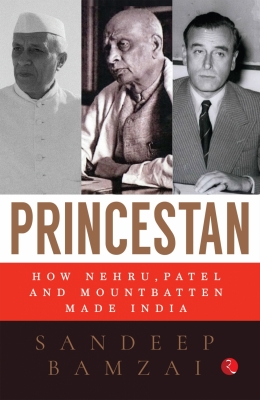 CEO and Editor-in-Chief of the Indo-Asian News Service, Bamzai tells how, even when the writing on the wall was clear that Britain had to leave Bharat, Churchill sedulously worked towards maintaining British presence and influence in Bharat.

When he met Lord Wavell in August 1945, Churchill advised him to ‘keep a bit of India’, writes Bamzai, who says the British Prime Minister had delivered an unequivocal message to the Viceroy in Bharat.

The presence in Bharat that Churchill sought could have been related to being in close proximity to British interests in Asia — Britain under Churchill had evidently not lost its imperialist ardour even though the balance of power had by then shifted from Britain to the US.

Hitherto, archival matter has referred to plans for three divisions — Bharat, Pakistan and princely Bharat. It was a plan even Churchill’s successor Clement Attlee had not dismissed.

Bamzai has now uncorked another dimension to Britain’s vile plan under Churchill, working in tandem with Bharatiya princes determined not to be a part of republican Bharat.

The Conservative Party was vanquished at the end of the Second World War. In a parting message to Lord Wavell at the end of his trip back home on 31 August 1945, Winston Churchill had told him unequivocally, ‘Keep a bit of India.’ The echoes of that comment made by Churchill while escorting Wavell out and closing the lift door were to reverberate for a much longer time. Churchill himself was thrown out by the British and replaced by Attlee. In the spring of the same year, Churchill, then in power, had spoken with Wavell and told him of dividing India into Pakistan, Hindustan and Princestan. Leopold Amery, secretary of state in Churchill’s War Cabinet, had said something similar to Wavell’s predecessor, Lord Linlithgow, during the Cripps negotiations of 1942: ‘Keep an eye for space around Delhi.’ But Linlithgow ignored this comment for he believed the British could hold India for thirty more years — he, in fact, said this while demitting office on 19th October 1943 in favour of Wavell who, like Churchill, was anti-Congress. All of them got it completely wrong, for Attlee sent Mountbatten to India , replacing Wavell, and the Earl of Burma threw himself headlong into the task and ensured British withdrawal from the subcontinent by 15 August 1947 instead of the designated 30 June 1948. And the princes — well, they were swallowed up by Nehru, Mountbatten and Patel in different stages.

But ‘keep a bit of India’ remained a theme with the Monarchists and hope lingered as princes, their Prime Ministers and Dewans, under the bidding of the British Political Department in frontline states of Kashmir, Hyderabad, Bhopal, Jodhpur and Travancore played the procrastinating game flirting with the idea of independence and even Princestan. Interestingly, the US State Department was also fishing in these troubled waters. Keen on the mineral resources of some of the states, Wavell, in a memo to Lord Pethick-Lawrence, dated 26 February 1947, wrote,

Thomas E Weill, second secretary US Embassy New Delhi, came to see my deputy Private Secretary soon after HMG’s statements were made. He enquired about the government to which HMG would hand over power in the absence of an agreed Constitution framed by the Constituent Assembly. He asked whether it was the intention of HMG to make treaties with the Indian princes if there was no all India Constitution. He asked particularly with a slightly meaningful look about Travancore and mentioned that Kalat may have oil.

(Excerpts from ‘PRINCESTAN: How Nehru, Patel and Mountbatten Made India’, printed with permission from the publishers, Rupa Publications)