Cheraman Perumal – A Story Of Lies 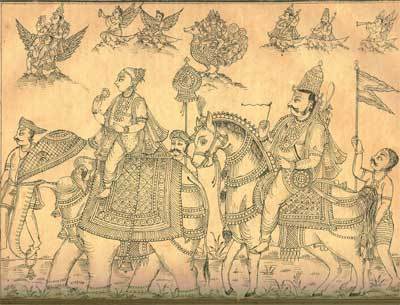 The Cheraman Juma Masjid at Kodungallur, glorified by the moslems of Kerala as the most ancient mosque of the world barring Mecca is claimed to be the built by the last of the early Chera Kings, Cheraman Perumal, who is considered as the first follower of Islam by the same sect of people.

Recently, this ‘history’ which started making rounds in the late 20th century after the mosque was renovated in 1974, took a new turn when the former president Dr. A. P. J. Abdul Kalam visited this mosque in 2005 and Prime minister Sri. Narendra Modi gifted a gold plated replica of the mosque to the Saudi King Salman bin Abdulaziz Al Saud in 2016. After these incidents, a Malayalam movie with Mammootty starring as Cheraman was also announced in 2014 though no news about the movie’s commencement came after that. Let us have a detailed analysis over this issue.

The Muslim records claim that the last Cheraman Perumal saw the moon split in the sky from his balcony and consulted about this incident with his astrologers. Later when a group of merchants came to his court, he came to know that Prophet Muhammad was behind this incident and set sail to Mecca after dividing his kingdom and making many of his relatives as the rulers of different parts. He met Muhammad at Mecca and converted to Islam after which he fell ill and died on his way back at Salalah in Oman, where he was buried and now a dargah has been built in the name of Tajuddin.

Interestingly, if we go a few kilometers away from the mosque we find a very ancient and huge Shiva temple with less number of visitors. The area of that temple is known as Thiruvanchikkulam and is the only temple in Kerala to be sung by the Naayanaars and features in the list of 1008 Shiva temples which are worshipped by the Naayanaars. It is from this place that Sundarar Murthi Nayanar reached Kailasa after singing about Shiva residing in this temple by the thirupadigam “Thaanenai munpadaithaan” of Thevaaram and was accompanied by the Cheraman Perumal who is considered to be the last of the Chera Kings to have ruled the entire Chera kingdom before the division.

Various scriptures like that of Sekkizhaar and inscriptions speak about the friendship which existed between Cheraman and Sundarar after their meeting in Thiruvarur. The Cheraman, who is also considered to be one of the 63 Naayanaars, accompanied Sundarar to Pandya Kingdom and worshipped Shiva at many ancient temples. His famous compositions are Ponvannatthandaadi, Thiruvaroor Mummanikkovai and Thirukailaaya Gnaanaulaa. There are several ancient murals in this temple depicting Cheraman going to Kailasa with his friend Sundarar and his army men paying homage to him attaining moksha. It was after this sudden departure of him to Kailasa that the Chera kingdom was split, until the later Cheras belonging to the Kulasekara dynasty united it again a century later.

Several liberals claim that the Chera King who left for Kailasa from Thiruvanchikkulam with Sundarar was Rajasekhara Varma of the Kulasekara dynasty. But this claim seems to completely false as Rajasekhara Varma lived in early 9th century, atleast a century after Sundarar’s period, and the King was succeeded by his son Sthanu Ravi Varma contradicting the fact that the Chera Kingdom was divided after Cheraman’s departure to Kailasa. So this establishes the fact that it was the last King of the early Chera dynasty who accompanied Sundarar.

Coming back to the claim of moslems about the time period, Sundarar lived in 8th century which dates well after Muhammad’s period and the presence of a Chera King in this time contradicts their claim of Tajuddin being the last King of the early Cheras who lived in the time of Muhammad.

The Theyyum song which is claimed by the moslems to be speaking about Cheraman’s journey to Mecca speaks about Samoothiri after the split whereas Samoothiri King’s lineage begin only in 12th century after the destruction of Mahodayapuram, the capital of Cheras by the Cholas. Going by this, if we consider the last king of the Kulasekara dynasty as the one going to Mecca, it dates 600 years after Muhammad’s demise making it impossible for the occurrence of the meeting between Chera and Muhammad.

Thus this shows that a random mosque existing in a quiet place at South Bharat and a forgotten Chera King have been used by the Muslim historians to hide the bloodbath which occurred in the name of spreading islam in Bharatvarsha.

Editor’s Note:  Those interested in further reading on the Cheraman Perumal legend can refer to this detailed blogpost by @TrueIndology – https://trueindology.wordpress.com/2016/04/10/examining-the-historicity-of-cheraman-legend/