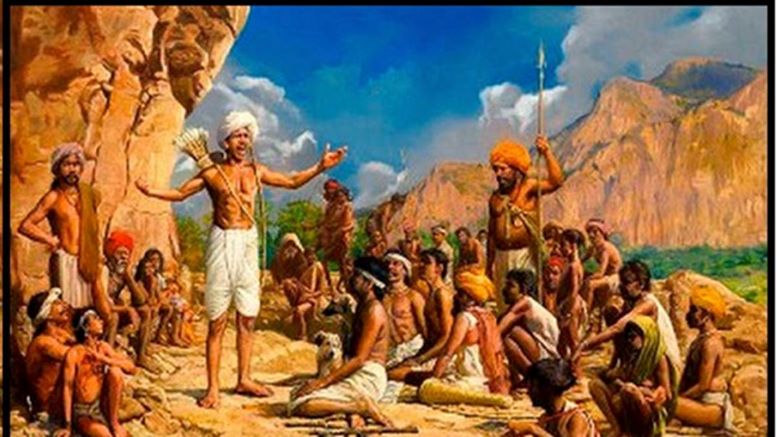 A Flute player and painter, Birsa Munda was born in the vanvasi [scheduled tribe] village of Jharkhand named Unnihat on 15th November, 1875.  Later, young Birsa was taken to Chaibasa by his father for seeking admission to the German mission school there. However, when he reached there he found that he would not be given admission in the school as he was still a Hindu and would be admitted only if he adopted Christianity.

Realising that he would remain deprived of gaining education from the school if they did not become Christians and with the intense desire of providing Birsa an opportunity to learn, his family succumbed to adopt Christianity. Giving him admission in the school, the padre of the Church within the premise changed his name to Birsa David.

It was after the completion of education, as Birsa was leading the simple life of a common man that he came into the contact of then famous vaishnav saint, Shri Anand Pandey. His proximity to the saint reawakened the inborn Hindu sanskaras [virtues] in Birsa there by paving the way for him to come back to the fold of Hindu Dharma.

As he went ahead with his studying of Hindu scriptures like Ramayana, Mahabharat and Geeta, his mind began to turn towards leading the life of an austere hermit. And, at last, he set out for living far away from people, in isolation — only to come back after four years, having undergone deep penance. Now he was before the people again, but transformed into a Hindu Mahatma attired with yellow dhoti, wooden khadau [foot wears] and vermilion on the forehead.

Inspired by him, the fellow vanvasis— earlier misguided by Christian missionaries, and distracted from Hinduism—yet again initiated worshipping basil and cow, reading Ramayana and living the life in virtues of good conduct. This transformation among the people was taken by missionaries as threat to themselves and their ‘mission’. They conspired with British Commissioner of Ranchi and got Birsa arrested under false allegations. Birsa was sent to the Hajaribagh jail. The incident incensed entire vanvasi people; for them Birsa had grown to be a God figure. But before the circumstances around, they were helpless.

On 30th November, 1887 Birsa was freed from jail. Spending two years in the jail made Birsa realise the difference between foreign and what is called ‘swadeshi’. Firm with the resolve of working for the freedom of the country, he reached Chalkad to initiate meetings of vanvasis from place to place, organising them into cadre based high ideals of discipline, dedication and suffering for the achievement of the goal.

Imparting them the training of warfare, he called upon them to be ready for the impending armed revolution. And on 24th December, 1899 the day came when vanvasis set out with the arms like bows-arrows and such other from their homes, giving the call of revolution. Soon places around and between Ranchi to Chaibasa fell captive in the hands of vanvasis. Wherever British officers and missionaries working in tandem with them were found, they had to face the fury of arrows from all sides.

Soon the police stations, missionaries’ installations were engulfed in fire. Consequently, the affected regions had to be handed over to the Army.  The riots turned into a raging war. Before the modernised weapons like rifles and bombs the British Army possessed, vanvasi freedom fighters could not survive long in the battle.

Hundreds of vanvasis were martyred; hundreds others were imprisoned at the instance of missionaries. Also the villages were ransacked by the soldiers commanded by brute British officers. Birsa was especially held shackled and put into the Ranchi jail. Suffering barbarous atrocities, he breathed his last on 9th June, 1900. It is believed that it was the Jail authorities that had poisoned Birsa.