Bhima Vairagya: The Death of Ghatotkacha 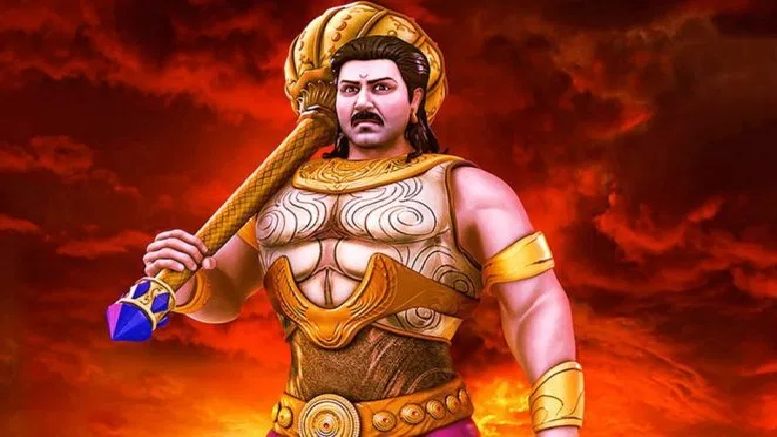 This is continuation of the series of posts highlighting the ten guNas that Bhimasena displays in the Mahabharata. The ten gunas have been explained by Sri Madhwacharya in his Mahabharata Tatparya Nirnaya (MBTN) as follows:

In this post, let us look at an incident which clearly highlights the extreme vairagya that Bhima possessed. The main lakshana — or attribute — of vairagya — is non-attachment. And Bhima possessed this quality in abundance. Being an avatara of Mukhyaprana, his only attachment was to paramatma Sri Krishna.

Bhima was fully aware that every incident that happened was due to the wishes of the lord — and nothing happened that HE didn’t wish. Hence, his only role was to aid in the task of eliminating the burden of the earth — भू भार हरण — and nothing else. His brothers, his wives, children and family were all incidental, and had to be engaged and enjoyed only to the extent of fulfilling the task given by Krishna. Thus, he truly was a virakta— a detached soul.

The ferocity of Ghatotkacha

Ghatotkacha had always been a faithful son of the Pandavas. Born due to the union of Bhima and Hidimbaa, he was actually the eldest amongst the sons of the Pandavas. As per the promise given by his mother, at the time of his birth, Ghatotkacha was always present — due to his miraculous prowess by virtue of being a rakshasa — whenever the Pandavas called for him. He served the Pandavas on numerous occasions during the vana parva, especially during the tough journeys through the Himalayas.

Naturally, Ghatotkacha joined the war and fought on the side of the Pandavas. On the 14th day of the war, as evening approached, Ghatotkacha entered into a fierce battle. Just a while earlier, Jayadratha, the saindhava, had been killed by Arjuna with the aid of Sri Krishna. Both the camps decided to continue the war into the evening and night (the normal rule was to stop the war at sunset).

Soon, Ghatotkacha started inflicting heavy damage to the Kauravas. Being a rakshasa, he possessed immense strength, ferocious weapons, the mastery of magic and great valour. All of this made him a very powerful warrior. He first target was Ashwathama. He fought such a valiant battle that Ashwathama, at one point, fell unconscious due to the pain from Ghatotkacha’s weapons!

He then fought Karna, Duryodhana, Drona and many other great warriors and caused a lot of distress among them. Next, Ghatotkacha killed two mighty rakshasas known as Alambala and Alayudha. In fact, Ghatotkacha cut off both their heads and threw it at Duryodhana. This move put Duryodhana and the entire Kaurava camp in great fear. They started to worry that Ghatotkacha himself may finish off the war! Till then, their main worry was to survive Bhima and Arjuna. However, they now wondered if they will even survive to face the two Pandavas.

The Kauravas then decided that Ghatotkacha had to be killed at any cost. They approached and made a request to Karna to use his unique ‘shakti-astra’ and kill the rakshasa. As is well known, the ‘shakti’ was given by Indra to Karna and would work only once to kill anyone Karna desired. However, the astra would return back as soon as it had its first victim. It was Karna’s desire throughout the war to use it against Arjuna at a suitable occasion.

But the Kauravas pleaded with Karna to save them from Ghatotkacha instead.

Seeing the ferocious maya, all the Kurus pleaded with Karna thus — “O Karna! quickly destroy this rakshasa with the shakti. He will (otherwise) not spare the sons of Dhritharashtra”

So mighty was Ghatotkacha’s valour at that time that the Kauravas started feeling that even Bhima and Arjuna cannot do any greater damage than what the rakshasa was doing at that time.

Bhima and Partha cannot do anything greater. Kill this rakshasa who is burning at night. Only he who can relieve us from this ferocious battle can fight with Arjuna in the future!

At this point, Karna became convinced that the immediate danger of Ghatotkacha had to be dealt with. The fact that even Karna himself was being pained by him added to the decision. Karna picked up the shining shakti and hurled it at the massive figure of Ghatotkacha in the sky.

The shakti pierced Ghatotkacha’s heart and he fell down. Even while collapsing, Ghatotkacha used his advantage as a rakshasa, grew into a humongous shape and chose a spot where there were numerous Kaurava soldiers and fell down. In the process, thousands of Kaurava warriors got crushed. Even in the final moment of death, Ghatotkacha thus helped thePpandavas.

Seeing Ghatotkacha die this way, Sri Krishna started a wild celebration. He started dancing on his chariot and hugged Arjuna as if in great joy. Arjuna, on the other hand, was extremely depressed and questioned Sri Krishna on his surprising behavior. Sri Krishna stated that the joy was because Karna no longer had the shakti and hence Arjuna was safe.

At the same time, Yudhisthira went into depression. He was very attached to Ghatotkacha and the loss of his nephew put him into great grief. He became inconsolable. His grief turned into anger against Karna. The rest of the Pandavas started to worry that he may try to attack the superior Karna, which may lead to unwanted consequences. Sensing the danger from Yudhishthira’s uncontrolled grief, Sri Veda Vyasa appeared there and consoled him with pacifying words about how the incident was meant to save Arjuna.

Then Yudhisthira started boiling with anger, and grief, at Karna. At that moment, the lord of all, Sri Krishna dvaipayana, appeared there and told him (of the real reasons).

The vairagya of Bhima

In the midst of all this, Bhima maintained great composure and showed no signs of grief at all. He was truly the personification of vairagya. His detachment to worldly relations becomes even more evident by recalling that Ghatotkacha was actually his own son — his own blood!! Yet it was Arjuna and Yudhisthira who were more perturbed by the death of their nephew. The man who had just lost his elder son was unmoved.

The main reason for this state of composure of Bhima was his supreme knowledge of the situation. He knew fully well that it was Sri Krishna’s wish that Ghatotkacha must be sacrificed and Arjuna saved. Also, in the larger scheme of the Mahabharata war, it was inevitable that most had to die and only a handful survivors emerge. Thus, Ghatotkacha’s death was predestined.

The combination of true knowledge and sense of duty and service towards Sri Krishna meant Bhima had extra ordinary detachment — vairagya. Only a person with the highest levels of vairagya can participate in the bloodiest war of all time and emerge as the destroyer-in-chief! (Bhima single-handedly destroyed 6 akshauhinis of the Kauravas — out of the total of 11)

One single shloka from the Mahabharata is enough to guage the mindset and condition of Bhima. In the midst of grieving, Yudhisthira notices that the Kaurava army is trying to take advantage of the situation and attacking them. He needed to grieve; yet he needed to ensure protection for his people. He therefore turns to the only composed warrior out there — Bhima. He asks his younger brother to hold the enemies while he is caught in the grief of losing the son of that very brother of his!!!

O mahabahu! Please stop the army of the Dhaarthrashtras! I am engulfed by a great delusion due to the death of Hidimba’s son.

Here we have a situation where the father of the person who has just died is being asked by the king to wage a war and prevent the enemies while he can recover from the loss of that death!

Needless to say, Bhima immediately obliged his elder brother and launched himself on the Kurus.

Thus, we see how Bhima, the parama bhagavata, possessed extra ordinary vairagya which enabled him to focus on his dharma — even at times of great personal loss.

Bhima was truly a virakta-murthy!

Dealing with the complexities of Karma and Dharma