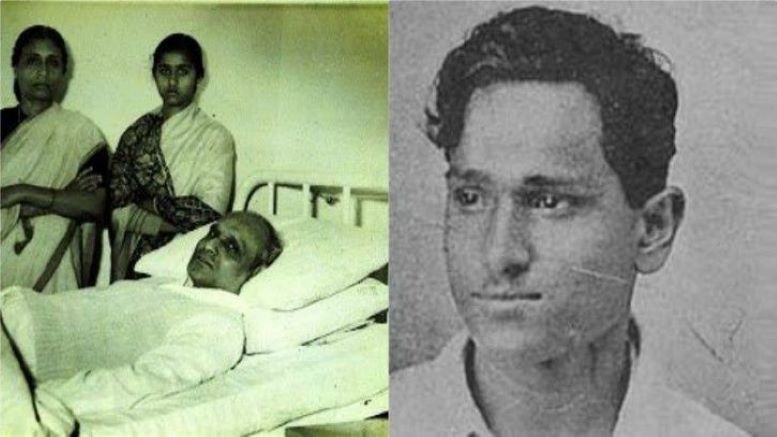 If a nation is known by how it treats its heroes then on that count Bharat has repeatedly failed several of its heroes. Batukeshwar Dutt is a revolutionary freedom fighter who exemplifies how Bharat has not just forgotten its heroes but also how it has shabbily treated them post-independence.

To date, the political and historical space has been reserved for Gandhi and Nehru (& subsequently his family members) to the detriment of those freedom fighters who either laid down their lives for the country or bore unspeakable horrors in a bid to free her from the clutches of the British but were virtually unrecognized in independent Bharat.

The early life of Batukeshwar Dutt

Batukeshwar Dutt was the son of Goshtha Bihari Dutt and Kamini Devi who was born on 18 November 1910 at Oari Village located in Purba Bardhaman district of present-day West Bengal.

He completed his education in Uttar Pradesh’s Kanpur from Theosophical High School and Prithvinath Chak High School. It was here that he came in touch with his revolutionary friends. He was also known as BK, Battu, and Mohan.

An incident that left a deep impact on Dutt was one where a Bharatiya child was severely beaten by a British on Kanpur’s Mall Road because he had dared to venture onto a road where the entry of Bharatiyas was banned.

Around 1925, Dutt moved to Kolkata (then Calcutta) where he took part in the Workers and Peasant Party’s activities. Once HSRA, which had disintegrated after the Kakori conspiracy, began regrouping under Chandrasekhar Azad and Bhagat Singh, Dutt returned to Kanpur to participate in HSRA’s activities. He mastered the art of making bombs at various places where secret meetings of HSRA would take place.

It was Dutt who made the bombs that were thrown by him and Singh at Delhi’s Central Legislative Assembly on 8 April 1929 to, in their words, make the deaf hear. They were protesting the passing of legislation that allowed the police to take anyone into custody without a warrant or proof and also the British brutality that led to the death of Shri Lala Lajpat Rai.

Dutt’s lawyer Asaf Ali informed that Dutt got himself arrested even though he didn’t actually throw the bomb in order to stay with Singh. The intention of the revolutionaries was to inspire younger generations and hence they gladly accepted imprisonment.

Dutt along with Singh initiated a hunger strike while serving a jail term at Lahore Central Jail to protest against the despicable conditions of Bharatiya prisoners. Dutt was later sent to the Andaman Cellular Jail which was popularly known as Kala Pani.

He had contracted the dreaded TB (tuberculosis) while serving his jail sentence. That, however, didn’t dampen his revolutionary spirit or the will to serve the country and set her free. Therefore, even after his release in 1942, he earned another jail term the same year for participating in the Quit India movement.

It is, however, the treatment meted out to this great son of the soil by independent Bharat that is both heart-breaking and deplorable. Far from being celebrated in the country for whose freedom Dutt gave up his prime years, he led a life in oblivion in post-independent Bharat making ends meet with great difficulty for the most part of his life.

His attempt to seek government help for gaining employment thereby securing a steady income turned out to be futile. Dutt had to resort to doing odd jobs to fend for his family in addition to battling TB. He dabbled in various businesses including working as a cigarette company agent and selling bread and biscuits among other odd jobs for his subsistence.

What can be more unfortunate than a revolutionary freedom fighter having to show identity proof? But the commissioner in Patna whom Dutt had approached for a permit to start a bus service, wanted proof of identity from the latter.

Dutt not only had to struggle to make a living but when he fell ill in 1964 after a prolonged battle with TB, he couldn’t even find a hospital bed in Patna. Freedom fighter Chamanlal Azad, who was Dutt’s friend, was extremely agitated at the plight of Dutt and is said to have shot an angry letter to a newspaper editor.

“God has made a mistake by producing a valiant man like Batukeshwar Dutt in India. He is struggling to stay alive in the very country for whose freedom he sacrificed his whole life” Azad said in his letter.

Following this, the Punjab government made an offer to get Dutt treated free of cost in Delhi and Chandigarh in addition to providing a sum of Rs.1000 as a medical aid. Unfortunately, the Bihar government didn’t allow him to go to Delhi until it was too late.

When Dutt arrived at Delhi’s Safdarjung Hospital on 22 November 1964, his health had deteriorated. He was diagnosed with cancer at AIIMS where he had been shifted in December that year.

He breathed his last on 20 July 1965 and in keeping with his last wish, he was cremated at Hussainiwala where his revolutionary friends Shaheeds Bhagat Singh, Rajguru, and Sukhdev had been cremated. He is survived by his daughter Bharti Bagchi.

Thus died a great revolutionary uncelebrated and unrecognized even in death! A March 2021 ground report by Zee News reflects the continued apathy of independent Bharat towards its heroes.

Sadly, the board with Dutt’s image erected in the village where Dutt was born lies covered in dust. The house where he was born was lying in ruins until 2015 when it was repaired almost 5 decades after the revolutionary’s death.

The place where revolutionaries including BK Dutt and Bhagat Singh spent 18 days planning the Central Legislative attack is in shambles today reflecting the callous attitude of Bharatiyas towards their heroes – those heroes who deserve honor and dignity at least in death.