Bengal did not take an active part in the 1857 revolt, and during the period of the East India Company, it saw the rise of a large urban educated, middle class. This in turn led to a rising tide of Bharatiya nationalism, in the ending of the 19th century.  The partition of Bengal in 1905, ignited a more revolutionary, violent movement, that believed in the overthrow of the British by force, in a sense inspired by Bal Gangadhar Tilak.  Both Jugantar and Anushilan Samiti were secret societies, whose members were primarily youth and students. And one of the most prominent of those revolutionaries was Jatindranath Mukherjee, also known as Bagha Jatin, after he killed a tiger with his bare hands, near a village. 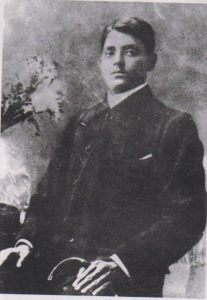 Kushtia now in Bangladesh, the ancestral land of Rabindranath Tagore, was where Jatin was born on December 8, 1879 to Sharat Shashi and Umeschandra Mukherjee. Losing his father when he was just five years, Jatin grew up under the care of his mother, a gifted poet herself. Growing up to be a strapping young lad, Jatin was known for his physical strength, as well-being a gifted actor, especially in playing roles of Pauranic characters like Prahlad, Hanuman, Dhruva. Driven by a nationalist fervor, he used the dramas to spread the message of nationalism, and urged the singing bards to sing more patriotic songs.

Finishing his studies from Krishnanagar, Jatin joined the Kolkata Central College (now named after Khudiram Bose) to study Fine Arts in 1895. It was here he came in touch with Swami Vivekananda, who influenced his ideology, and he became one of Swamiji’s most ardent devotees. He was one among the youth volunteers whom Swamiji desired with “muscles of iron and nerves of steel”, and played an active role in assisting the poor and needy, especially during floods and famines. He actively  assisted Bhagini Nivedita, in her service missions and also learnt wrestling.  Fed up with the English education system, he began to write regularly, showcasing the British exploitation of Bharat and the need to have a Bharatiya National Army.

In 1900, he was married to Indubala Banerjee of Kumarkhali, and had 4 children. However when he lost his elder son Atindra, he went on a pilgrimage to Haridwar, where he found inner peace. Returning to his native village, he had that encounter with the tiger, when searching for a notorious man-eating leopard. He managed to kill the tiger with a Khukri, but not before being severely wounded himself.  The surgeon Lt Col Suresh Sarbadhikari, who treated him, and removed the tiger nails from his body, published an article, impressed by his bravery.  And that is when he got the title of ” Bagha” Jatin, that also became his more popular name.

Jatin played a vital role in setting up one of the branches of Anushilan Samiti,  at Dhaka, where he met Aurobindo in 1903,and decided to collaborate with him.  During a procession of the Prince of Wales in Kolkata in 1905, Jatin assaulted a group of English soldiers, who were misbehaving with Bharatiya ladies, drawing attention of the higher-ups.

Along with Barindra Ghosh, one of the founding members of Jugantar, Jatin set up a bomb factory near Deoghar (now in Jharkhand), while Barindra did the same at Maniktala.  He simultaneously developed a loose network of autonomous sleeper cells, which organized relief missions, welfare activities, as well as religious congregations like the Kumbh Mela, and used to celebrate the birth anniversaries of Ramakrishna Paramahansa and Swami Vivekananda annually. By now he was fully under British surveillance, who saw him as one of the biggest threats.

Soon he began to spread his activities, setting up branches of the Anushilan Samiti in Darjeeling and Siliguri, apart from being noted for his regular fisticuffs with the British officers.  One such clash led to legal proceedings, and when warned by the Magistrate to behave, Jatin shot back, stating he would not hesitate to do so again for the rights of his fellow Bharatiyas. When the British cracked down on the conspirators of the Alipore Bomb case, Jatin was one of those who managed to get away. He soon filled up the leadership vaccum, taking over the Jugantar Party and began to set up it’s units all over Bengal, as well as in Odisha and Eastern UP.

When the British Government struck back with a series of repressive measures, to suppress the revolutionaries, Jatin hit back with a series of actions, most conducted in top secrecy. Assassination attempts were made on the Lt. Governor of Bengal in 1908, bank robberies carried out to raise funds.  Finally on January 27, 1910, Jatin was arrested in connection with the assassination of prosecutor Ashutosh Biswas, and DSP Samsul Alam, but released. Only to be arrested again in connection with the Howrah-Sibpur conspiracy case, along with 46 others on charges of waging war against the Emperor and instigating Bharatiya soldiers in the army.  However the case failed due to lack of proper evidence and in the meantime, he also made good contacts with other fellow revolutionaries in prison.

On release from prison in 1911, Jatin temporarily suspended his revolutionary activities for some time. Having lost his job, he left Kolkata and started doing contracts on the Jessore-Jhenaidah railway line, that gave him ample time to move around and revitalize the units in Bengal.  Going on a pilgrimage to Haridwar and Vrindavan, he got in touch with Swami Niralamba, an ex revolutionary Jatindranath Banerjee, who took up Sanyas.  He soon coordinated with Rash Behari Bose, and Lala Hardayal in spreading the revolutionary work in the Northern part of Bharat. On his return to Kolkata,he reorganized Jugantar, continuing his relief activities, especially during the devastating Damodar river floods, in Midnapore, Burdwan districts.  Rash Behari too joined him around that time, calling him a real leader of men, and soon began to plan a 1857 kind of revolt, negotiation with disaffected Bharatiya army officers at Fort William, the nerve center of the British Indian army then.

Jatin’s fame had spread abroad too, and expat Bharatiya revolutionaries in US, Europe were inspired by him.

Lala Hardayal founded Ghadr, which involved the Sikhs on a large-scale in the revolt. When World War I, broke out, in September 1914, the Berlin committee was formed by Virendranath Chattopdhyaya that included members of the Ghadr party too.  It’s aim was to foment an 1857 style uprising, in Bharat, as it felt that with the British engaged in the war, it would be the right time to strike.  The German Government supported the mission with arms, ammunition and funds, while a large number of Ghadr party members too began to leave for Bharat.  It was Jatin who carried out the entire mission, leading the Jugantar, while Rash Behari began to execute the plan in UP and Punjab. Called as the German plot or Hindu-German conspiracy, Jatin began to raise funds organizing a series of armed robberies, using taxicabs. With police surveillance intensifying, Jugantar members urged Jatin to shift to a safer spot like Balasore on the Odisha coast, which was also the entry point for German arms into Bharat.

Jatin sent one of his close associates Naren Bhattacharya, who would later become more well-known as M.N.Roy, the founder of the Communist party in Bharat, to make a deal with the Germans regarding financial aid and arms. However a group of  Czech revolutionaries, who had infiltrated the network, uncovered Jatin’s plans, and soon the information was leaked out to the higher authorities in Britian and US.  The British sealed off the Eastern coast of Bharat from Chittagong to Gopalpur, as well as the entire Gangetic delta. The British also raided Harry and Sons, which Jatin had set up as a front, for smuggling in the arms, and soon traced his location to Kaptipada village, where he was hiding with his associates Chittapriya Ray Chaudhari and Manoranjan Sengupta.

Jatin was advised to leave his hideout, however his insistence on taking two other associates Niren and Jatish, caused a delay, giving enough time for the police, to reach the area, along with an army unit from Chandbali, cutting off all escape routes. For two days, Jatin along with his companions fled through the thick forests of Mayurbhanj, before reaching Balasore station.  However tempted by the reward for capture of the five “bandits” announced by the British, the local villagers, informed the police.  Finally on September 9, 1915, Jatin and his associates took up position in a small trench at Chashakhand near Balasore. Inspite of Chittapriya, asking him to flee, Jatin refused to abandon his companions and fought back against the British. In an intense gunfight that lasted for 75 minutes, between the five revolutionaries armed with Mauser pistols, and fully armed police contingent, they still managed to inflict a large number of casualties on the British side. Chittapriya died in the firing, Jatin and Jatish were severely wounded, while Manoranjan and Niren ran out of ammunition and were captured.

September 10, 1915- The man who had fought a tiger bare handed, led a long revolution against the British, passed away due to the bullet wounds.  Bagha Jatin was no more, the tiger of Bengal had fallen silent.  Such a hero, that even Charles Tegart, the British intelligence chief who had set out to capture him, said “Though I had to do my duty, I have a great admiration for him. He died in an open fight”.  Tegart also claimed that had Jatin Da been an Englishman, his statue would have been next to Nelson’s at Trafalgar Square.

On his Punya Thithi, lets remember this great son of Bharat –  Jatindranath Mukherjee.

This article first appeared here and has been presented here with author’s consent.