The history of Bharat’s shipping and maritime activities goes back probably to the early times of the Rigveda. The Jatakas, the Greek and Roman authors, the early Tamil poems as well as a host of archaeological discoveries in Bharat and abroad – all go to prove that long before the birth of Christ, the Hindus had acquired a fair knowledge of the art of navigation and that they plied their boats not only on the inland rivers but also on the high seas.

There were ports and harbours all along the coast-line, such as Tamralipti, Kaviri-pattanam, Bharukaccha and Surparaka; and it was practicable to attain to any of them starting from up the Ganga, not only from Campa (Bhagalpur) but even from Benares.

The Samudda-vanija Jataka (iv. 159) relates how a settlement of wood-workers, failing to carry out the orders for which pre-payment had been made, made a ‘mighty ship’ secretly, and emigrated with their families, shipping down the Ganga, by night, and so out to the sea, till they reached a fertile island. The Mahajanaka Jataka (vi, 34) tells us that prince Mahajanaka set out for Suvannabhumi from Campa.

The Baveru-Jataka indicates “that the Vanijas of Western Bharat undertook trading voyages to the shores of the Persian Gulf and of its rivers in the 5th, perhaps even in the 6th century B.C. just as in our own days.”

The Mahabharata relates how the Pandavas, ingeniously escaping from the ‘house of lac’ by a subterranean passage, came upon the Ganga and got on board a vessel, which ‘was provided with machinery and all kinds of weapons and was capable of defying storms and waves’.

Naval warfare was also well-known in the days of Manu, for he had laid it down that boats should be utilised for military purposes when the theatre of hostilities abounded in water.

Yuktikalpataru, specifies a class of boats called agramandira (because they had their cabins towards their prows) as eminently adapted for naval warfare.

King Harsa of Kanauj must have possessed a certain number of war-boats which accompanied him in his distant expeditions. His inscriptions always refer to his victorious camp as “furnished with ships, elephants and horses”: ‘mahanau- hastya-sva-jaya-skandhavarat’.

At about the same time, the Calukya princes of the South appear to have maintained a considerable naval force. In the Nilgunda Plates of Vikramaditya VI, it is said that king Mangalisa of the western Calukya dynasty fitted out a grand fleet, which captured the island of Revati. From the Aihole inscription we learn that with a fleet of hundred fighting vessels Pulakesin II attacked Puri, which was the mistress- of the sea, and reduced it to submission. The Kendur Plates of Kirtivarman II tells us that Pulakesin’s grandson, Vinayaditya, sailed out to Ceylon, humbled its king and compelled him to pay tribute.

Epigraphic evidence indicates that harbours and dockyards had come into existence as early as the 6th century. A copper-plate grant of Dharmaditya (dated 531CE) refers to a navata-kseni or ship- building harbour though we do not know where it was located.

During the reign of Raja Raja and his son, there were a complex classification of class of vessels and its utility. The close diplomatic ties between the Song dynasty of China and the Medieval Cholas facilitated many technological innovations to travel both ways. The more interesting ones to have reached Chinese shores are:

Apart from class definitions, there are names of Royal Yachts and their architecture. Royal Yacht’s classification are:

In addition to these, we find many names of Ship classes in Purananuru and its application in both inland waters and open oceans. Some of them are:

In the picture below, depiction of a Boat on a seal from Dholavira dating back to 3-2nd millennium BCE can be noticed. Boat seems quite sophisticated with a pavilion at the center of the boat/ship. More can be read here.

The picture below is a model of a Chola Ship’s hull, rebuild by Archeological Survey of India based on a wreck 19 miles off the coast of Poombuhar. It is displayed in a Museum in Tirunelveli. 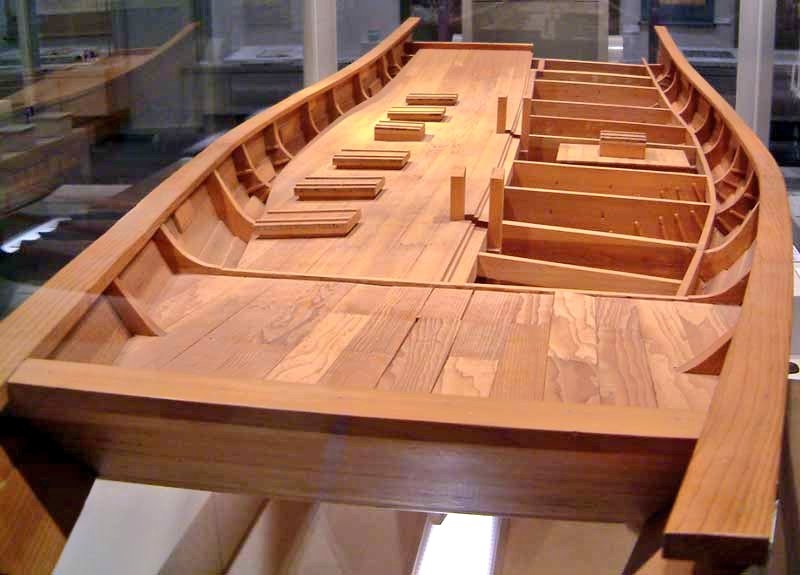 The following picture is a coin of VashishthiPutra Pulumavi, depicting double masted ship Dated: ~2nd century CE or older. This is testimony to naval, seafaring and trading capabilities of Satavahana kings. 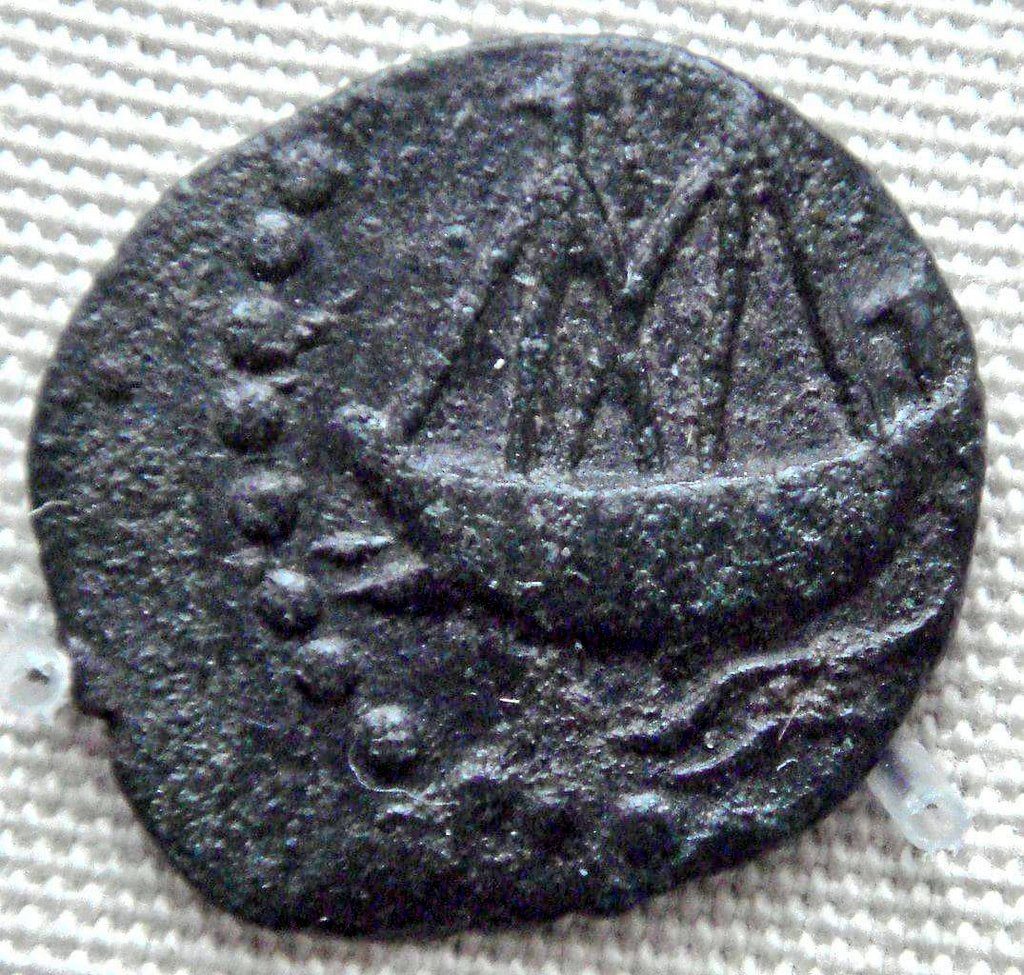 It is interesting to note that Bhoja recommended to avoid iron in building Ships. YuktiKalpaTaru’s classification of Ships is as follows. Note the proportions of L*B*H of ships of each category. 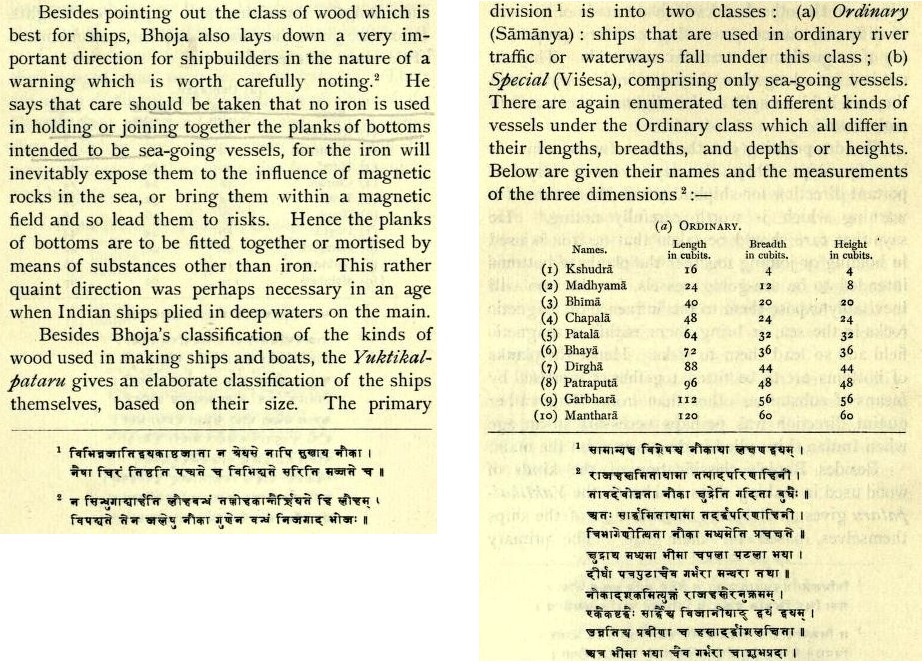 Faxien along with 200 other passengers travelled from Srilanka to Java in 5th century. He described ship: “astern of the great ship was smaller one as a provision in case of larger vessel being injured or wrecked during the voyage”. Now compare it with what is described in the picture below: Relief depicting naval vessel, Borobudur Temple, Java(Indonesia) Dated: 8th century CE or older even before the accounts of the 1st century BC, there were written accounts of shipbuilding and war-craft at sea. 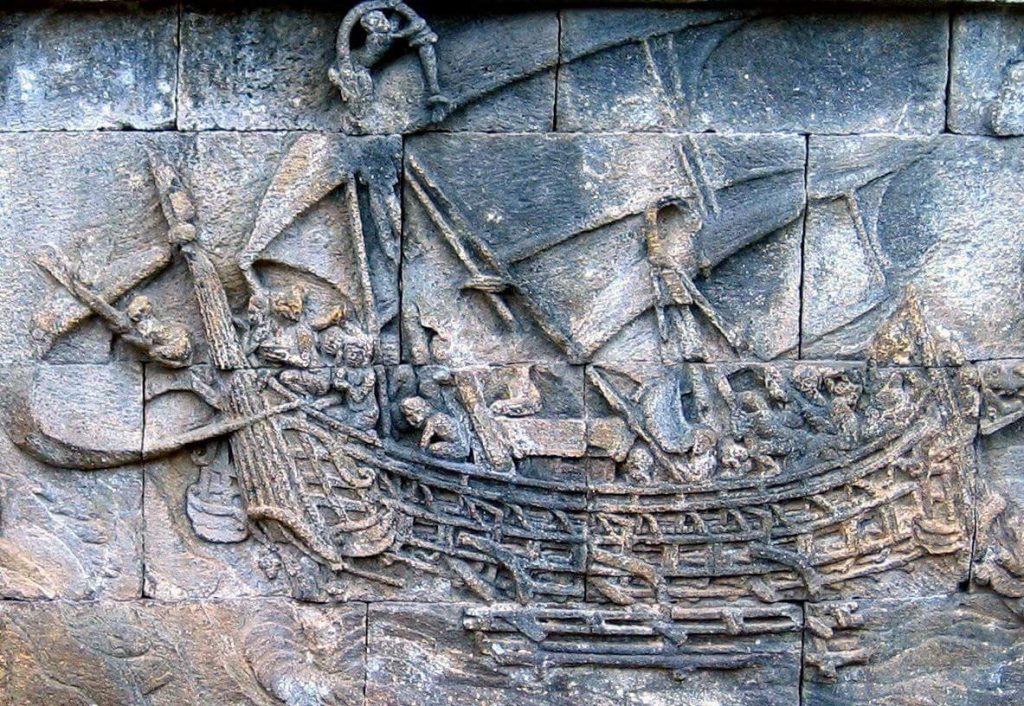 Professor R.C. Majumdar says that there existed a comprehensive book of Naval-architecture in Bharat dating back to 2nd century BCE, if not earlier.

However, according to colonial British and Portuguese accounts, Hindu Dharma forbade its adherents from “crossing the sea”, or undertaking voyages abroad. But the facts above show another picture where Hindus from ancient Bharat dominated the seas and naval defence system. Once, Bharat dominated the economy of the Indian Ocean basin, peacefully. However, European barbarity destroyed it.