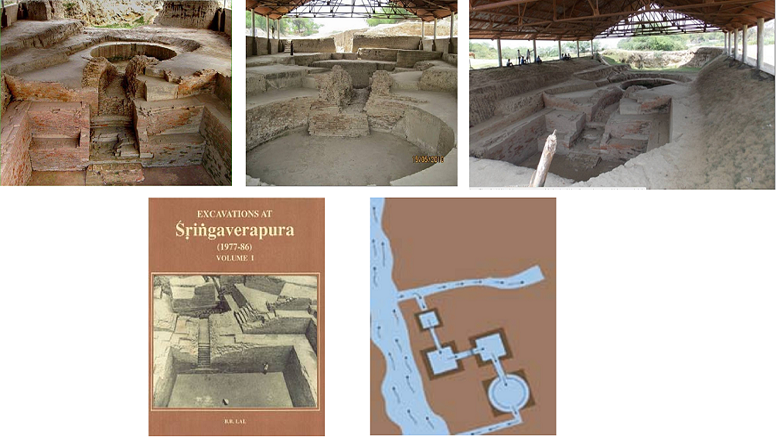 TrueIndology is a social media handle that all Hindus should follow. Single-handedly, this account has demolished many pernicious myths peddled by ’eminent historians’ and brought to light several hidden facets of our civilisational heritage.

Here we reproduce his recent Facebook post about an amazing water reservoir unearthed at a historical Ramayana site in modern-day UP:

Shringaverapura (modern Singraur, UP) was mentioned in Ramayana as the capital of the famous Nishada king Guha.

According to Ramayana, it was here that Guha offered unparalleled hospitality and forded Bhagwan Rama across Ganga. This place was named after Rishi Shringa who also a temple dedicated to him in the vicinity. Shringaverapura is also mentioned in Mahabharata as a the sacred Tirtha (pilgrimage centre) and the place where Rama crossed the Ganga. There are people who dismiss Ramayana as fabrication in its entirety. But the fact is that excavations have unearthed ancient cities at most of the sites described by Ramayana. And what they found at Shringaverapura was truly mind-blowing.

Excavations here have unearthed a monumental reservoir built for rainwater harvesting and distillation which is a marvel of Hydraulic engineering. It comprises three percolation-cum-storage tanks, fed by an 11 m wide and 5 m deep canal that used to skim the floodwaters off the monsoon-swollen Ganga.

Water from the canal first entered a silting chamber where the dirt settled. This relatively clean water was then directed to the first brick-lined tank (Tank A), then on to Tank B through a stepped inlet (which cleaned the water further). This tank constituted the primary source of water supply. Next, the water passed to a circular Tank C, which had an elaborate staircase. An elaborate waste weir, consisting of seven spill channels, a crest, and a final exit, ensured that the excess water flowed back into the Ganga.

Its capacity was 2 million liters. it was probably the world’s largest reservoir of its time.

Shringaverapura marks easternmost extent of Ochre Colored Pottery dating back to at least 11th century BC. Ship networks forded passengers across Ganges, as had Guha in Ramayana.

How many of us know about it? Why do Bharatiya school textbooks not teach our children their heritage?

Source of information about Shrinagverapura excavation: Excavation at Śṛiṅgaverapura: (1977-86) – B. B. Lal