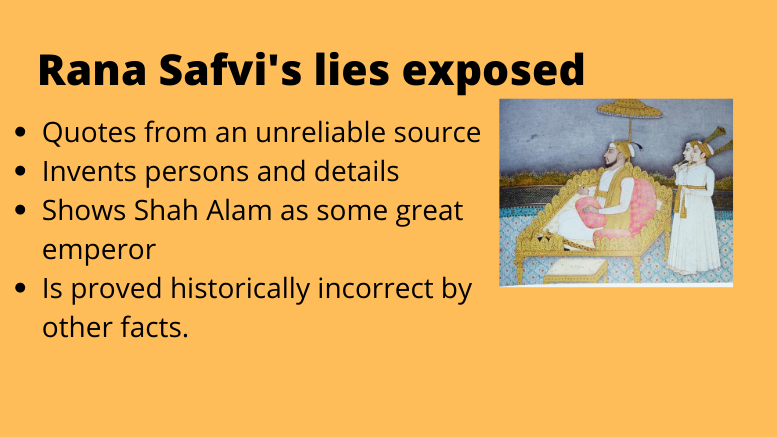 India’s eminent academics possess the art to transform lies into truth and rumors into history. They use this art at various levels, but nowhere is this art used as effectively as in history writing. Thus, cruel and bigoted Muslim rulers are transformed in benevolent monarchs and Hindu rulers are either erased from History or referred to as cruel casteist brutes, who danced to tunes of vile Brahmins. This article exposes Rana Safvi’s claims about Mughals celebrating Rakshabandhan in Delhi.

This whitewashing of history also works on the level of appropriation of culture. It works on the physical level in the occupation of Hindu holy sites by Mosques. On the level of narrative, Hindu festivals are either proved to be regressive, destructive to environment, painful for animals etc. or even wiped clean of their Hinduness. The Hindu festivals of Basant Panchami, Baisakhi, Pongal and now Rakshabandan are attempted to be cut from their roots.

The AMU historian Rana Safvi is quoted in a newspaper as saying that Raksha Bandhan is a Mughal festival.  For more authenticity, let me quote from her personal website, from an article titled “The Mughal Emperor and his Brahmin sister“. Please remember I have quoted without any change and not corrected even the spelling mistakes:-

“Alamgir II was a very pious man and had great faith in Sufi faqeers ( menndicants). Whenever he heard a faqeer had come to Delhi he would call him to the Fort and if he didn’t come would go to meet him, himself. Imad-ul-Mulk spread the rumour of a very esteemed faqeer coming for a visit to Delhi and staying in Firoz Shah Kotla. The rumours were that he didn’t go anywhere or meet anyone. As these rumours were cleverly fed to the Emperor his anxiety to meet the faqeer grew. One night he set off alone to the Kotla.

He was set upon by the wazir’s men and brutally killed. The Emperor’s body was thrown into the River Yamuna. A Brahmin lady named Ram Kumari / Kor was passing by on her way for early morning puja of the Yamuna. She saw the dead body and recognised it as that of the Emperor. The Mughal Emperors always enjoyed the goid will of their subjects – Hindu & Muslim alike. She immediately sat down there and kept his head on her lap and crying softly waited for dawn. At dawn she was joined by other worshippers of the Yamuna. They all sat with their Emperor till help came. Shah Alam II called Ram Kumari and declared her to be his sister. He rewarded her.

After that on every Raksha Bandhan she would come and tie a rakhi on his wrist and he would gift her clothes as is the norm.“ Let me point out the holes in this little story:-

Rana Safvi wants us to believe that this miserable pedophile introduced Rakshabandhan in Delhi and she invents an story with holes the size of craters for it!

Other attempts on Rakshabandhan

This is not the first attempt at appropriating Rakshabandhan. The story of Humayun and Karnawati is often told to say that this festival started when Karnawati sent Rakhi to ask help from Humayun against Bahadur Shah of Gujarat. This story is as fake as the one above. A few points are worth mentioning:-

Clearly, this is another invented story to show Mughals as secular Kings. Indeed, this story is not told in any of the Mughal official histories!

The propaganda machine of Marxists and Islamists is quite well oiled. They can change history before our very eyes. The recent Delhi riots were branded as Muslim genocide despite these being planned by Tahir Hussain, executed by he likes of Safoora and Sharjeel, and financed by Zakir Naik.

The history textbooks are filled with such accounts that denigrate Hindus and glorify Mughals. Rana Safvi and her friends from AMU and JNU have been muddying the waters of history since many decades. The aim is to manufacture such Hindus, who are devoid of any pride in their past. Their success depends on us not exposing them. As long as Hindus support the voices that expose them, there is hope.