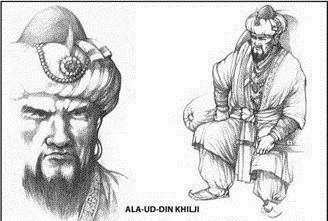 Ala-ud-din Khilji is much in the news these days due to the Padmavati controversy.  While I do not wish to express any views on the movie as such, I wanted to address some of the comments by our Marxist/liberal savants who wish to portray Ala-ud-din as some sort of progressive.

Some outlets are even busy extolling his virtues as an economist –

The temple of Somnath has been a beacon for Islamic destroyers since Mahmud Ghazni’s first invasion and destruction of it.  The last of the destructions was by Aurangzeb.  A lesser known in-between destruction was done by Ala-ud-din Khilji.  It was one of the many many temple destructions this man did throughout Bharat.  Somnath was destroyed no less than six times by Islamic iconoclasts (searching “Somnath six destructions” throws up multiple articles on this).

In short, the Muhammadan army brought the country to utter ruin, and destroyed the lives of the inhabitants, and plundered the cities, and captured their offspring, so that many temples were deserted and the idols were broken and trodden under foot, the largest of which was one called Somnãt, fixed upon stone, polished like a mirror of charming shape and admirable workmanship. Its head was adorned with a crown set with gold and rubies and pearls and other precious stones, and a necklace of large shining pearls, like the belt of Orion, depended from the shoulder towards the side of the body.

The Muhammadan soldiers plundered all these jewels and rapidly set themselves to demolish the idol. The surviving Kafirs (Hindus) were deeply affected with grief, and they engaged to pay a thousand pieces of gold as ransom for the idol, but they were indignantly rejected, and the idol was destroyed, and its limbs, which were anointed with ambergris and perfumed, were cut off. The fragments were conveyed to Delhi, and the entrance of the Jãmi Masjid was paved with them (so that Muslims may step on them), that people might remember and talk of this brilliant victory. Praise be to God, the Lord of the worlds. Amen!

This, and many other accounts, summing to over 150 pages, can be found in Sita Ram Goel’s scholarly classic “Hindu Temples: What Happened to Them?”, which is freely available online at http://www.voiceofdharma.org/books/htemples2/