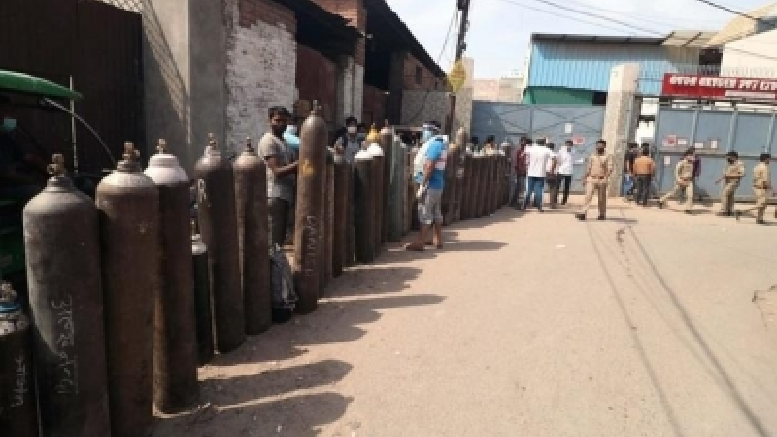 At a time when several states are reeling under the impact of oxygen shortage amid the raging pandemic, a businessman in Uttar Pradesh’s Prayagraj has initiated a plan to set up an oxygen plant in the city with a capacity to feed requirements of, at least, three government hospitals free of cost forever.

After getting the nod from the district magistrate, the project has started taking shape on a 7,400- square meter plot in Naini industrial area of the district and will be a boon for Beli, Dufferin and Colvin hospitals.

The businessman, Umesh Jaiswal, said that the plant would have a daily production capacity of 1,100 cylinders. He said that three government hospitals of the city have been adopted for free of cost supply of oxygen.

Jaiswal is into the business of road construction and presently, his company is constructing parts of some important national highways connecting Prayagraj to different neighbouring districts.

“I was never into medical business but when I read about the recent deaths due to oxygen shortage, I decided to set up this plant. Initially, my plan was to set up a small unit but some of my close friends and advisors suggested that if I want to serve the society, the project should be bigger,” he said.

Jaiswal said that he spoke to SSP Prayagraj, Sarvashresth Tripathi, who helped him meet the divisional commissioner, Sanjay Goyal, who in turn, forwarded his proposal to the concerned authorities.

“The district magistrate gave his approval and now all the paper formalities have been done and I have given order to a Gujarat-based company for installing the state’s maiden automatic oxygen synthesis plant where both, liquid oxygen and its gaseous form, will be manufactured simultaneously,” he said.

This would be second such plant in the country, the first being installed at Godhra by the same company.

Jaiswal has adopted three government hospitals of the city, namely Beli, Dufferin and Colvin hospital, and would be giving free oxygen to them.

The plant, being constructed at a cost of Rs 14 crore, is coming up in sector III of Saraswati Hightech city, Naini and the registry of the land would be done in a couple of days.

The capacity if needed, could go up to 1,500 cylinders per day. The production is expected to start from August, this year.