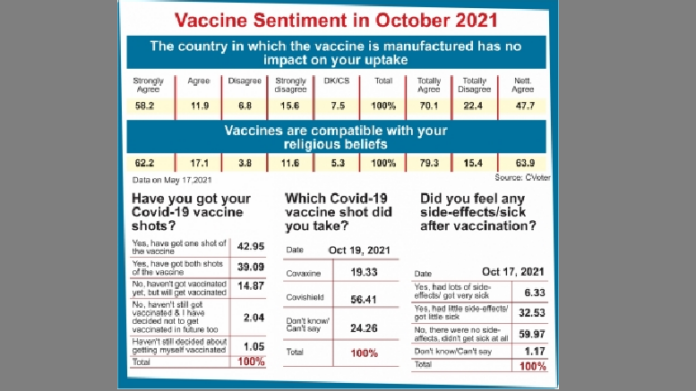 Bharat is the most pro-vaccine country in the world as 98 per cent of its eligible population want to get vaccinated against Covid-19, as per the IANS-CVoter Vaccine Tracker.

The data comes on a day when Bharat reached the milestone of 100 crore vaccinations, and demonstrates that lack of vaccine hesitancy has played a big role in achieving this number.

CVoter Founder Yashwant Deshmukh said that Bharat is the most pro-vaccine country in the world and at all times, 90 per cent or more wanted to get vaccinated.

The talk of vaccine hesitancy being high in Bharat that may hold up the vaccination drive may have been a false narrative, Deshmukh said.

As many as 82 per cent of the eligible population has already received one dose of the Covid vaccine while 39 per cent have recived both the doses.

While Bharat is intensely pro-vaccine, vaccine hesitancy is higher in Europe by 5 times and in the US by 10 times, as compared to Bharat.

In the vaccination drive, the entire population may not be counted, as the eligible population is only above 18 years.

Only 2 per cent have said they do not want to get vaccinated, as per the tracker. The vaccine hesitancy was 12-13 per cent a year back, which has come down to only 2 per cent now.

In the tracker, when asked if the country of origin of the vaccine has no impact, 22.4 per cent disagreed and 70.1 per cent agreed with the notion. The 22.4 per cent represents aversion to Chinese vaccines.

A total of 15.4 per cent in the tracker disagreed with the notion that vaccines are compatible with religious beliefs. Even though 15.4 per cent said this, almost 13 per cent also said they will take the vaccine, leaving the vaccine hesitancy at only 2 per cent.

Can Europe escape its looming energy crisis due to Ukraine-Russia war?