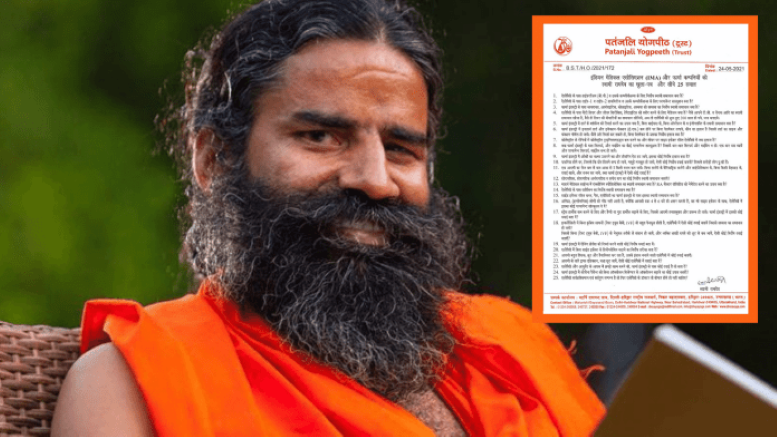 Baba Ramdev has issued a clarification in the IMA (Indian Medical Association) while asking 25 questions to both IMA and Pharma companies. The letter dated 23 May signed by Baba Ramdev says that he respects Allopathy and expects the same respect would be extended to Ayurveda as well while adding that the quote that has been attributed to him has been taken out of context.

Baba has stated in his letter to Health Minister Dr. Harshvardhan, that the quote attributed to him was the one made by him during a worker’s meet where he was reading out a WhatsApp forward message. He also said that he admits Allopathy has made progress over the years in treating patients but pointing out its drawbacks shouldn’t be construed as attack on Allopathy as a medical field and certainly not as opposition to science.

Baba further said that similarly Allopathy doctors shouldn’t disrespect ancient Bharatiya science of Ayurveda by referring to it as psued-science. Just has modern medicine has discovered cures for several ailments like TB and polio among others, we have found means to control and permanently cure diseases such as arthritis, BP, thyroid and others by means of Ayurveda, Yoga and naturopathy.

His letter adds that while they respect the fact that Allopathy doctors have put themselves on the line while saving lives during the present pandemic, he expects that they would also appreciate the fact that even Ayurveda and Yoga have been used to save many lives from the Chinese Virus pandemic.

In his letter dated 24 May, Baba Ramdev has addressed the IMA asking them 25 pointed questions. Baba has attempted to highlight the shortcomings of Allopathy by asking for permanent solutions for certain common ailments.

Earlier, IMA had taken offence to Baba Ramdev’s statement and written to the Union Health Ministry regarding the same. Ironically, however, the letter had been signed by IMA President Dr. Johnrose Austin Jayalal, an evangelical Christian who believes in ‘spreading’ Christianity irrespective of the profession one is in. He even wanted to use IMA as a platform to spread the “love of Jesus” and be a “living witness to God and encourage young medical students and doctors to receive Jesus as their personal saviour”.

He along with IMA Vice President Navjot Singh Dahiya, who is also a Congress leader from Punjab, have been making political statements from time to time, in addition to dissing Ayurveda. Dahiya even called PM Modi a ‘super spreader’. With evangelicals and Congress members controlling IMA, it is little wonder that the medical body has chosen to target Baba Ramdev.

It must be mentioned here that it was Baba Ramdev’s Patanjali which first published a research paper on on a new anti-Covid drug that has now been approved by DGCI and has been developed by DRDO in collaboration with Dr. Reddy’s Laboratories.