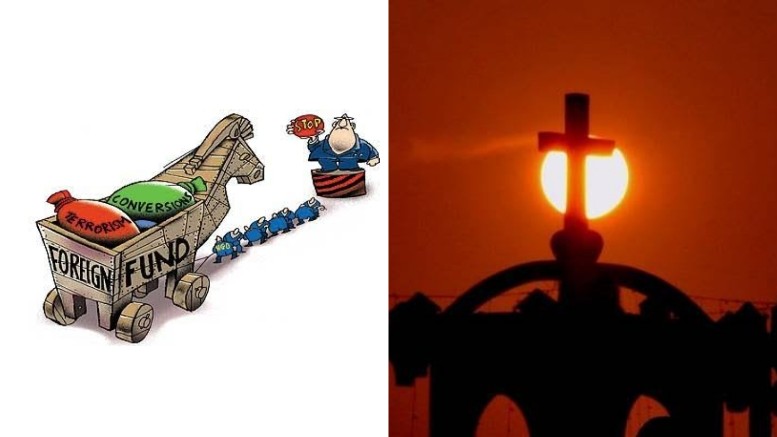 Many Christian NGOs involved in conversion activities have been booked by the CBI in the FCRA scam. The office bearers of these NGOs have been accused of bribing MHA officials to renew or accept their FCRA license applications. Notorious missionary organisation Harvest India, Indian Christian Ministries and Christ Life Center Ministries from Andhra Pradesh and Telangana have been mentioned by CBI in its FIR. The Presbyterian Church of North East has also been named in the FIR.

CBI had conducted raids in Delhi, Haryana, Rajasthan, Jharkhand, Himachal Pradesh, Telangana, Andhra Pradesh, Tamil Nadu, Assam and Manipur based on a complaint from the MHA. It arrested 14 persons including 6 officials of the department and seized an amount of Rs 3.21 crore. 36 persons including 2 former and 4 current employees of the FCRA wing, middlemen and representatives of the concerned NGOs have been named by CBI in the FIR.

Now details about the FCRA NGOs involved in this scam have come out. Harvest India operating from Vijayawada, Andhra is the most notorious of them all. MHA had suspended the license of the evangelist NGO in September 2021, after it received complaints about the violations of FCRA Act, 2010.

LRPF, a legal advocacy organisation, had written a letter to the ministry explaining the anti-Bharat activities of Harvest India and bishop Suresh Kathera. The bishop had made false and defamatory remarks about Bharat and Prime Minister Narendra Modi. While speaking at the Mission Conference 2018 held at Biola University, the USA in 2018 he said, “Pastors are beaten, churches are burning. Our Prime Minister, he is a bad guy. He doesn’t want any Christians in India. He wants to make India as only Hindu country. So many pastors killed in last 5 years.”

In another instance, he had said that he intended to carry out a ‘crusade in enemy stronghold Koduru, Andhra Pradesh’. Despite carrying out evangelical activities openly the Kathera family continues to claim them as SC Hindu. While replying to an RTI application the Guntur collector declared that Suresh Kathera is an SC Hindu. His wife won the Zilla Parishad elections as a member of the ruling YSRCP and was elected as the Chairman as well.

The NGO had taken out a procession and staged a protest against the suspension of its FCRA license. It accused LRPF as the reason behind the suspension. But it is now revealed that former MHA officials exposed LRPF’s complaint and evidence to Suresh Kathera and received a bribe from him to reverse the suspension.

TNIE reported that CBI investigation found that Suresh Kathera gave a bribe of Rs 4 lakh to one Ravi Shankar Ambastha for revoking its suspension and renewing the FCRA license. “Suresh Kumar agreed to pay a total sum of Rs 8 lakh to process his file and on April 22, Ambastha, who introduced himself as superintendent of the FCRA division, visited Vijayawada and took Rs 4 lakh from Suresh as first installment”, CBI officials told the media.

Christ Life Centre is run by one Alfred Mohanty. He met with the main accused Ambastha in a star hotel in Banjara Hills representing his uncle Arun Kumar Mohanty who runs AMG India International. He agreed to pay a sum of Rs.15 lakhs to help them in ‘sorting out’ their ‘problems’.

The National Commission for Protection of Child Rights has recommended that MHA cancel the FCRA license of AMG India International. LRPF which filed a complaint about the dubious activities of AMG said that sensitive information like images, videos, date of birth, location, family and financial background of the minor destitute children taking shelter/studying at different homes/institutions run by AMG India International are appearing on the official websites of foreign organizations that fund the NGO.

This FCRA NGO was flagged by another advocacy organization, Legal Rights Observatory, which found out that it received Rs 14.41 Cr for child care from foreign donors and used it for conversions, running a suspicious child adoption racket with a child trafficking angle. ICM runs a church by the name ‘Covenant Church’ and an orphanage by the name ‘Covenant’s Children Home’.

ICM’s website says that Christian theological teachings and worship integral part of the children’s lives. In fact, it has a program Child Discipleship to prepare children to work for the ministry. It declared its mission as ‘making and mobilizing disciples of Christ to transform lives in India through the Church’. The page has since been deleted. LRO had exposed these illegal activities and wrote to NCPCR and the Home Ministry. ICM has also been named by CBI in its FIR.

Representatives and office bearers of these NGOs have been named by CBI in the FIR. Srijan Foundation based in Jharkhand receives funds from outrightly Christian organizations such as Terres De Hommes and DKA Austria. Ayries Multipurpose Social Service Society appears to be the ‘secular’ arm of the Pondicherry archdiocese. As per details given in NGO Darpan portal, AGS Juliana, Glory Thangam and Maburose Jesi Rani are its Chairman, secretary, and trustee respectively.

It is mainly funded by Ayres Trust in the United Kingdom whose website is curiously blank and says it runs a school and provides help for children and women affected by TB, AIDS, polio and cerebral palsy in the villages of Veerareddykuppam and Aladi in Cuddalore. A few months ago a man running another Christian FCRA NGO was arrested for sexually abusing girls housed in an orphanage run by him.

It is to be noted that even though all kind of NGOs were trapped in this scam, majority of them are Christian NGOs. Hindu Post has flagged the issue of Christian NGOs involved in conversion activities in the name of social service many times. Many such incidents were reported by the advocacy organisations LRO and LRPF as well. However instead of taking action on the complaints, the corrupt MHA officials appear to have taken the evidence produced by the organisations to the accused NGOs themselves and demanded bribe to not act on them.

Fortunately they were caught but the fact remains that FCRA brings more money than needed from foreign donors who think they are doing charity for a poor 3rd world country. However much of it is used for illegal activities like forced conversion, anti-national propaganda, anti-development protests, etc. Even though Hindu and other Indic organisations also receive funds through the FCRA route, it is very miniscule as most of it is from individuals living abroad.

Christian NGOs on the contrary receive money from churches in foreign countries and mammoth NGOs like Terres De Hommes, World Vision, AID and sometimes even from foreign government departments. For their benefit Bharat is shown as a poor, communal, unsafe country for children women and minorities. Children especially are shown as orphans to collect money from abroad and love a luxurious life in their name. So it is time that the centre repealed the FCRA Act altogether.