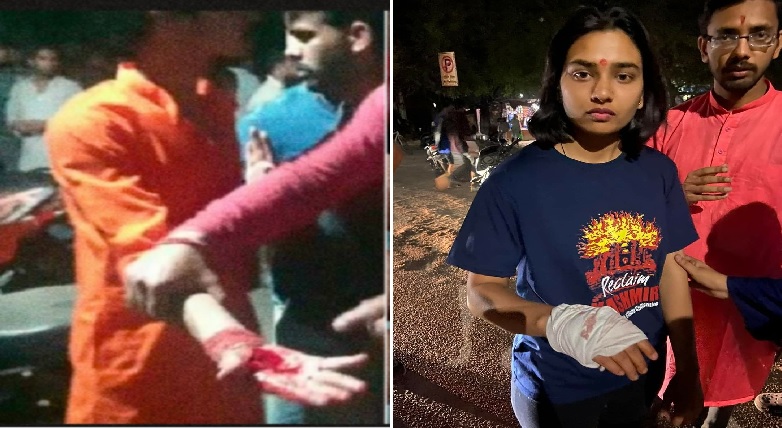 Several students were injured as clashes broke on Sunday at the Jawaharlal Nehru University (JNU) here between members of the Left alliance (CPM’s SFI, CPI-ML’s AISA, AISF, DSF) and the Akhil Bharatiya Vidyarthi Parishad (ABVP) after Hindu students were attacked for performing pooja on occasion on Ram Navami.

ABVP members said that members of the Left alliance including the NSUI were angry over a Pooja and Havan programme on the occasion of Ram Navami. Some have even alleged that meat pieces and stones were thrown on the students who conducted havan and pooja.

A student Divya recounted her horrific experience. She had gone to attend the havan at Kaveri Hostel with some friends when suddenly she was attacked by Leftist students who were hurling crass abuses as well. She was attacked with glass and suffered a injury to her hand.

The Left alliance accused the ABVP of ‘forcefully imposing a ban’ on non vegetarian food at the Kaveri Hostel. But ABVP has denied this charge and stated that non-veg was allowed in all 18 hostel messes. They said that a pooja and iftar were both conducted peacefully in Kaveri Hostel, but the celebration of a Hindu festival is what irked the Left Alliance.

JNU administration has also clarified that despite objections raised against the hawan, it was concluded ‘peacefully’. However, the agitated anti-Hindu students created a ruckus at dinner time and falsely claimed that there was a ban on non-veg food.

Leftists students seemed to have pre-planned this ruckus and assault –

News agencies like IANS and ANI have run headlines highlighting the Left allegation that the violence broke out over non-vegetarian food, while burying the charge by Hindu students, that they were denied from performing pooja, deep in their stories. This is yet another example of the everyday bias of mainstream English-language media. Even those considered ‘neutral’, often subtly insert anti-Hindu bias in their reports.