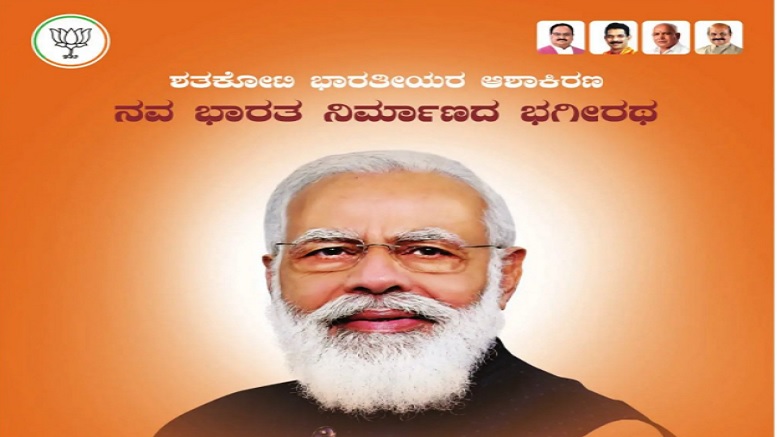 PM Narendra Modi turns 71 today. BJP is planning to conduct several events from today till October 7, when the PM took over as Gujarat chief minister 20 years ago.

“We have requested the administration of all the districts to provide barren land in every mandal which can be developed as a covered garden. We will spend money on boundary walls and tree guards. If we don’t get land, we will develop gardens, which are in dilapidated condition,” said Jitu Jirati, BJP’s vice-president for Madhya Pradesh.

This year, there has been an extra buzz around the PM’s birthday – one doesn’t remember so much publicity in years past. From full-page ads splashed in Kannada newspapers by partymen, to unnecessary comparisons to Bhagwan Vishwakarma by individual supporters – such adulation is excessive and over the top. Routine wishes to the PM on his birthday are perfectly fine, and indicative of a healthy regard for the country’s leader who by all accounts follows a grueling personal schedule.

There is no argument that Narendra Modi has been one of the most impactful leaders the country has seen. And a big part of electoral politics is creating an image and selling that to voters – Modi’s development track record is second to none, so his image is based on a solid foundation and he enjoys a connect with voters like no one else.

But popular politicians across the world have to constantly guard against a cult developing around them. There will always be those who believe in singing paeans to the leader and in obsequious displays of loyalty. If such people are not discouraged, the behavior is soon copied by others and before you know it, you are surrounded by yes-men.

There are 3 other reasons why BJP must guard against a personality cult developing around the PM.

Avoid being clubbed with Nehru-Gandhis

In Bharat we have already seen cultish behavior play out in politics to the nation’s detriment. The incessant glorification of the Nehru-Gandhi dynasty brainwashed the descendants of an at least 5000-year-old civilization to believe that everything good about the nation flowed from a single political family. This hero worship was then mimicked by followers of leaders like Jayalalitha, Laloo, Ambedkar, Mamata and so on.

Such hero worship is by no means unique to Bharat. Mao Zedong was idolized in China during his 27-year-long rule, yet the country remained poor. It was Deng Xiaoping who introduced the pragmatic reforms that propelled Chinese economy forward. Deng never fostered the same personality cult as Mao, and focused on institutionalization instead. His philosophy was ‘build/hide your capabilities, bide your time’. And today under Xi Jinping, China is done biding its time. It’s another matter that Mao still remains a Godlike figure in China, sort of like how Gandhi looms over Bharat and Lenin over Russia.

The son of a chaiwallah should retain that humble touch which endeared him to voters.

Also, leaders should be memorialized after their stint in office is done and dusted. That is why actions like Nehru and Indira being conferred Bharat Ratna while in office, or Nehru’s birthday being anointed “Children’s Day” while he was PM, or the hundreds of stadium, parks, colonies, airports, schemes etc being named after Nehru-Gandhis by their own governments – all of this invokes a sense of repulsion in citizens today.

From that perspective, the renaming of the magnificent Motera stadium in Amdavad earlier this year as the Narendra Modi Stadium by the Gujarat Cricket Association was ok, as Modi had served as CM of Gujarat from 2001 to 2014 with distinction.

Focus on civilization heritage instead

Hindus have forgotten their civilizational heritage. Most people don’t remember the names of great kings & queens, rishis, philosophers, scientists, writers, artists etc. Every region has its own beautiful culture and traditions that are dying.

Name public buildings, parks, roads, bridges, government schemes etc. after these forgotten icons. The civilizational pride it will generate and long-lasting impact will reap you much more benefits at the voting booths.

In fact, we should consider an unwritten moratorium on naming anything after any politician from the 20th century onwards – no more Gandhi, Nehru, Ambedkar, Patel, Lohia etc. These leaders have been over-saturated in the public mind. Let’s share that mind-space with Panini, Sushruta, Lachit Borphukan, Rani Abbakka and so many more.

Much more remains to be done

Hyper-praise and glorification creates the impression that everything is going great. 7 years of Modi’s rule have indeed been a great relief for Bharat’s citizens. High-level corruption and terror attacks have been curbed, delivery of government schemes is much more efficient – to name just two things which seemed impossible during UPA rule.

But a lot-lot more remains to be done before we achieve the dignified, secure existence that people of Bharat deserve. To make an analogy: earlier we were drowning, now a life-saving buoy has been thrown. Yet, we are still afloat on the open seas, far away from land!

The biggest challenge facing us is the colonised ruling class and old elite. They look down at Dharma, at the culture, history and religion of the majority, and are preventing fundamental reforms in education, judiciary, bureaucracy without which we cannot fulfill our potential.

The fires of minorityism and state-sanctioned feudalism (aka casteism) are raging ever more fiercely. The pandemic has dealt a heavy blow to the economy, and double digit growth looks like a distant dream. Illegal protests have crippled the capital region. Hindus in West Bengal, Mewat and many other ‘communally-sensitive’ areas are being persecuted. Citizenship to Hindu refugees and deportation of illegal immigrants remain vexed issues with no resolution in sight.

Conversion mafia is rampant, particularly in states like Andhra Pradesh. Hindu festival celebrations are being gradually whittled down through the courts-NGOs-activist-politician nexus. Our temples are still being looted by the secular state.

The PM and BJP haven’t exactly covered themselves with glory on some of these issues.

The limits of PM Modi’s powers have become starkly obvious over the last 7 years. We cannot expect Deng Xiaoping-like results from Modi, because there are just too many entrenched, vested interests working against him. Unlike one-party China where the party-state apparatus pulls in one direction, in Bharat most political parties are focused on ruling over their regional fiefdoms, and long-term national goals come a distant second.

Yet Modi’s opponents peddle the false charge of authoritarianism and fascism against him, because they want a return to the days when left-liberals held complete sway and discussions about a post-Hindu Bharat were acceptable in the mainstream.

The response to this vilification by Modi’s opponents should not be his glorification, and the creation of an ‘All is Well’ buzz. People of Bharat need to be told in no uncertain terms that a lot remains to be done. Each of us has to come out of our comfort zones to fight for fundamental reforms in the very nature of our state, if we are to reclaim our status as a sovereign civilizational nation.