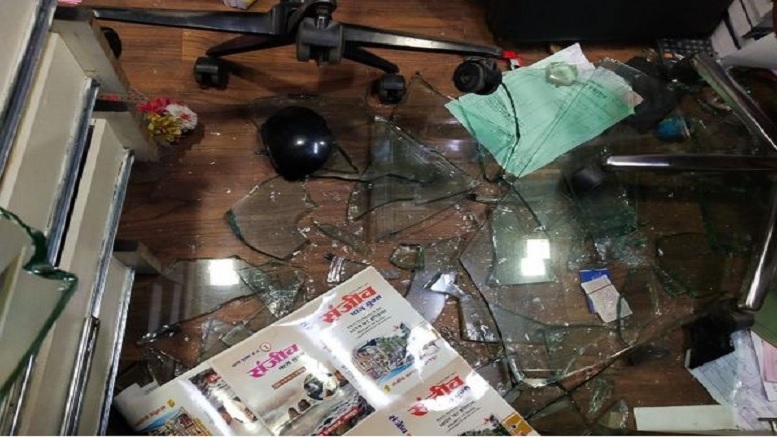 A group of local Muslims attacked the Sanjeev Prakashan office in Jaipur in alleged retaliation for content on Islamic terrorism that was published in a 12th Standard political science book way back in 2017.

Here’s the interesting part: the content in question was removed by the publisher after recalling all books when the objection was first raised; and they even apologized in writing. Yet, they started receiving threat calls few days back. A police complaint was lodged and 3 police constables were deputed to the publisher’s office for protection.

Yet, on Wednesday afternoon 4-5 men barged into the office and vandalised it while a mob of 30-40 stood outside; it is alleged that the policemen who were supposed to be on duty at the time did nothing! The office was thoroughly ransacked, books were torn and burnt, furniture was destroyed and the assailants escaped by the time more police arrived. Police now claims to have arrested 3 people for this violence.

This is the question and answer which upset the Islamists:

Question: What do you understand by Islamic terrorism?

Answer: Islamic terrorism is a form of Islam, which has become extremely powerful in the last 20-30 years. In these terrorists, there is no feeling of dedication to a particular group, rather they have a feeling of dedication to a particular community. Commitment to their community is the main characteristic of Islamic terrorism. Self-sacrifice and unlimited barbarity, blackmail, forced extortion, and cruel, heinous murders in the name of their belief or Allah have become the hallmark of such terrorism. Terrorism in Jammu and Kashmir falls completely in the category of religious and separatist.

Sanjeev Prakashan said that the question has appeared in the state’s Secondary Education Board, and books by other publishers have given a similar answer. Anyone with a internet connection can study Islamic religious texts to understand what they have to say about treatment of kafirs (non-believers, especially ‘idol worshippers’) or the rewards of fighting jihad or holy war.

So despite the publisher withdrawing the book in question and republishing all copies after removing the ‘objectionable’ content, all to ensure that ‘religious faith is not hurt’, yet their office was vandalised! Clearly, the intent is to intimidate and send a message to society at large, and having a ‘secular’ government in power obviously helps.

Other traders in the area and local BJP leaders urged the police to take the matter seriously and to take strict action against the perpetrators of such crimes against publications. Almost a week after this attack, not one mainstream journalist or Lutyens’ intellectual has condemned this suppression of academic freedom.

Our textbooks are full of anti-Hindu vitriol, both explicit and subtle, but when someone calls for detoxification by following the standard procedure of forming new textbook committees, the Hinduphobes start howling ‘saffronization’. When a Dinanath Batra goes to court against an anti-Hindu book, he is mercilessly mocked and demonised, and courts are bullied to reject his petition to prove their ‘liberal credentials’.

But attacks such as this one on Sanjeev Prakashan, the hounding of female Urdu editor Shireen Dalvi, the 2009 siege of The Statesman newspaper’s office in Kolkata, the attacks on offices of Kannada Prabha and Jaykirana newspapers in 2010 – this doesn’t elicit a single word from the self-appointed defenders of free speech?

Will Hindus get heard for their legitimate demands to erase anti-Hindu hate in our textbooks and media, only if we resort to similar violence?

In Kerala, T J Joseph a professor had his hands chopped off by Islamic Fundamentalists of the Popular Front of India, lost his wife to suicide and his job, and finally, even his own church distanced itself from the poor man. This following a question where the professor wanted to check the grammar comprehension of his students and had quoted from another novel written by a Malayalam writer P T Kunju Muhammed.

Charlie Hebdo, the French satirical magazine was attacked thrice by terrorists with the latest one coming last year and 12 journalists belonging to the group have been murdered to date. Samuel Paty, another school teacher was also decapitated last year. This was done following rumors of a cartoon of Mohammed shown by him which later emerged were never seen by the girl who had ‘leaked’ the information about the cartoon.  A shocked French society hit the streets and the public anger brought about serious changes with the government bringing strict laws against Islamic radicalization.

Bharat too has to follow that path and should be strict and swift while dealing with such terrorists, before it’s too late.

Cricketer Amit Mishra shares video of pro-terror sloganeering at Srinagar mosque, condemns those who laughed and called The Kashmir Files a ‘lie’