This is a critical review by Shashwat Pandey, a Standard VII student, of his history text book in the form of a letter to its Publisher!

While reading the 7th class History book of mine, I was shocked to see that there are so many distortions in it. I will give you examples.

On the very first page of the book in the bottom right corner there is a box that says the following lines “The Hindus do not pay much attention to the historical order of things; they are very careless in relating the chronological succession of things, and when they are pressed for the information and are at loss not knowing what to tell say, they invariably take to tales telling”. This is very insulting for Hindu Dharma and it also gives the wrong impression on the children also. Why did you have to take such insulting lines for the first page of the book? And also can’t forget to mention that these lines are taken from the account of Al-Beruni, but when Al-Beruni came to Bharat, he wrote so many good things about Bharat and the Hindus, but why did you find this quote only to be capable of finding a place in your book, and that too on the first page?

Now one of the most shocking distortions was on a comic strip on page number 33 in which Razia Sultan is saying that ‘I will not discriminate between Hindus and Muslims, in my eyes all religions are equal.’ How could you say this? Razia was one of the many invaders who destroyed the Kashi Vishwanath Temple and raised a mosque over that place and named it as ‘Razia Mosque’. Please tell us the sources from which you wrote these things in the textbooks.

The 3rd example is from page 35 in the Kashmir column, in which you are saying that Zain-ul-Abidin is the greatest ruler of Kashmir and even called him the ‘Akbar of Kashmir’. You didn’t mention Lalitaditya Muktapida who expanded the kingdom of Kashmir from Iran to Tibet and from present day Kashmir to present day Madhya Pradesh. His empire was even bigger than that of the Mauryas and the Mughals in their peak time. He was the one who stopped the Muslim invasions of Bharat for a long time. And I am also pointing out that he ruled just under the limits of Medieval Bharat as he ruled from 724 CE to 764 CE.

On ‘Aurangzeb’my textbook says ‘‘Aurangzeb was a simple and god-fearing Muslim. Unlike other Mughal Emperors, he had a very simple lifestyle. He never wore costly robes or used gold or silver vessels. He even sewed caps and copied the ‘Quran’ to earn money for his use. Due to his simplicity he was called a ‘Zinda Pir’, a living saint. As a ruler Aurangzeb was short sighted and he gave up Akbar policy of tolerance. He became very unpopular when he introduced ‘Jaziya’. The policies of Aurangzeb pushed his empire to a decline.’’ 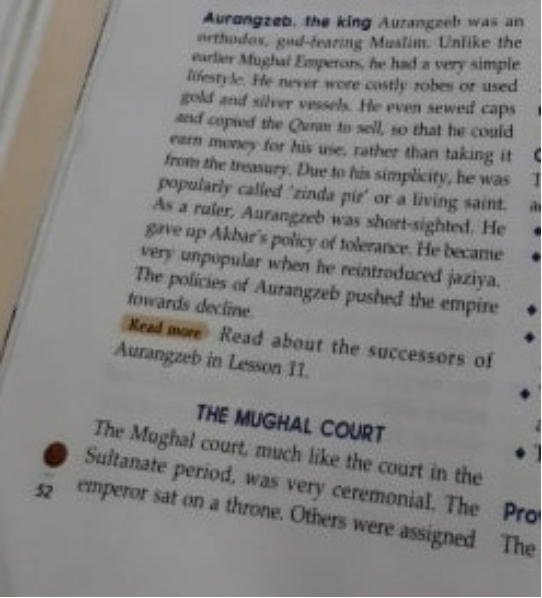 So, as you can see here the textbook says that, he [Aurangzeb] was a very simple man and summarizing his cruel part in hardly 4 lines. It is giving an impression that Aurangzeb was a just ruler and his only unwise decision was to introduce the Jaziya tax. But actually, all of us know that how cruel ruler Aurangzeb was. He gave the Farman of the destruction of all the temples in Bharat. He killed so many Hindus and meted out atrocities unthinkable, and the Jaziya tax that you are talking about was meant to be payed only by Non-Muslims.

If I were to tell people about the procedure with which he killed Shambhaji, the son of Chhatrapati Shivaji Maharaj then they will have sleepless nights. First, he was taken around the Mughal camp on a donkey with torn clothes, then his tongue was cut off and his limbs were uprooted and then his body was cut into several pieces and then those pieces were fed to dogs, and all of this was done on the order of Aurangzeb.

Such barbarism Aurangzeb committed, and also not to forget to mention that Aurangzeb killed Guru Teg Bahadur and his disciples ‘Bhai Jatidas’ and ‘Bhai Matidas’ in a very brutal and inhuman manner and the last Sikh guru ‘Guru Gobind Singh’ was also murdered on the order of Aurangzeb only.

This character of Aurangzeb’s which you gave in the textbook, in which you said that he was a pious and saintly man does not match with his real character at all.

This distortion comes from page number 117 in which its written that ‘Tipu Sultan’ was known as the ‘Tiger’ of Mysore, and which he undoubtably was, and it’s also written that he even tried to build a modern navy which all is true.

But you are taking sides here. In his own words, Tipu Sultan invited the son or the grandson that I am not sure, of Ahmed Shah Abdali to attack Bharat, and also, he wrote a letter to a general of his that ‘‘You know I had a big achievement over Hindus a few days ago, I was able to convert 3,00,000 Hindus to Islam.’’ And that letters are on record and they were written by Tipu Sultan himself.

This distortion is from page number 26 and 27 in which its written in the textbook about how Taimur came to Bharat, massacred lakhs of people and then with loot he had taken from the areas he had invaded he beautified his capital. But you did not mention Rampyari Gurjar and how she organised 40,000 women troops and also the 80,000 men so a total of 1,20,000 ‘‘Mahapanchyat’’ troops who attacked and killed almost 95% of Taimur’s troops, and let me clarify what I mean by 95% of the troops.

Taimur came to Bharat with almost 2,00,000 soldiers and left with only 5,000-10,000 soldiers. The rest of the troops were put to the sword by the Mahapanchyat warriors. Reference in Saffron Swords by Manoshi Sinha.

This distortion comes from page number 117 in which its written in a brown box in the bottom right corner that Tipu Sultan was the first person to use war rockets. But actually, they were first used by the Marathas even before the Third Battle of Panipat so that means it was used even before 1761! It’s even 20 years before Tipu Sultan even ascended the throne, and for evidence you can read the book of Uday S. Kulkarni the Solstice at Panipat. It’s in the third battle of Panipat. But it has a few paragraphs about how the Marathas used War rockets, and even he [Uday S. Kulkarni] took that information from the account of a European traveller who came to Bharat in the 18th century.

This distortion comes from page number 114 in which it is written that Mohammed Shah did not try to expand the Mughal kingdom and that the English were set to become the ‘Masters of India’. On this I wanted to say that the you are skipping the 60 to 80 year period in which the Marathas were the supreme and unchallenged power of the Bharatiya subcontinent.

They were so powerful that even the English feared them, and actually for a long period the Marathas were the king makers of the Mughal throne and the Mughals were just puppets in the hands of the Marathas instead of the Sayyid brothers. Again, the evidence for this is the book of Uday S. Kulkarni: Solstice at Panipat. 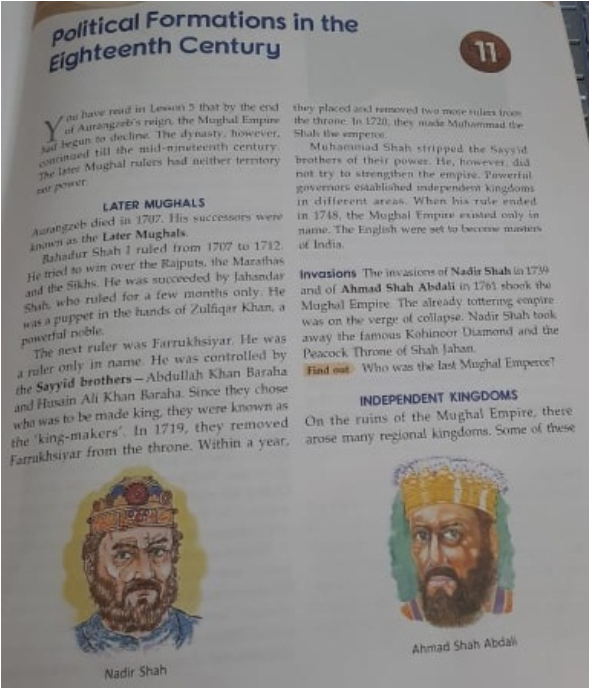 This distortion comes from page number 26 in which its written that Mohammed Firoz Shah was a reformer and that he translated the Sanskrit texts into Arabic and Persian. But in his Autobiography, he wrote about how he destroyed the Temples and took pieces from the Moortis he broke, put them in cow flesh and then wrapped them in the necks of Brahmins and paraded them throughout the city.

That’s all I wanted to say.

[NOTE: I was able to find out these distortions when I was just casually seeing the book and I am sure I can find more such distortions if I read the book completely.]

I hope you will be kind enough to enquire in the matter,

A video by Shashwat Pandey:

(This article was first published on the myindiamyglory.com and is being reproduced with permission, after minor edits to conform to HinduPost style-guide)